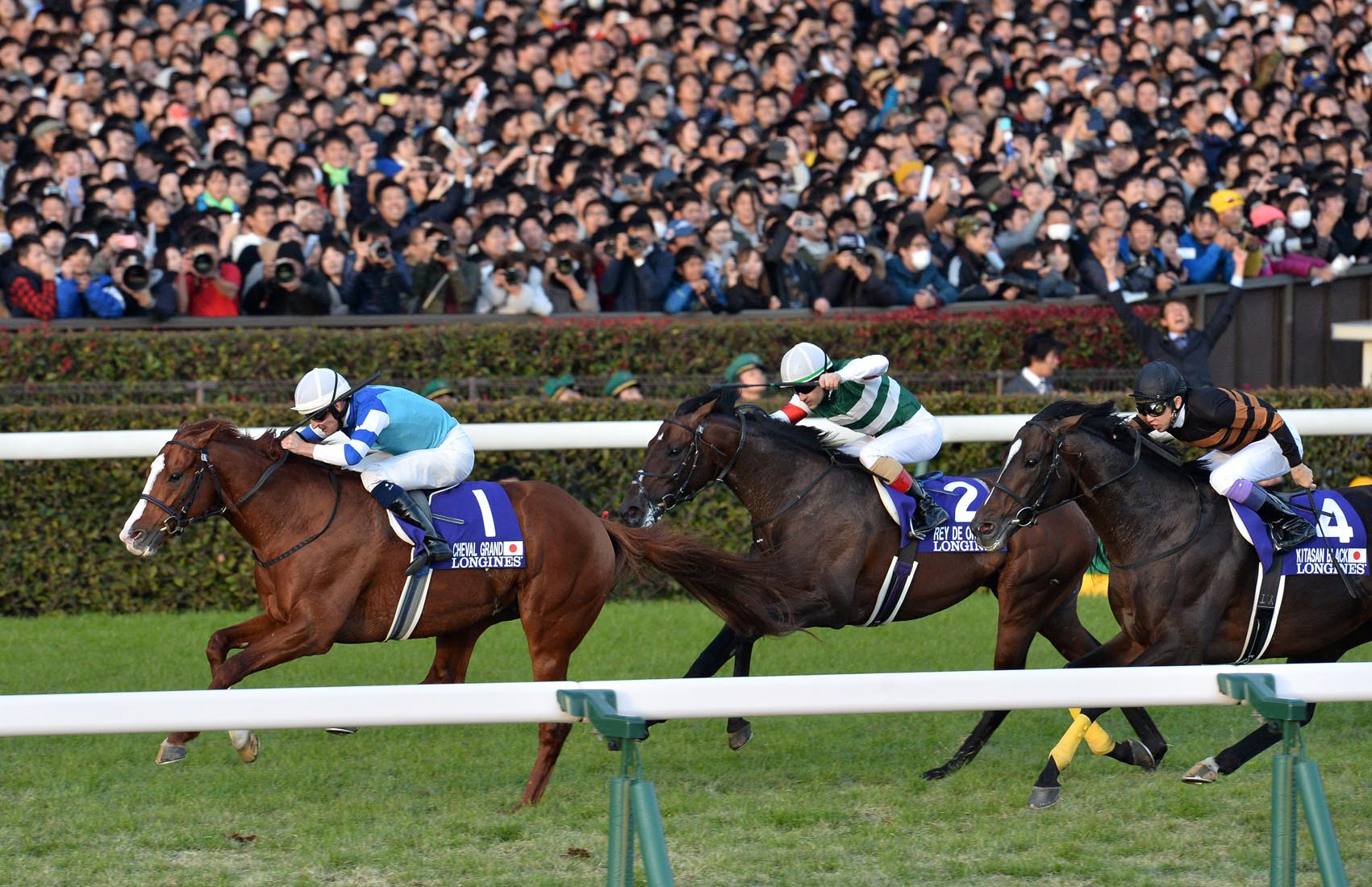 Since its inception in 1981, the Japan Cup has become one of the biggest dates on this nation’s racing calendar.

Held on the final Sunday each November, the 2,400-meter (approximately 1½-mile) race showcases top thoroughbreds, jockeys and trainers from Japan and overseas.

For racing enthusiasts, wagering on the event after arriving at the racetrack adds another element of intrigue. (Information on wagering on Japan Racing Association races at racetracks and off-track-betting facilities is outlined here.)

Foreign jockeys have enjoyed success across the decades in the Japan Cup, with foreign-born riders winning 24 of 40 races. Japanese riders have tested their skills against top overseas competition at the same time, increasing the appeal of the race for fans.

American jockey Cash Asmussen rode Mairzy Doates to victory in the first Japan Cup, followed by Canadian Don BacBeth aboard Half Iced and British jockey Brian Rouse on Stanerra in 1982 and ’83.

In 1984, Katsuichi Nishiura (Katsuragi Ace) was the first Japanese jockey to win the race.

A Legend’s Special Ties to the Japan Cup

Legendary jockey Yutaka Take, who was born in Kyoto, is the only four-time Japan Cup winner. His victories in 1999 (Special Week), 2006 (Deep Impact), 2010 (Rose Kingdom) and 2016 (Kitasan Black) added to his impressive list of achievements.

Aboard the late Deep Impact, a son of 1989 Kentucky Derby and Preakness Stakes winner Sunday Silence, for seven Grade I victories in his storybook career, Take’s career and the beloved thoroughbred’s attracted greater attention overseas, adding to the growing international recognition of the talent on display on an annual basis at the Japan Cup.

Iwata won his first Japan Cup aboard Admiral Moon in 2007, beating Peslier’s Pop Rock by a head’s length, then guided Beuna Vista and Gentildonna to back-to-back victories in 2011 and ’12.

A year later, British jockey Ryan Moore piloted Gentildonna to a Japan Cup win, making the Deep Impact-sired filly the first (and only) repeat champion in race history before a crowd of 97,000 spectators at Tokyo Racecourse, and a nationwide TV audience.

After the race, Moore proclaimed: “From what I’d seen of her, she’s never run a bad race. Every time, she’s shown up and either won or finished second or third. Her form this year, although she hadn’t been winning, she looked very good.”

Australian horse racing announcer Murray Johnson, who has worked for NHK radio and TV since 1991, has witnessed many of the biggest moments in Japan Cup history. He also articulated why the event is a big deal, both in Japan and overseas.

“The Japan Cup will always be high on the international calendar but fair to say the Japanese stayers have become so much stronger generally but on home soil in particular,” Johnson told JAPAN Forward.

He pointed out that “2005 was the last time a foreign horse (American-born Alkaased) won the race.

“This year,” Johnson added, “three overseas contenders are in the race with Japanese ownership in two of them, Japan and Broome, and legendary Irish trainer Aiden O'Brien trains them both.

“International jockeys get a brief opportunity to share in the big prize money so we will see two competing this year, Ryan Moore and Cristian Demuro.

“Once COVID restrictions ease in the future, more jockeys will be back to compete in 2022. It is difficult to beat Japanese horses on their own turf but this year at least we have horses visiting that could be competitive.”

Indeed, the late November showcase provides an exciting platform for good (and great) horses and elite jockeys to battle it out in a race that lasts a little more than 2 minutes, 20 seconds on grass.

Case in point: After Lemaire guided 5-year-old Vodka to victory in 2009, she was voted the Japanese Horse of the Year for the second straight year. Two years later, Vodka was inducted into the Japan Racing Association Hall of Fame.

Lemaire lived up to big expectations in 2018 and 2020 aboard Almond Eye. In a storybook ending, trainer Sakae Kunieda’s special equine closing out her career with a victory in the Japan Cup last year.

It was Almond Eye’s JRA record ninth G1 turf race win, and Lemaire couldn’t hide his sense of satisfaction in his post-race remarks.

“Since this was her final start, it was very special for me and I'm thrilled we were able to win,” Lemaire said.

He continued: “The pace was just right for her and she responded well in the stretch. The others closing in on us didn't worry me at all. Almond Eye is a perfect mare and doesn’t have any weak points.”

Like Vodka and Deep Impact, some of Almond Eye’s most glorious moments as a racehorse occurred in the Japan Cup ー and similar feats over the years have helped cement its importance on the Japan and global racing calendar.


Other Famous Names Connected to the Race

Stevens, a three-time Kentucky Derby winner, earned an 18-1 upset with a two-length triumph over Frenchy filly Magic Night before a crowd of 140,000 at Tokyo Racecourse.

It’s interesting to note that Japanese trainers have won 15 consecutive Japan Cups, while foreign-born trainers triumphed in nine of the first 11 editions of the annual event.

It’s another reminder of the Japan Cup’s connection to the biggest of the best in global racing.


See how the race works: Watch preparations and highlights from the Japan Cup in November 2020.