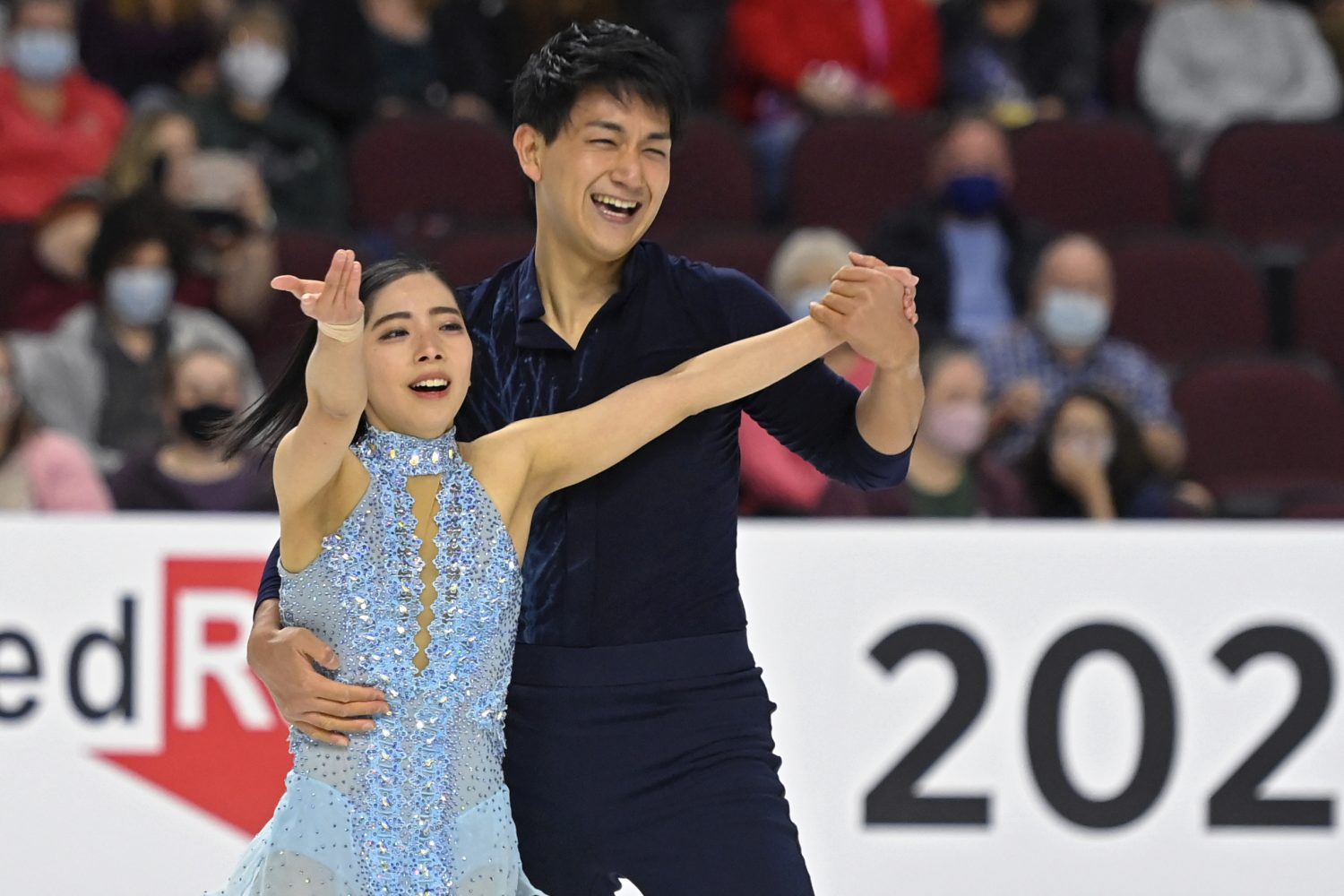 The competition at Skate America over the weekend was thick with drama as Vincent Zhou handed two-time world champion Nathan Chen his first defeat since the Pyeongchang Olympics some three-and-a-half years ago.

But there was an even more compelling storyline that emerged in Las Vegas, and that was the continued rise of Japan pairs Riku Miura and Ryuichi Kihara, who scored 208.20 points to claim their first Grand Prix medal ever, with a second-place finish behind Russia’s Evgenia Tarasova and Vladimir Morozov (222.50).

Miura and Kihara, who have been skating together for two years, made some noise last month with their victory at the Challenger Series Autumn Classic International in Quebec. Their performance at Skate America showed that their victory in Canada was no fluke.

The rise of Miura and Kihara now greatly improves Japan’s chances for a medal in the team event at the Beijing Olympics. Japan struggled to score points in pairs and ice dance at the team competitions in both Sochi and Pyeongchang, but that could change in China in February.

Miura, 19, and Kihara, 29, performed to “Woman” in their free skate at Skate America, and put on a sublime show with the exception of her fall on a throw triple lutz. Miura banged into the boards on the mishap and bruised her knee, but gamely got up and skated on. She did choose to skip the Gala Exhibition on Sunday, October 24 to give her leg a rest.

Their medal was Japan’s first in pairs in 10 years on the GP circuit, since Narumi Takahashi and Mervin Tran claimed the silver at the NHK Trophy in Sapporo back in 2011.

“We weren’t really hoping or aiming for a medal,” Miura was quoted as saying by NBC Sports. “We just wanted to show what we were doing in training. We’re obviously surprised we came in second.”

Miura is already looking ahead after the success in Nevada.

“Now we aim for another medal at our next Grand Prix event, and we would like to get 210 points,” Miura commented on the International Skating Union website. “We are taking it step by step.”

Miura and Kihara, who train in Oakville, Ontario, with Bruno Marcotte, will skate next at the NHK Trophy in Tokyo next month.

“We don’t have much time until the NHK Trophy, but we would like to return to the best condition first, and then practice again so that we can surpass ourselves this time by eliminating missing levels and small mistakes,” Miura wrote on Twitter on Sunday.

While the skating world was buzzing about Zhou’s win over Chen, Pyeongchang silver medalist Shoma Uno quietly began his GP campaign with a strong start at Skate America, taking second behind Zhou and ahead of Chen. Zhou’s winning tally was 295.56, while Uno notched 270.68 and Chen 269.37.

“I am honored to end up second,” Uno remarked. “This is a very high-level competition, it is amazing. But at the same time, when I look at my goals and what I am aiming at, I face the reality that I’m not there yet.”

“That performance by Shoma Uno, that free skate, feels like an Olympic free skate,” Weir said. “He is skimming these quads a little bit, but he rotates so quickly and is so secure. Jumps like that quad toe, when he does them, they are a thing of beauty.”

Though he cleanly landed just two quads, Uno had an inspired step sequence at the end of his skate that brought many in the crowd at Orleans Arena to their feet.

Zhou appeared stunned by his victory, the first at a senior GP in his career.

“I don’t think it’s sunk in yet,” said Zhou, after his free skate to “Crouching Tiger, Hidden Dragon.” “I didn’t really expect this result, but what I did expect of myself was to be as well prepared and well trained as I possibly could, and I think focusing on that every single day at home led to making the seemingly impossible seem possible.”

Chen’s loss in Las Vegas made him look vulnerable for the first time in ages, and will no doubt have fans of two-time Olympic champion Yuzuru Hanyu wondering if their hero’s chances for a third straight gold medal in Beijing have improved.

“It was inevitably going to end at some point in time,” Chen stated about his winning streak. “If anyone gets to break my streak, I’m glad it’s him (Zhou).”

Chen was fourth after Friday’s short program and admitted that he needs to dissect exactly what went wrong.

“I definitely think there needs to be more reflection,” Chen commented. “I don’t have a perfect answer right away. That’s definitely something that will be a priority for me.”

Shun Sato (247.05) put on a gutsy performance to take fourth place in his first senior GP outside of Japan. Sato injured his left shoulder in a fall at practice before the event and it clearly bothered him throughout the competition.

The 17-year-old Sato landed two clean quads and earned level fours on his spins in his free skate to songs from “The Phantom of the Opera.”

The results mean that Sakamoto will have a tough time qualifying for the GP Final in December in Osaka unless she is victorious at next month’s NHK Trophy, where Trusova, Young You, Rika Kihira and Rino Matsuike are all entered.

Sakamoto had a fairly clean free skate to “No More Fight Left In Me,” but placed behind Russia’s Daria Usacheva (217.31) and South Korea’s Young You (216.97) in the final standings.

Miyahara’s showing calls into question her chances of making the Japan team for Beijing. There are still two months before the Japan Championships, but barring injuries to other skaters, it is hard to envision Miyahara making it to a second Olympics.

Miyahara, who finished fourth in Pyeongchang, had three under-rotated jumps in her free skate to selections from “Tosca,” after having two under-rotations in the short program where she was eighth. In a sport that is increasingly dominated by the ability to land quads, her inability to hit clean triples is a real calamity.

The English book on Trusova, The Girl Who Defies Gravity (Aurum Press, 2021), written by Elena Zotova and released earlier this year, is now available as an ebook in Japanese after being translated by Hiromi Watanabe.

The excellent tome, which Ice Time reviewed in May, is available on Amazon Japan for ¥1,100. It traces the Russian phenom’s life from first stepping on the ice through her development into a quad-jumping sensation.

Skate Canada Up Next

The GP circuit travels to Vancouver, British Columbia, this week for the second stop of the series. Wakaba Higuchi, Mai Mihara and Mana Kawabe will represent Japan against a strong field that is scheduled to include Russia’s Alena Kostornaia, Elizaveta Tuktamysheva and Kamila Valieva, and Americans Karen Chen and Alysa Liu.

Keiji Tanaka and Sota Yamamoto will skate for the Hinomaru in a men’s event that will include Americans Nathan Chen, Tomoki Hiwatashi and Jason Brown.

The Figure Skating Federation of Russia reported on Monday that the entire Russian contingent, including the coaches, had obtained the visas necessary to enter Canada after a delay that at one point looked like it might prevent their participation.

Japan has no entries in either pairs or ice dance at Skate Canada.