‘He is Indispensable to Me’: Princess Mako Marries Kei Komuro 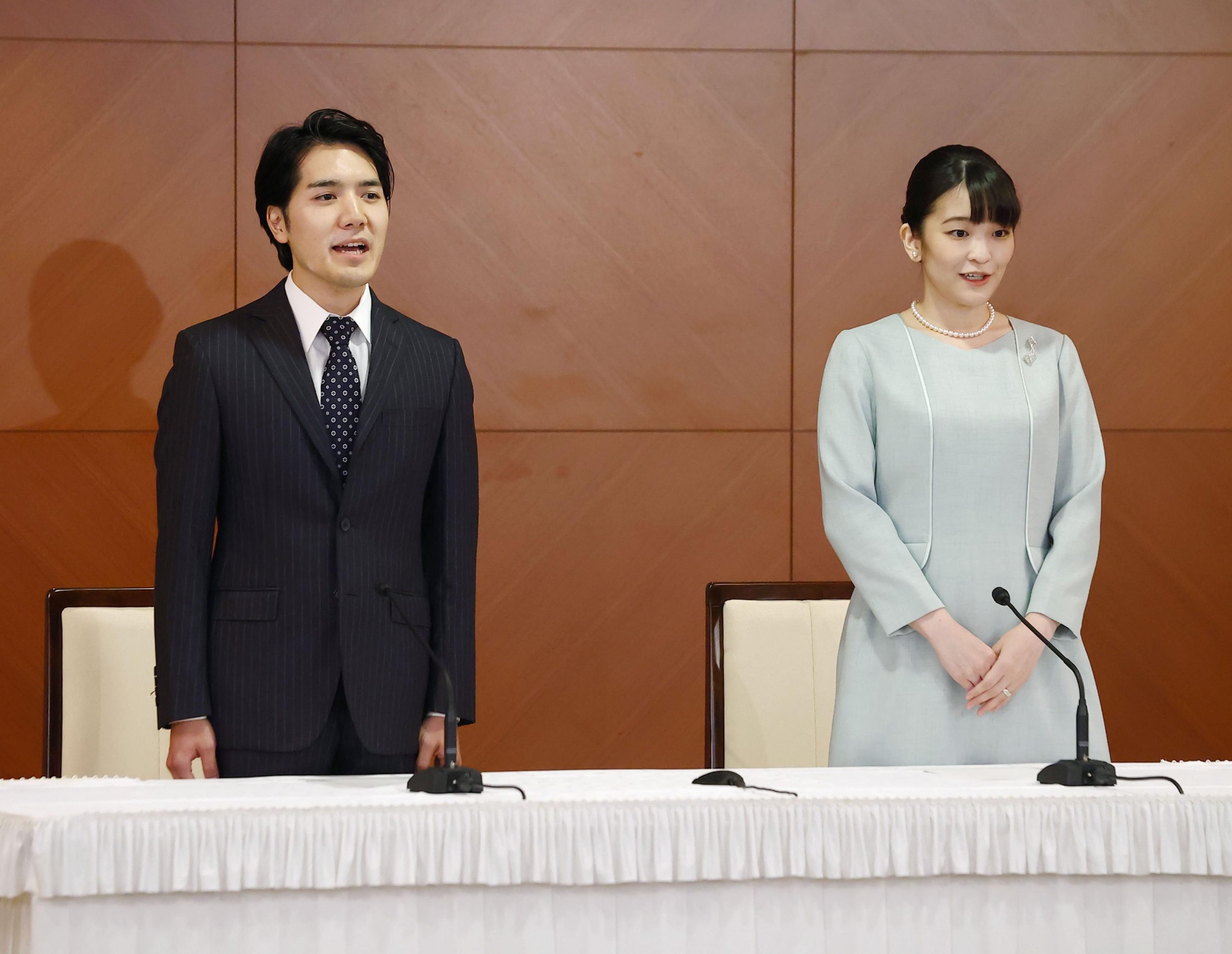 Mako and Kei Komuro hold a short press conference at a hotel in Tokyo following their wedding.

Princess Mako, who is the eldest niece of Japan’s Emperor Naruhito, turned 30 years old on Saturday, October 23. In line with the current rules of the Imperial Household of Japan, the Princess forgoes her royal status after the wedding and becomes a common member of society.

Simple and sweet, with a short press conference to communicate the news to the wider Japanese people, it was a day of transition for the now Mako and Kei Komuro.

The Wedding Behind Closed Doors

Before the wedding, Princess Mako was shown leaving her family’s household for the last time, as she prepared to begin her new life with Kei Komuro.

The step was both literal and metaphorical, as from then on Mako would still have links to her family, but she no longer will be an official part of the imperial household.

Local media filmed Princess Mako as she exchanged a few words with her parents, Crown Prince Akishino and Crown Princess Kiko. There was a heartwarming moment when Mako’s younger sister, Princess Kako, hugged her older sister to bid her farewell.

At approximately 10:30 A.M. JST, local media reported that the couple had delivered the wedding registration to be processed, formally making them husband and wife. Interestingly, from that point onward, Mako was indicated in media reports as “Mako-san” instead of “Mako-sama,” an appellation reserved to those who are officially part of the imperial family.

The couple held an afternoon press conference following the wedding, to address the citizens of Japan.

Princess Mako is well-loved in Japan, and unanswered questions looming over Mr. Komuro and his family regarding loans and finances led to reservations about the wedding among the public. The format of the press conference was mainly prepared statements read out by the couple.

The two sent out a strong message of devotion to each other, as Mako said “Kei-san is indispensable to me. And for us, [the marriage] was a necessary choice so as to listen and protect our hearts and feelings.”

Kei Komuro also echoed the warm statement, by saying: ”I love Mako san. I think that my wish is to live my life together with someone that I love.”

The two, as any young couple about to embark in a new adventure, also talked about their plans going forward, as Kei Komuro said:

Mako was just as fervent in her commitment to her husband going forward, as in the coming months they prepare to live in the U.S, where Komuro has trained to become a lawyer.

“We will be starting a new life. In our path, I am sure we will find new difficulties. But just as we have up to now, I want to continue joining forces, and walking together [with him] side by side,” she said.

The Imperial Household Agency representative then announced to the approximately 50 journalists present in the room that responses to pre-submitted questions received from the Imperial Household Association Press Club, the Japanese Magazine Publishers Association, and the Foreign Correspondents’ Club of Japan, would be returned in writing. Questions were not taken at the press conference itself.

The format of the press conference was chosen with the wellbeing of the princess in mind, as she was diagnosed with Post-Traumatic Stress Disorder (PTSD) following public criticism and concern expressed about the marriage.

Kei Komuro touched briefly on this topic, expressing his regret for the circumstances: “Over these years, wrong information was broadcast as if it were the truth, the slander which caused damage to the mind and body of Mako-san, and it is something which saddens me.”

In fact, for Mako and Kei Komuro, it had been a long road to the wedding.

Princess Mako and Komuro first voiced their resolve to get married in 2017. They reportedly met while attending the International Christian University (ICU).

The marriage between the college sweethearts was delayed by two years, following financial questions apparently related to the dispute between Komuro’s mother and her ex-fiancée. That issue has yet to be resolved.

In the press conference on October 26, Kei Komuro repeated some of the points of the statement submitted in explanation of the issue, which was published in April 2021. He also said he planned to represent his mother as her advocate going forward in the dispute.

“I have received a positive response from my mother’s former fiancé and his point of contact, a weekly magazine journalist. I would like to do everything I can to resolve this issue, and there is no change in the fact that I wish him to accept the compensation money,” said Komuro.

In 2018 and then 2020, Crown Prince Akishino spoke on the issue during press conferences on other subjects. In both cases, he said that his daughter would be allowed to make her own decision, but expressed hope that questions of concern to the public would be answered and that the people of Japan would find the marriage one to celebrate. If not, he suggested, the wedding would be allowed to take place, but without the pomp and circumstance, which would normally be given to a royal wedding in Japan.

Yet, slowly but surely, the wedding plans of Princess Mako and Kei Komuro edged forward.

Empress Emerita Michiko, who just turned 87 on October 20, had previously expressed her fondness for Princess Mako, telling the Imperial Household Agency that she would miss the Princess.

Princess Mako declared early on that she would not accept the customary lump sum payment to women of the imperial household who marry commoners and live outside the royal family of Japan.

The couple are expected to move away from the imperial palace and live in an apartment in Tokyo to start preparations for their life in New York, where Komuro trained to become a lawyer. Mako is also expected to start working.

Komuro returned to Japan on September 27 for the wedding. The soon-to-be-groom was sporting a ponytail, which attracted various reactions in Japan, but his hairstyle was a more traditional cut by the time the marriage ceremony took place.