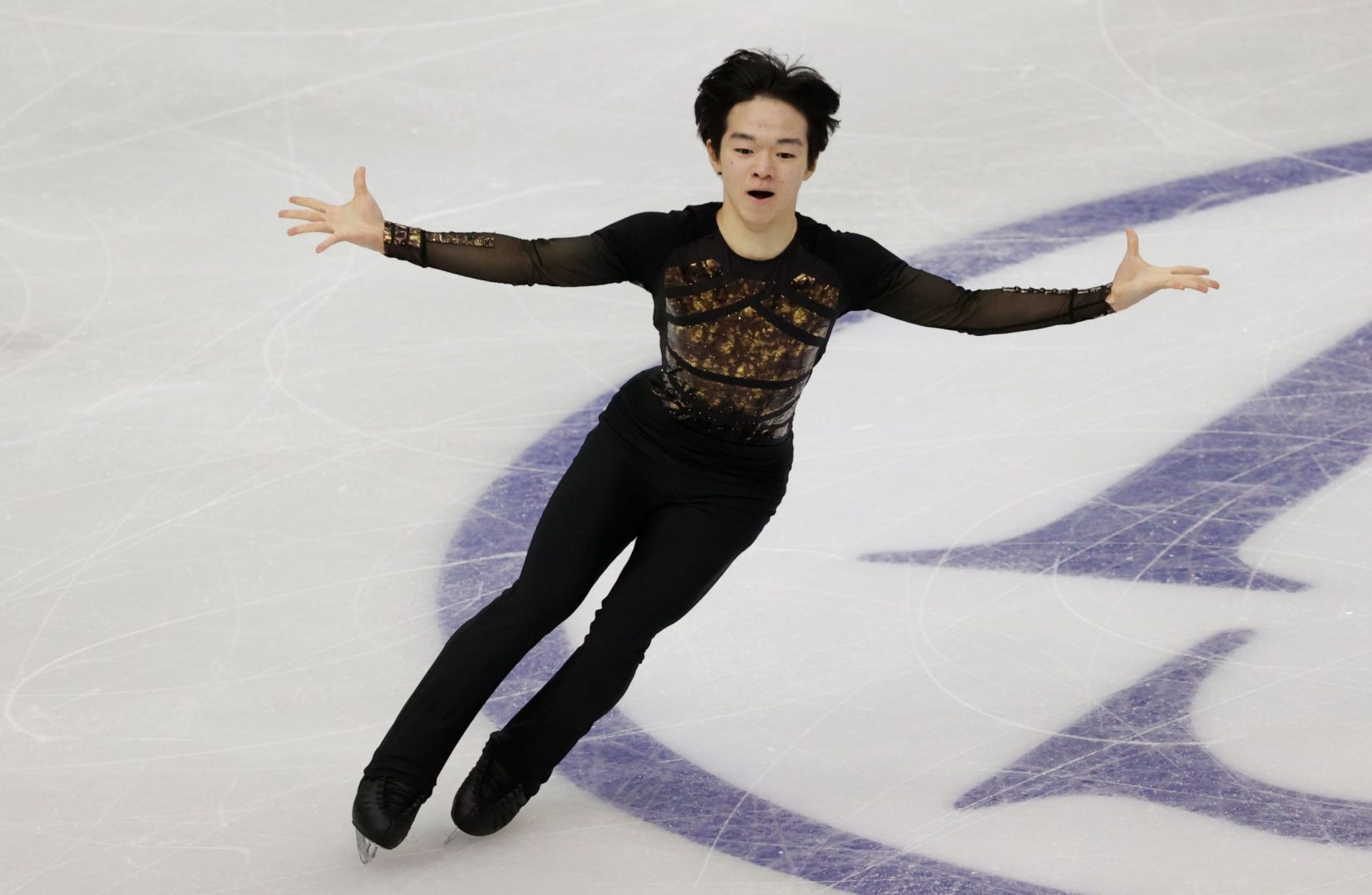 Yuma Kagiyama competes in the men's free skate at the Grand Prix of Italy on November 6. (Ciro De Luca/REUTERS)

Yuma Kagiyama’s push toward the podium at the Beijing Olympics got a big boost on Saturday, November 6 with his amazing comeback victory at the Grand Prix of Italy in Turin. The world silver medalist rallied after a poor short program on Friday, November 5 to vault from seventh place to top the podium.

In all the years Ice Time has been covering the GP circuit, he can never recall a singles skater climbing from seventh place after the short program to win a competition. The result was a testament to Kagiyama’s grit and the years of training under his father and coach Masakazu, a two-time Olympian for Japan.

Yuma and his father share a special relationship that is filled with respect, and the son’s belief in the elder Kagiyama’s advice proved pivotal in the triumph in Italy. After two-footing the landing on his opening quad salchow, then failing to complete his required combination jump in his short program to “When You’re Smiling,” the 18-year-old was understandably disappointed.

At that point it looked like the odds of last season’s world silver medalist making the podium were minimal and his chances of topping it were infinitesimal. But the senior Kagiyama encouraged his son to put the poor outing behind him and look ahead to the free skate.

“After the short program I couldn’t change my mindset and even this morning I was feeling low in practice. I didn’t know what to do about the situation,” Kagiyama was quoted as saying by the ISU website after his victory.

“My coach said let’s forget what we did last year ー the position, the record ー so I shook it off and thought I’m starting from scratch and I’m doing my best and it helped. It’s a good experience for me,” Kagiyama added.

Kagiyama took his dad’s advice and was nothing short of spectacular in his free program to music from “Gladiator” on the way to establishing a personal best score of 197.49 points and a winning total tally of 278.02.

Kagiyama landed three clean quadruple jumps and seven triples in his free skate and earned level fours for all of his spins. It was the kind of effort that has come to be expected from the normally consistent 2020 Youth Olympics gold medalist.

Following the win, Kagiyama admitted he was stunned by the reversal of fortune.

“I just found out that I finished in first place, so I’m very surprised,” Kagiyama stated, “Coming into the long program, I didn’t even think about being on the podium or getting a good score, I was just planning to do my best.”

In an exclusive interview with Ice Time last year, Misao Sato, who has coached and choreographed for Yuma over the years, provided insight into the dynamic between the skating father and son.

“Most of the communication between Masakazu Kagiyama and Yuma takes place at home,” Sato noted. “Mr. Kagiyama is a very serious man. He doesn’t favor Yuma over his other students. Probably rather the opposite. He can do that because he believes in his son.”

“Yuma basically practices on his own. During public sessions, he goes through all his elements and moves by himself,” Sato observed. “During figure skating sessions, he would go over to the boards to talk with his father only when there is something that he has trouble with or needs confirmation on.”

Sato summed up the father-son bond with clarity.

“Because Yuma has total respect for his father, he follows his father’s advice without any doubt or hesitation,” Sato declared. “Yuma’s belief in and adoration of his father and his pure love of skating allows him to tackle all the difficulties that he encounters. His strength is his ability to relax: he doesn’t have to use any unnecessary power when he does his moves.”

Kagiyama received a standing ovation from the crowd in Turin after his free skate, and earned plaudits from ISU TV announcer Simon Reed as well.

“What a delightful personality he is. What he has done with that performance has shown the likes of Nathan Chen, Yuzuru Hanyu, and Shoma Uno that he will be a contender this year,” Reed commented.

Reed’s analysis was spot on. Ice Time believes that Kagiyama will be on the podium in Beijing, the only question is in which position.

Mai Mihara notched a personal best (214.95) and came in fourth place in Turin for the second consecutive week, after finishing just off the podium at Skate Canada in Vancouver, British Columbia, the previous week. World champion Anna Shcherbakova (236.78) was the winner, with Belgium’s Loena Hendrickx (219.05) placing third.

Satoko Miyahara (209.57) was fifth as she saw her chances to be on the team for Beijing further diminish.

The final standings marked the third straight week that Japan’s women have failed to bring home a medal. Something that has been a rare occurrence in recent years.

Mihara hit seven clean triples and received level fours on her spins and step sequence in her free skate to “Fairy of the Forest” in a lovely performance that brought her a personal best mark of 144.49. She displayed the grace and confidence that took her to a fifth-place finish at the world championships in 2017.

Reed called Mihara’s skate “a faultless performance … that was special. It was fabulous to watch.”

Trusova out of NHK Trophy

Following her victory in Nevada, Russian media reported that she had competed with a fracture in her foot. However, Trusova’s agent Alexei Nikolaev described something different in an email to Ice Time on Monday.

“Sasha has an ankle injury and her doctors during the most recent check-up recommended that she skips this Grand Prix event,” Nikolaev wrote. “Time is needed for her complete recovery.”

Trusova’s pullout means she will not be eligible to skate at next month’s Grand Prix Final in Osaka.

The women’s field for the NHK Trophy was already depleted with the withdrawal of two-time national champion Rika Kihira last week due to an injury to her right ankle. Mana Kawabe, the 2019 Japan junior titleist, was added to the lineup on Monday to bring the field back to 10 skaters.

Meanwhile, Sota Yamamoto was added to the men’s roster to replace the injured Yuzuru Hanyu, who withdrew last week.