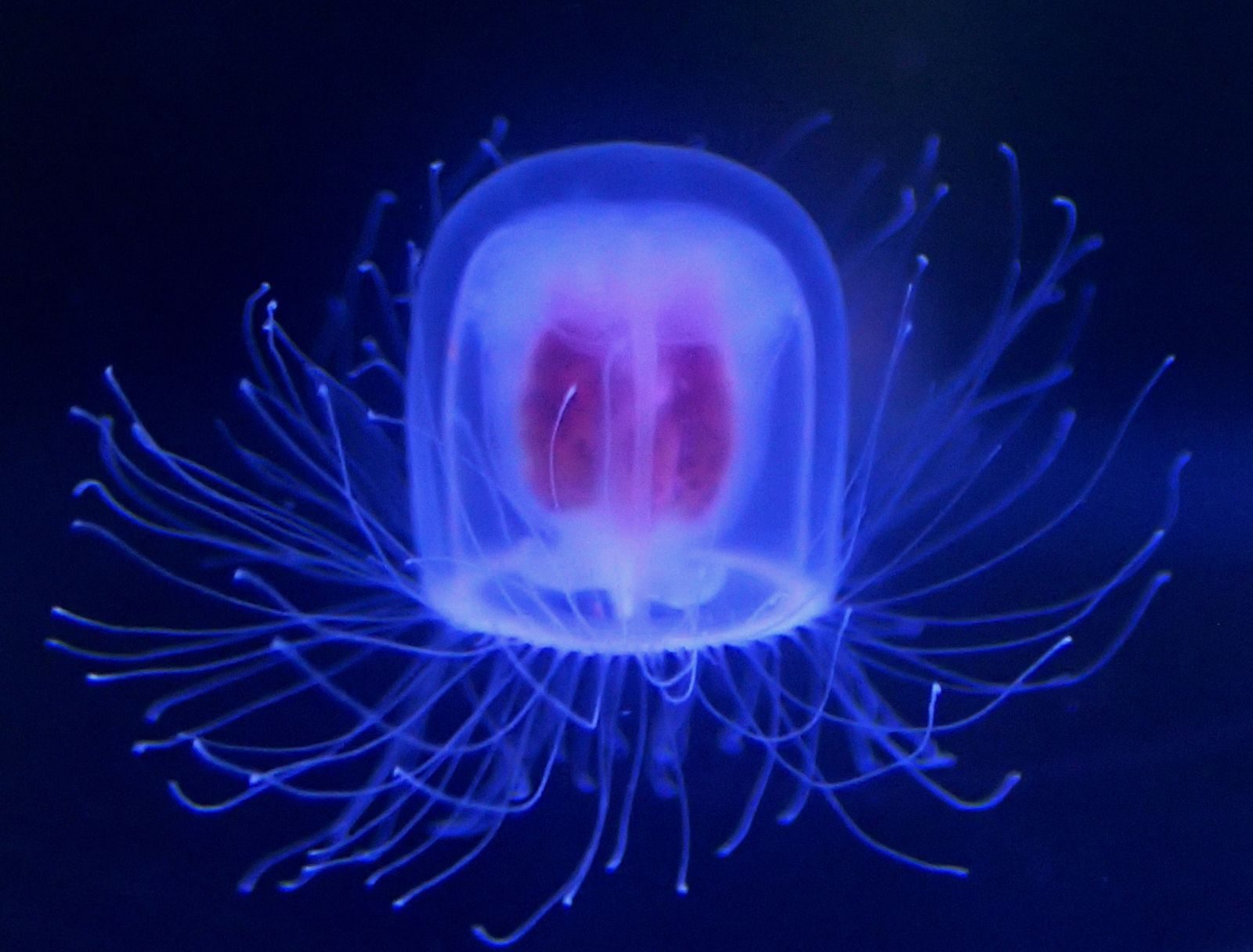 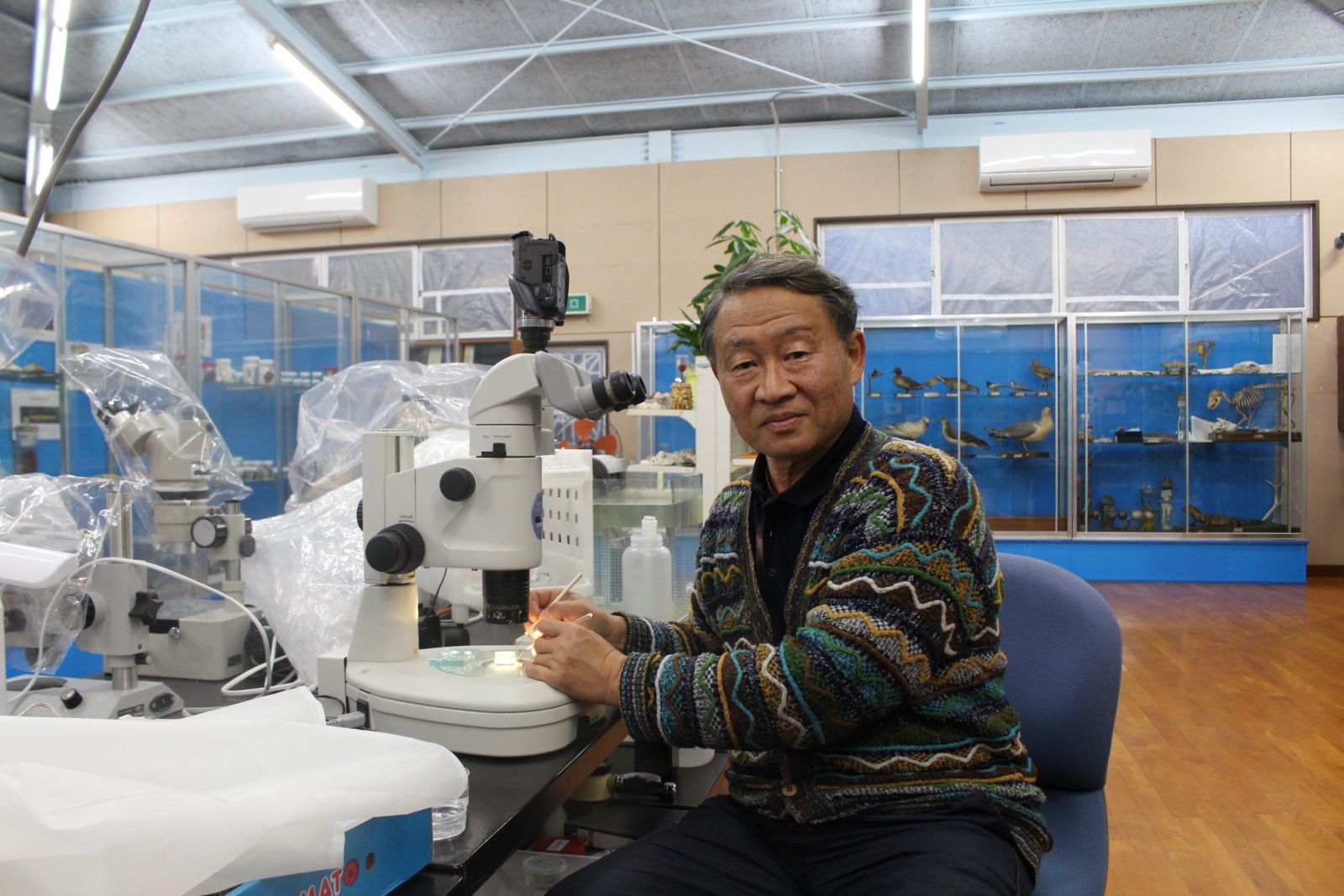 In 2018, a private jellyfish research facility opened in Shirahama, Wakayama Prefecture, near the tip of Kii Peninsula. The director of the facility is Shin Kubota, a former associate professor at the Seto Marine Biological Laboratory, Field Science Education and Research Center, of Kyoto University.

His retirement in March 2018 prompted him to open the Scarlet Jellyfish Regeneration Biology Research Institute.

Jellyfish are popular in aquariums around Japan for their soothing effect on visitors. However, the subject of Kubota’s research, the Scarlet Jellyfish (genus Turritopsis), is not your typical jellyfish. Out of 1.5 million species of animals that exist on Earth, they are among the very few creatures whose rejuvenation ability has been confirmed. The fascinating phenomenon is described as being equivalent to “a butterfly transforming back into a caterpillar” again and again.

When stimulated, the adult jellyfish of the several species of the Turritopsis genus returns to its polyp form. It attaches itself to rocks to “age backwards,” returning to the early life stages of its development. Soon, the branches of the polyp start to swell, and the swelling grows into a jellyfish again.

For jellyfish of the Turritopsis genus, it’s truly possible to start life all over again.

Europe: The Birthplace of Turritopsis Research

Study of the rejuvenation phenomenon of Turritopsis jellyfish began in Europe.

Christian Sommer, a German college student at the time, first confirmed the phenomenon in a jellyfish collected in the sea of ​​Italy.

His discovery was presented at a Spanish conference in 1991 and was also published in a marine biological laboratory bulletin, Scientia Marina, in 1992.

Further research was conducted at the University of Salento in Italy by Dr. Piraino and Dr. Boero of Italy, and Dr. Schmid of Switzerland. In 1996, the trio published a joint research paper on their work in the university’s Biological Bulletin.

Kubota successfully achieved the rejuvenation of a variety of Turritopsis while he was a visiting researcher at the University of Salento from 1999 to 2000. When he raised young jellyfish in unfiltered seawater, rejuvenation occurred spontaneously. It is thought that the dirt inside the seawater stimulated the creature and triggered rejuvenation.

Kubota Paves the Way in Japan

Various jellyfish species of the genus Turritopsis inhabit all seas of the world, except the polar regions.

In September 2000, a joint research project by Kubota and the Kagoshima Aquarium examined jellyfish in Kagoshima Bay and confirmed that the type of Turritopsis jellyfish found there also have the capability to rejuvenate.

In research over the two years, from May 2009 to March 2011, Kubota successfully triggered rejuvenation 10 times in one individual Turritopsis of Okinawa origin. It is thought that the stress of overcrowding provided the trigger in that case.

The record has now been broken with 14 rejuvenations triggered in one individual jellyfish. This was made possible using a unique method developed by Kubota, which involves piercing the jellyfish’s body with a needle.

Kubota’s method started with the collection of samples using a plankton net. He describes finding many tiny crustaceans stuck in the jellyfish’s body in the net, which prompted him to take action: “By removing the crustaceans from the jellyfish and raising them, I managed to rejuvenate Turritopsis jellyfish in Kagoshima, which was the first ever case in Japan.”

The needle method of inducing regeneration was developed from that experience.

The Key Lies at the Base of the Tentacles

Because of its strong regeneration power, if scratched lightly, the Turritopsis jellyfish can restore itself to its original form without fully regenerating.

Regeneration is triggered and the jellyfish takes the next step, however, when it receives serious or fatal injuries or is under immense stress.

Turritopsis jellyfish that undergo regeneration first turn themselves into round “dumplings.” From these dumpling forms, root-like appendages grow to become polyps. The “buds” that grow from these polyps eventually break free and grow into jellyfish again.

There is a secret to successful use of the needle method to prompt regeneration. Turritopsis jellyfish have numerous tentacles on the rim of their umbrella-shaped bell, and there are small bumps at the base of its tentacles.

According to Kubota, “You need to pierce the tentacle bumps. No matter how hard you try by piercing other areas, it will not produce the same effect.”

It would seem that once the mystery of the technique is revealed, anyone could achieve regeneration. But it doesn’t work that way.

That is because the jellyfish themselves are so minuscule. The bell of Turritopsis jellyfish found in Shirahama’s Tanabe Bay are only 3 millimeters in diameter.

Even the largest Turritopsis species, found in Hokkaido, is merely one centimeter. Therefore, the needle method of inducing regeneration must be performed under a stereoscopic microscope.

The Japanese name of Turritopsis — Benikurage — is derived from the scarlet color (beni) of the gastrovascular cavity enclosed in the bell of the Turritopsis jellyfish found in the cold waters in the north part of Japan.

Kubota says he dreams of the day when “rejuvenation medicine” can be developed from Turritopsis. It is a strange coincidence that a grave in Wakayama is said to belong to Xu Fu, who was dispatched to the region by the Chinese Emperor Qin Shi Huang (B.C. 259~210) with orders to find the drug of immortality.

Multilateral efforts to decipher the rejuvenation phenomenon of Turritopsis jellyfish at the genetic level also have been initiated by several collaborating research scientists.