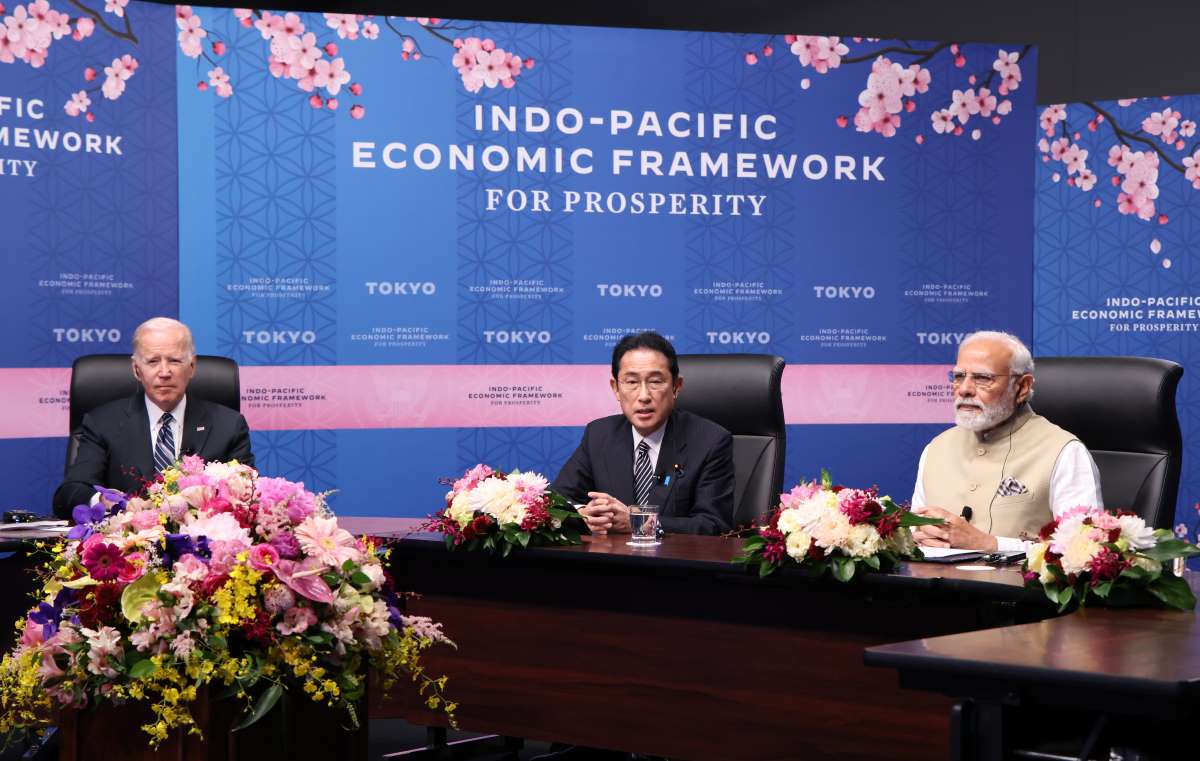 Prime Minister Fumio Kishida speaks at the announcement of the Indo-Pacific Economic Framework (IPEF in Tokyo on May 23, 2022), with. US President Joe Biden and Prime Minister Modi of India (Photo by Ryosuke Kawaguchi)

During his visit to Tokyo for the Quad Summit, Prime Minister Narendra Modi signed on to the Indo-Pacific Economic Framework —a new trade pact which brings together the United States and a dozen initial partners, including Australia, Brunei, India, Indonesia, Japan, Republic of Korea, Malaysia, New Zealand, the Philippines, Singapore, Thailand, and Vietnam.

US President Joe Biden first mentioned the idea of the IPEF on the sidelines of the 2021 East Asia Summit.

So, why is India’s signing on to the IPEF important?

First, New Delhi wants to show that it is relevant to the trading process in the Indo-Pacific region. India has not signed on to the Regional Comprehensive Economic Partnership (RCEP). A free trade agreement, it includes the Association of Southeast Asian Nations, along with Japan, South Korea and China.

Nor is it a part of the Comprehensive and Progressive Agreement for Trans-Pacific Partnership (CPTPP) which is a free trade agreement between Australia, Brunei, Darussalam, Canada, Chile, Japan, Malaysia, Mexico, Peru, New Zealand, Singapore and Vietnam. It was signed by these nations in 2018, in Santiago, Chile.

Second, the IPEF is important since New Delhi has been under pressure to show that it can look beyond its ties with Russia on the Ukraine issue. It would be safe to say that, in contrast to the majority of public opinion across the world, India has refrained from overtly criticizing Russia.

Third, the American-initiated agreement has geopolitical ramifications. With the second biggest population in the world, India represents a huge market which no one can ignore.

Moreover, India stands to benefit. Even though the former US President Donald Trump has left office, there is still a huge constituency in the United States, even among the Democrats, who don’t want to see the sanctions lifted that were imposed on China by the previous American administration.

First, when the RCEP deal came up for signature, domestic considerations led India to pull out at the last moment. Circumstances behind its decision have changed little since then. However, the Modi government has launched a “Make-in-India” initiative. Part of the initiative is the government’s effort to push the production of as many items as possible within the country, instead of relying on imports.

Second, India recognizes that the IPEF does not provide an easy way out on the economic front. New Delhi will have to pay close attention to its economic interests in the Indo-Pacific, in spite of joining IPEF.

At a recent conclave in Guwahati in Northeast India, Dr S Jaishankar, the External Affairs Minister of India, noted that “on a commercial scale, a world all the way to Vietnam and Philippines, from Haiphong to Hazira, and from Manila to Mundra will open up, creating an east-west lateral with sweeping consequences for the continent. It will not only build on the partnerships that we have with the ASEAN and Japan, but would actually make a difference to the Indo-Pacific Economic Framework that is now in the making.”

The fact that this deal happened while the Indian prime minister was in Tokyo clearly shows Japan’s critical role in regional trade arrangements. After all, it was Japan that chaperoned the launch of the CPTPP, after the United States withdrew from the TPP.

It should also be noted that the word “Indo-Pacific” is in the name itself: the Indo-Pacific Economic Framework. This gels well with Japan’s Free and Open Indo-Pacific vision, which was first outlined by former Japanese Prime Minister Shinzo Abe.

The Quad countries have all joined on to the IPEF bandwagaon. The presence of a rules-based trading order in the region is important, particularly given the state of the economy of nations like Sri Lanka, which have seen a meltdown of late.

While China had stolen a march over the US and other countries in the field of infrastructure with its signature Belt and Road Initiative, many countries which had signed on to the BRI have not had a good experience and are now swamped under a huge burden of Chinese loans.

The Indian economy has been hit by crosswinds and the government would do well to engage proactively with the economies of the Indo-Pacific. And this is precisely what the IPEF offers India.

The IPEF also goes to show that the US is trying to regain credibility in the region. While many critics argue that it is only a framework and not a “trade deal”,  for India it provides a good chance to participate in the framing of the ground rules for an equitable trade regime for the region.

IPEF is structured around four pillars:

The Connected Economy would be an area of interest for India since the digital economy is set to create close to 65 million new jobs in the country by 2025. However, another IPEF pillar, Clean Economy, could put some pressure on India as it is a developing economy, it has been keen to avoid binding emission cuts.  Hence, while India is “in” the IPEF, it will need to proceed with an abundance of caution.