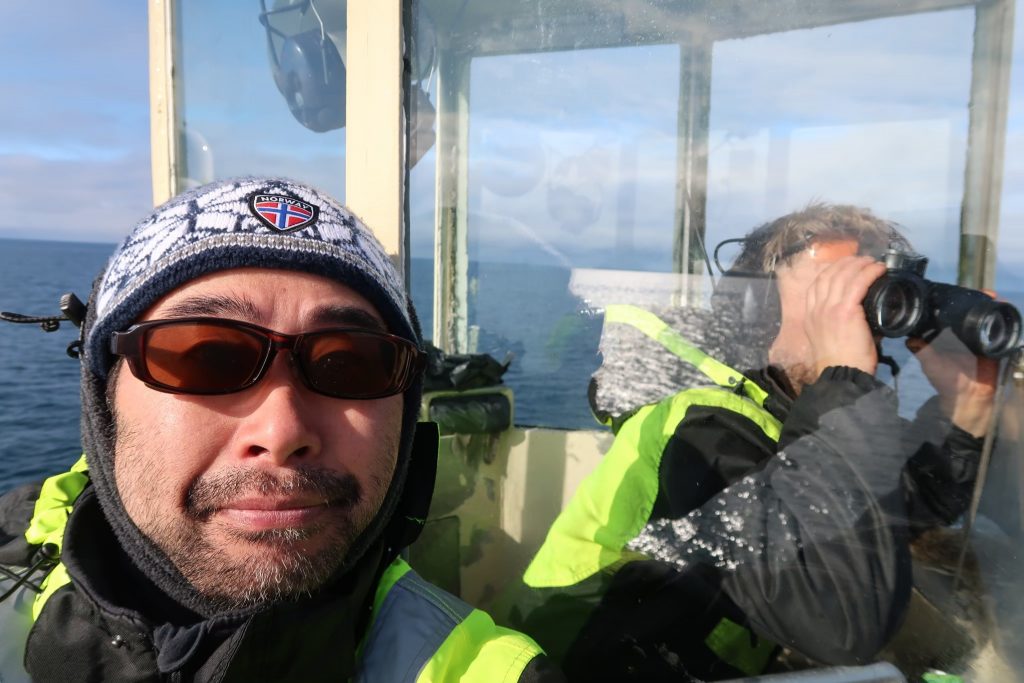 Hirohiko Shimizu on a whaling ship in the Arctic.

Japan resumed commercial whaling in 2019, and Japanese news has been filled with reports on the topic. But even with the sudden increase in information from opportunities to watch and read and about whaling, most people still don’t know the basics of the industry.

Where are whales caught? How does the meat end up on dinner plates across the country?

Hirohiko Shimizu, one of Japan’s prominent whale meat salesmen and promoters, knows more than most. He’s the president of Myklebust Japan, a subsidiary of Norway’s largest whaling company, Myklebust Hvalprodukter. Yet even he admits that in his college days he knew nothing at all about whaling.

In an interview, we talked to him about how he became so passionate about the subject, what caused him to devote himself to whaling issues, and what he’s learned during his journey.

You studied in the Faculty of Fisheries at Kagoshima University, but did you have a passion for whales when you were young?

No, not at all. In my younger days I loved raising goldfish. I got really excited about cross-breeding different species to see what kind of offspring they would produce.

I was born in Nagoya, and there was a town there called Yatomi, which was a major center for goldfish. There were many goldfish shops near where I lived. My house was in a rural area, so it was surrounded by rice paddies, which were filled with all kinds of bugs. I would gather them and feed them to my goldfish.

This was something I really enjoyed, so I decided to enter the faculty of fisheries in university. My first choice, Hokkaido University, was a bit too difficult, so I decided that if I couldn’t go up north, I’d go south, and chose Kagoshima University. Really, I just wanted to get out of Nagoya and live on my own, but Tokyo seemed so expensive that I decided to head to a school out in the countryside (laughs).

Raising goldfish by hand is a unique path to studying fisheries! Did you take an interest in whaling once you started university?

I was in my fourth year when I decided I wanted to know more about whales. I was an exchange student at Pukyong University in South Korea during my second year, and at the University of Georgia in the United States during my fourth year.

When I was at the University of Georgia, my classmates and roommates would ask me things like, “Why does Japan hunt whales?” and “Don’t you think that’s cruel?” — and that’s what triggered my interest.

Americans have a habit of speaking very directly, and when individuals I considered to be friends suddenly confronted me so directly, it was a shock. It really made me wonder, “Why are they blaming me for this?”

How did you respond to your American friends?

Actually, I had never thought about whales, so I had no particular opinion about whaling. So the first thing I did was research about Japanese whaling, even while I was still in the U.S.

(You can read the rest of the article at this link. This article was first published by Whaling Today on September 10 2021. Check out Whaling Today for deeper and unique insights into Japanese whaling culture, whale conservation efforts and sustainable whaling.)