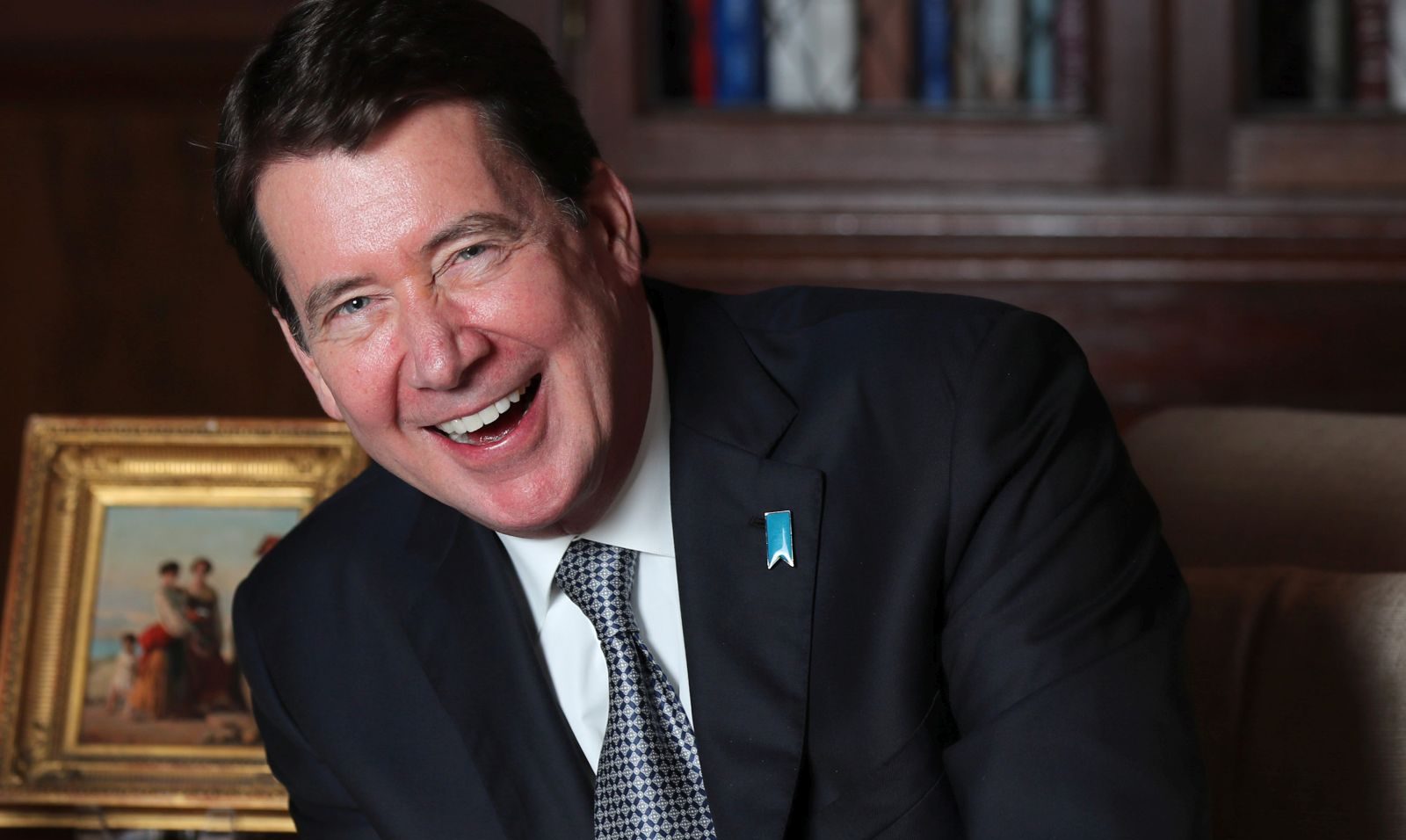 Ahead of the upcoming presidential election in the United States, our correspondent in Washington reached out to former Ambassador to Japan William Hagerty in a telephone interview on October 26 to learn more about bilateral trade and economic ties under the Trump administration and the future of Japan-U.S. relations.

“My goal is to continue to be a bridge between Japan and the United States,” Hagerty, now a candidate for the U.S. Senate in his home state of Tennessee, told The Sankei Shimbun and JAPAN Forward.

Focusing on energy resources, the former ambassador said that expanding energy imports from the U.S. would help Japan, a resource-poor country, ensure stable supplies in the face of increasing geopolitical threats, such as those from China and Russia.

Turning to regional security in Northeast Asia, he said, “We need to cooperate, the United States and Japan, to have the strongest force in the region” to counter China. He pointed out, “The Trump administration has made a large investment in rebuilding the U.S. military, which was weakened by the former Obama administration.” He also said America was “relying on the support of all allies” to share the burden of expenses for stationing U.S. military overseas, including in Japan.

Enthusiastically pointing to the U.S.-Japan trade agreement, which came into effect this year, he added, “The ties between the U.S. and Japanese economies have strengthened,” and expressed his hope that Japanese companies would increase their investment in Tennessee and other states.

Last night Tennessee hosted the second debate in the contest for president. How did you see the debate as a Tennessean?

I greeted the President when he arrived here in Tennessee and attended the debate with him. And I felt like he did a very solid job of drawing the contrast that the American people need to see — the contrast between a strong economy that he was able to build, and actually a very weak economic recovery that we saw under the Obama-Biden administration.

With respect to national security and defense, the President was able to talk about China and the huge difference that the American public can expect. President [Donald] Trump wants to stand up to China to hold them accountable and to push back when China breaks the rules. He highlighted the fact that Joe Biden is compromised by China. His son, his family, has deep economic ties to China, to Russia, to Iran. That creates a vulnerability for Joe Biden that should concern every American.

He also was able to talk about energy, energy independence. And people in Japan understand this very well: you don’t want to be reliant on countries that don’t have your best interests at heart.

My goal is to continue to build the bridge between the United States and Japan on energy, or more exports from the United States to Japan. We have such a strong security relationship, and energy should be an important component of that.

Joe Biden was great. He wants to kill the fossil fuel industry, move toward wind and solar, which are primarily industries dominated by China right now. But President Trump made it clear that we’ve been able to bring our carbon emissions down. At a time when the other members of the Paris accord had not met their obligations, the United States has actually performed better than the other major economies in terms of climate.

What are your thoughts on the Senate race? If you win, what are your priorities moving forward?

I’m confident that Tennessee values are conservative values. What I want to see is a strong economy, a strong national security. I want to see efforts toward peace around the world. I applaud the efforts that the President has made in the Mideast with the historic treaties between Israel, the UAE, and Bahrain. The progress that we’ve made in Sudan, all of these are critically important in terms of our foreign policy.

I want to see stronger alliances with our partners like Japan. I am grateful for the opportunity] as the United States Ambassador to Japan, our strongest ally in the Asia Pacific, if not the world.

The new Suga administration recently reiterated its commitment to the Japan-U.S. relationship. How do you see the prospects for future relations in general?

I had the great privilege of working closely with then-Chief Cabinet Secretary Suga when I served as ambassador to Japan, and I hold him in the highest regard. His becoming prime minister is only going to further strengthen U.S.-Japan relations.

The two countries have recently begun working-level negotiations on a cost-sharing agreement for hosting American troops. What is your expectation?

Our partnership is and should continue to be the strongest in the world. And as the threats mount in the region, whether it be from North Korea or Russia, and most importantly, China, I think that we need to continue to work as closely together as possible.

We have more military stationed in Japan than any place else in the world. That underscores the significance of the relationship for us. And I want to see that relationship to continue to deepen and strengthen.

We have to keep a focus on China and the fact that China has increased its military budget by seven-fold over the past couple of decades. We need to keep our focus on the threat that China presents, on the threat North Korea presents. And, frankly, we cannot forget Russia.

Nissan, Bridgestone, and other Japanese companies have invested in Tennessee. Are you optimistic the state will continue to attract future investment from Japan?

Yes, as you know, I served as the Commerce Secretary for Tennessee. When I came into that position, Tennessee’s unemployment rate was higher than the national average. We were in the bottom half. I restructured our organization and reached out to build our relationship with Japan. We made Tennessee the number one state for creating jobs through foreign investment by the time I left four years later.

The U.S.-Japan trade deal is going to bring Tennessee farmers closer to Japan as well, because that’s going to open the market for more agricultural sales to Japan. And I think that you will see a much greater linkage between the United States and Japan in the agricultural area, just as you’re going to see it in the manufacturing arena.

The trade deal is basically regarded as “Phase One.” Now both countries are supposed to move forward to “Phase Two.” What do you think will be the priority for those negotiations?

The general concept of “manufacturing in America what you sell in America” makes a great deal of sense. You take currency risk out of the equation. You make logistics much easier. It is also a way to get much closer to your customer, to make sure that the manufacturing process and the innovation and the design are responsive to market needs.

The United States is the largest market in the world. And I think that we should see more direct investment in the United States because it makes good business sense. And my goal, if I’m fortunate to be elected United States senator, is to continue to make America the most attractive place in the world to invest capital.

What is your view on opening up the American side in terms of automobiles?

Tennessee has a very strong workforce, and a great business climate. So, as Japan thinks about growth opportunities and the low risk, low cost place to do business, America, and Tennessee in particular, will be the first choice.