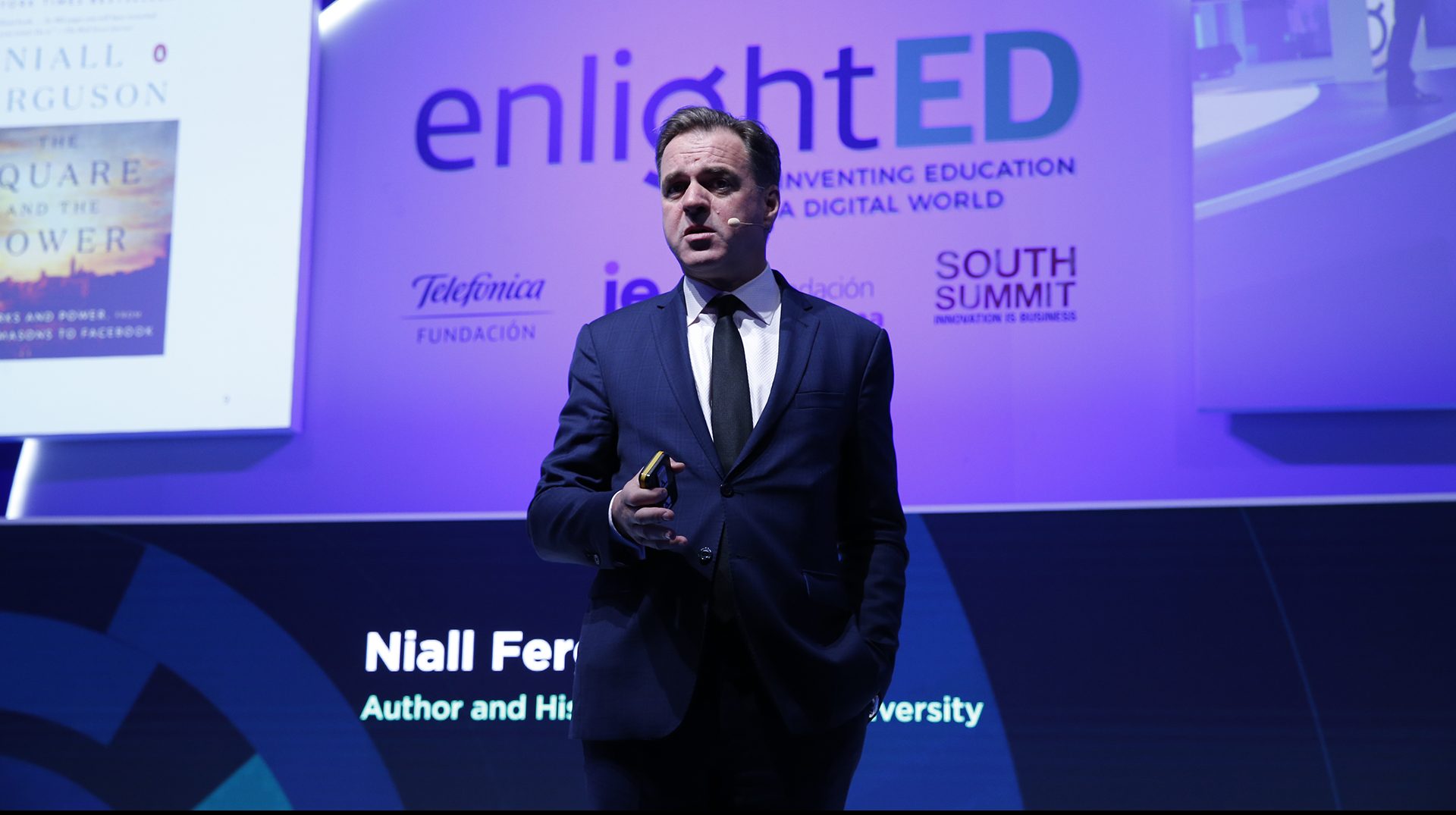 For people in the field of social sciences, the Scottish historian Niall Ferguson is a familiar name. Known for his global perspective on modern history, the Milbank Family Senior Fellow at Stanford University’s Hoover Institution was recently in Madrid for IE University’s enlightED conference on technology and education. We caught up with him after his keynote speech the power of technology in today’s world. Ferguson sat down with JAPAN Forward to discuss Japan in the era of the Shinzo Abe administration and the geopolitical tensions among Japan, South Korea and China.

He discusses Japan’s political comity and international relations in the interview excerpts below.

In April 2019 as you were visiting Japan, you wrote an article reflecting on the bleak Brexit situation in the UK. What pushed you to write this article?

I think anybody who visits Japan, and revisits after a time away, is struck by the stability – not just of the society, but of the politics. Abe has done something that looks miraculous from the vantage point of most European democracies. He has established a real continuity of strategy, he’s maintained a solid electoral base for it, and he’s done a lot to restore Japan’s self-confidence.

So I was naturally bound to draw comparisons with Britain, which is another bunch of islands off the Eurasian coast, and which is hardly an advertisement for political stability.

My question was: why? England in Japan have a lot in common historically. And yet, somehow Japan seems to be running this constitutional monarchy pretty much as designed, whereas Britain is in a constitutional crisis that has been triggered by Brexit, but I don’t think it’s entirely about Brexit.

When Abe will eventually exit the political scene, do you think this will lead to instability?

I’d be surprised if Japan became unstable, because what’s very striking to the visitor is the sense of social cohesion that Japan has.

Now, you could say that it’s because Japan has had far less immigration than the UK or European countries and so it has a kind of homogeneity. But that’s changed a bit, and of course there are significantly more foreigners working in Japan than there were 20 years. It’s still a strikingly homogenous society by European or American standards, but I think that would be too simplistic an explanation.

Japan’s institutions are working in a way that is impressively stable. There isn’t a section of society that is deeply alienated from the system. Abe has managed to bring nationalism back in from the cold if you like, and this of course is causing trouble in the South Korean situation, but it seems to be an important part of his appeal.

So you have a kind of conservatism that is broad based and that doesn’t really have any of the populist elements that have crept into Europe and North America and elsewhere. Think of Brazil.

That is quite a trick to have pulled off. And of course as an outsider and a rare visitor I am in no position to really explain this, but I talk to people who live there or who have lived there for a long time. There is a kind of institutional stability that will certainly outlast Abe and will be the basis for whoever emerges as his successor.

What about the Japanese economy and its aging population?

You know if you think back a few years, there were constant worries that Japan’s economy was going to be permanently in a deflationary trap, that the economy had spiraled out of control and at some point there will be some terrible reckoning. That became the great widowmaker on Wall Street, because it never happened.

I regard Japan as a sort of experimental laboratory for the economics and politics of an aging society. You end up in this debt which is mostly domestically held, the interest rate is vanishingly small, and it’s stable. That seems really odd to someone based in the U.S., or indeed in Britain. But it seems to work, and it may be the future for some European societies with similar demographics.

Today I was talking to some business people here [at the enlightED conference in Madrid,] and I was saying, “Germany seems to want to be Japan” in terms of its demographics, in terms of its economic growth rate. Also, Japan despite the aging population is still quite an innovative place, and that is something that people forget.

What is your sense of Japan’s economic future?

With robotics, you’ve got some really cutting edge research coming out of Japan.

I am also struck by the sophistication of Japanese thinking about geopolitics.

In all the turmoil that has been created by President Trump, there seems to me to be a game plan in Tokyo, which is somewhat more coherent than what one hears elsewhere, for how you create a new architecture for the digital economy which takes proper account of the differences between China and developed economies of the G7.

I think the WTO kind of failed to do that. And when I was in Tokyo last, the discussion was, “How do you come up with a new WTO for the digital age?”. That is the right question to ask, and I hear it being asked in Tokyo.

Moving to geopolitics and the rising tensions between South Korea and Japan, how do you predict the situation is going to resolve?

I was in Seoul last week, and I said to the South-Korean journalist that interviewed me that, in the end in the great scheme of things, this [escalating tension] seems like a backward looking cause for friction at a time when unity with respect to China would be preferable.

Though it’s not for me to take sides in this dispute, in the geopolitical grand scheme of things, it would be highly desirable that the U.S. allies in the Asia Pacific region stuck together and focused on the big game, which is really China. China’s challenge is not just to the U.S.. It’s a global challenge that has serious ramifications for both Japan and Korea. So for me, [the bilateral tension] is all kind of a distraction from the future issues that must be more important.

I’m a historian, but there are times when history is actually best – not forgotten, but just put into the appropriate shelf in the library so that societies can move on.

The other major actor in Japan’s geopolitical sphere is China. What should Japan do, especially given the recent developments in Hong Kong?

I think on Hong Kong there is nothing that Japan can do other than what the U.S. is doing – to express concern and sympathy with the elements in Hong Kong that are legitimately opposing subordination of Hong Kong’s legal order to the mainland. That is not to endorse everything that the protesters have done, but I think this whole thing [protests] began with valid reasons.

More broadly, I think Japan has a very key role to play here in using Shinzo Abe’s influence with Trump to persuade him that he cannot take on China alone. He has to do it in partnership with America’s allies, it can’t simply be blunt instruments like tariffs. There needs to be some more sophisticated strategy.

If you start imposing tariffs on your allies as well as on China, the whole thing stops being strategically coherent.

I do think that Abe has influence there. He and his advisors, I think, have a rather more sophisticated view on how you contain China than maybe President Trump has. I think that is really where the Abe-Trump relationship matters, because it [the relationship] seems to be a serious one. He seems to have Trump’s ear.

Niall Ferguson is a Scottish historian known for his global perspective on modern history. He is the Milbank Family Senior Fellow at Stanford University’s Hoover Institution and a senior fellow of the Center for European Studies, Harvard. He is also a visiting professor at Tsinghua University in Beijing, China, and the Diller von Furstenburg Family Foundation Visiting Scholar at the John Hopkins University Nitze School of Advanced International Studies (SAIS) in Washington, DC.

Professor Ferguson is the author of fourteen books, with particular focus on modern history and economics in Europe. His first book, Paper and Iron: Hamburg Business and German Politics in the Era of Inflation 1897-1927 (Cambridge University Press, 1995), was short-listed for the History Today Book of the Year award. His PBS series, “The Ascent of Money,” gained him the International Emmy for Best Documentary series. Through his writings he has made global comparisons, including with Japan, for example in his work The War of the World (Penguin Press, 2006) and Civilizations: The West and the Rest (Allen Lane, 2011).

Other JAPAN Forward Articles Related to the enlightED conference on technology and education held at IE University in Madrid: