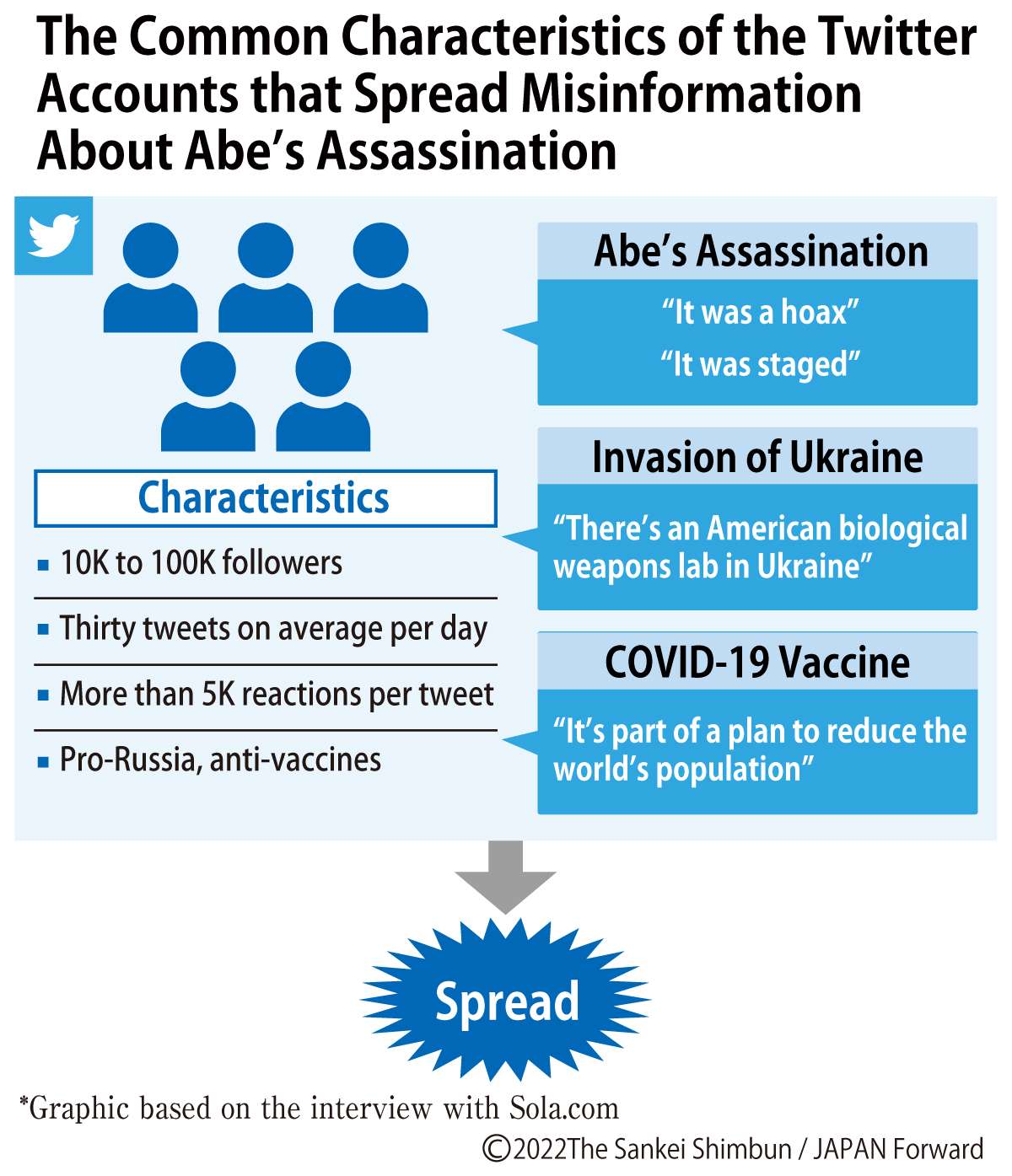 Looking into some of the Japanese Twitter accounts that were crucial in spreading misinformation about the assassination of former Prime Minister Shinzo Abe, it was learned in August that some of the same accounts actively spread other conspiracy theories in the past.

Is it a coincidence that the accounts that spread rumors saying the Abe assassination was a "fake" were previously linked to Russian propaganda about the invasion of Ukraine and COVID-19 theories against vaccines?


Never Tweeted About Abe Before

A Sendai-based internet security company, Sola.com, analyzed tweets posted in Japan regarding the Abe assassination from July 8, when Mr. Abe was gunned down, to July 11. Among other things, they followed the spread of tweets saying “The incident was staged” or “It was a hoax.”

Sampling accounts that were instrumental in spreading misinformation, the company focused on five accounts that had from 10,000 to 100,000 followers. These same companies gathered over five thousand likes and retweets of their posts about the Abe assassination, demonstrating strong influence.

Past tweets from those five accounts were also verified and analyzed. Sola.com found that the same five had also pushed Russian propaganda regarding the invasion of Ukraine. Starting in February, for example, they started false rumors on matters such as the existence of a US biological weapons lab inside Ukraine and that Ukrainians are neo-Nazis.

Going back further, Sola.com found the same accounts had pushed the false line that the COVID-19 vaccine was part of a plan to reduce the world’s population.

They were also connected to other groups retweeting each other, all of which shared the same characteristics of being pro-Russia and anti-vaccine.

“There were several suspicious details," said a representative of the security company. "For example, the contents of the tweets were unusual for Japan, and they were posted at times matching St Petersburg (Russia) business hours.”

The representative added that there is a possibility that foreign hands may be involved in spreading conspiracy theories about Mr Abe’s assassination.

The 'Rescuer Was an Actress' Ruse

Distortion of facts using doctored videos and photos has become a typical technique of those spreading fake news in recent years.

In the Abe assassination, two photos spread on social media alongside this phrase immediately after the incident. One showed the woman who provided first aid to Mr Abe on the scene. The other pictured a female journalist working abroad for a major television channel.

These posts compared the physical appearances of the two women, claiming that they were the same person and alleging she was an actress hired by the government.

“The incident was staged,” said some of the suspicious posts. Others said, “It’s a farce.”

However, the TV channel responded to a Sankei Shimbun inquiry, stating that in fact the journalist was not in Nara, where the assassination took place. Therefore, it seems, someone was trying to instigate more rumors among internet users while knowing they were spreading false information.

This is not the first such claim. In March 2022 it ws reported that three people were killed ー including children ー and seventeen were wounded in Russian bombing of a hospital in Mariupolis, the site of a bloody battle in Eastern Ukraine.

Images of a pregnant woman running away from the hospital were featured in media reports worldwide. Russia, however, insisted that the woman was just an actress and she was not pregnant. But when Ukraine’s UN ambassador raised the photo of the woman and her newborn child in front of the United Nations Security Council, it became apparent that Russia’s claims were false.

Since the start of the pandemic, opportunities to use the internet have increased. At the same time, social media has become flooded with information spreading conspiracy theories. Aside from the pro-Russia propaganda dubbed "The Truth about Ukraine," the misinformation regarding the COVID-19 vaccine in particular stands out.

The Sankei Shimbun asked Associate Professor Shinichi Yamaguchi of the International University of Japan about the phenomenon. Yamagucni, an expert in online libel, says that "the human desire to feel a sense of superiority" is intimately linked to the spread of misinformation. Getting involved with and spreading baseless information makes people feel as if they know some hidden truth other people are unaware of, he argues.

“Vaccines are easy material for conspiracy theories,” says Professor Yamaguchi. While many citizens are asked to get inoculated, you cannot see the vaccines’ effects immediately. And “Unclear events that cannot be fully understood without technical knowledge leave plenty of room to the imagination.”

Their structure is very similar to that of the conspiracy theory that spread after the 2001 terrorist attacks in the United States, which propagated the theory that President George W Bush orchestrated the attacks, he says as an example.

People tend to only look at information corroborating their ideologies or what they want to believe, explains Professor Yamaguchi. There is also the concern that this eventually influences people’s finances, as they may be persuaded to join seminars based on misinformation or to purchase expensive items.

Among those, he says, we can assume there are extreme examples that use wrong information to stir anti-patriotic feelings.

As technological innovation advances, new threats have emerged, such as “deep fakes,” which are videos altered using artificial intelligence. On the other hand, there have been confirmed cases of the systematic spread of false rumors overseas for commercial purposes.

What Professor Yamaguchi is most concerned about is the occurrence of fractures in society due to conspiracy theories. The propagation of rumors in such a world portends a time when contrasting powers would be unable to confront each other through dialogue. If that happens, Yamaguchi says, it would be a "crisis for democracy."