Part 1: 3 Ways the US, Japan, Should Handle China’s Island Building

As China continues with its policy of expansionism in the region, combining military intimidation and economic inducements toward its neighbors, we publish in 3 parts an instructive interview by the Sankei Shimbun’s Washington bureau chief, Yoshinari Kurose, with Dr. Toshi Yoshihara. 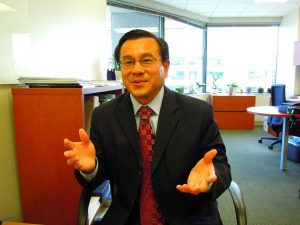 Why do you think the previous administration, Obama administration, was so soft on this issue with China concerning the South China Sea and the FONOPs (Freedom of Navigation Operations)?

Several interrelated assumptions underpinned this reluctance to confront China more forcefully.  It should be noted that these assumptions informed Obama’s predecessors as well.  First, the United States assumed that engagement could coax China into becoming a responsible stakeholder.  Second, Washington was convinced that it needed China’s cooperation on a host of global challenges, ranging from climate change to nonproliferation to North Korea.  Not surprisingly, preserving stable Sino-U.S. relations was the prime directive while confrontation with China was anathema.

Geopolitical developments also reinforced risk aversion.  The pivot to Asia was premised on the dual assumptions that we could withdraw from the Middle East and that Europe was more or less a zone of peace. Yet, events intervened and overturned those assumptions. The rise of ISIS, Russian aggression, and Chinese assertiveness meant that the United States found itself confronted with challenges on the eastern, southern, and western rimlands of Eurasia virtually simultaneously.

Thus, the plan to devote a larger proportion of U.S. military forces to the Indo-Pacific region came under severe strain.  In other words, the opportunity costs of diverting forces from Europe and Middle East to the Asian theater rose sharply as the global security environment deteriorated.  At a time of constrained resources, pushing back harder against China required painful—perhaps prohibitive—trade offs with other pressing geopolitical priorities in Europe and the Middle East.

Even so, don’t you think Obama could have done better? He was so insistent on the pivot to Asia and it turned out to be just words only.

The commonplace fear of entrapment—the danger that the United States might be dragged into a conflict by an ally over an issue peripheral to U.S. interests—also informed the Obama administration’s thinking.

But, in the case of Japan, this fear may have been misplaced. Japan has demonstrated impressive restraint over the Senkakus. The Japan Coast Guard, in particular, has responded to near constant Chinese challenges at sea with professionalism and proportionality.   Such restraint has helped to maintain an uneasy stalemate.  And, it has also deprived China an excuse to escalate tensions.

The lesson to me is that we should avoid placing China and Japan on the same moral plane.  This kind of equivalence is unhelpful and it undermines alliance cohesion.

And there is a new president in the Philippines.

While the definitive story of China’s seizure Scarborough Shoal in 2012 remains to be written, this incident should serve as a cautionary tale. And, the incident remains part of the larger context of U.S. relations with the Philippines today.

During the standoff, the United States mediated the dispute between the Philippines and China. Both rival claimants agreed to withdraw from the shoal. Yet, China returned to the scene and consolidated its position there. China has since administered access to the waters in and near the shoal. What happened?  How did the Philippines perceive our actions (or lack thereof)?  I think this incident powerfully influenced Manila’s strategic calculus.

In dealing with our allies and friends, any administration has to strike a delicate balance between promoting security and promoting our values.  Sometimes we have to advance one at the expense of the other. I’m not persuaded that the Obama administration struck the right balance.

And there comes President [Donald] Trump, and he seems to be mending the relationship with the Philippines, lauding its anti-narcotics operation, and trying to mend the security relationship between the United States and the Philippines. Is the Trump administration going back on the right track in terms of the situation in the South China Sea, restarting the FONOP, and they are not saying it is innocent passage or anything?

There were some initial concerns in the early months of the Trump administration that it had not followed up with more FONOPs following the last under the Obama administration in October 2016. But, we are now seeing encouraging trends, including a growing number of FONOPs and regular patrols in the South China Sea. But, the FONOP program is just one tool at our disposal and it addresses only one part of a larger Chinese challenge in the maritime domain.  In other words, FONOPs are not a panacea.

In my view, we need to rethink our approach to China. Historically, at least since Nixon’s opening to China in 1972, the United States has premised its relationship with China on engagement. As I mentioned earlier, since then, we have sought to engage China to shape its behavior and to collaborate on global challenges.

To be sure, there were always elements of disagreement, hedging, and competition in the relationship.  But, we placed engagement above areas of divergence.  The primacy of engagement is driven again by narratives that we needed China’s cooperation and that actions that could be perceived by Beijing as adversarial could produce a self-fulfilling prophecy.

My hypothesis is that the primacy of engagement has biased U.S. policy toward insulating the negative dimensions of Sino-American relations from the larger goal of engagement.  Such compartmentalization may have made sense in an earlier era when China was weak.  But, as China has become much stronger and as the nature of the relationship has changed accordingly, this bias needs to be addressed. 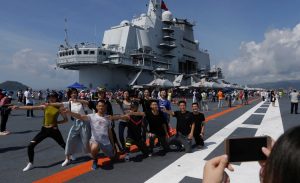 Visitors pose for pictures on China’s first aircraft carrier Liaoning during an open day at a naval base in Hong Kong, China, July 9, 2017. China Daily via REUTERS

It may be time for us to conceptualize our relationship in terms of great power competition. If so, then it may behoove us to demonstrate our willingness to put the larger relationship at risk in order to demonstrate our resolve. If China holds at risk an area of concern to us, the United States should be willing to hold at risk something else that China values. This may mean holding at risk elements of our engagement strategy that remain sacrosanct.

If the dispute over the South China Sea is about core principles, such as the integrity of the liberal international order, then the stakes are very high.  And, if the stakes are very high, then we should dare greatly to defend those principles. If we accept these propositions, then are we prepared to hold at risk China’s core interests or other peripheral interests? Would we be willing to penalize China in other areas when Beijing transgresses in the South China Sea?  What would we hold at risk?  These are the critical questions going forward.

This gets back to my earlier point when I disputed the notion that it is “game over” in the South China Sea. The game is not over. If we believe that Chinese expansionism in the South China Sea reflects a larger, longer-term competition, then the game has just begun.  The first step, however, is to acknowledge that the nature of the relationship has changed in some fundamental ways. Business as usual, such as placing engagement above areas of contention, may no longer be prudent. The modalities for this game, including the language we use to describe the relationship and the actions we undertake to respond to China’s assertiveness, will have to change too.