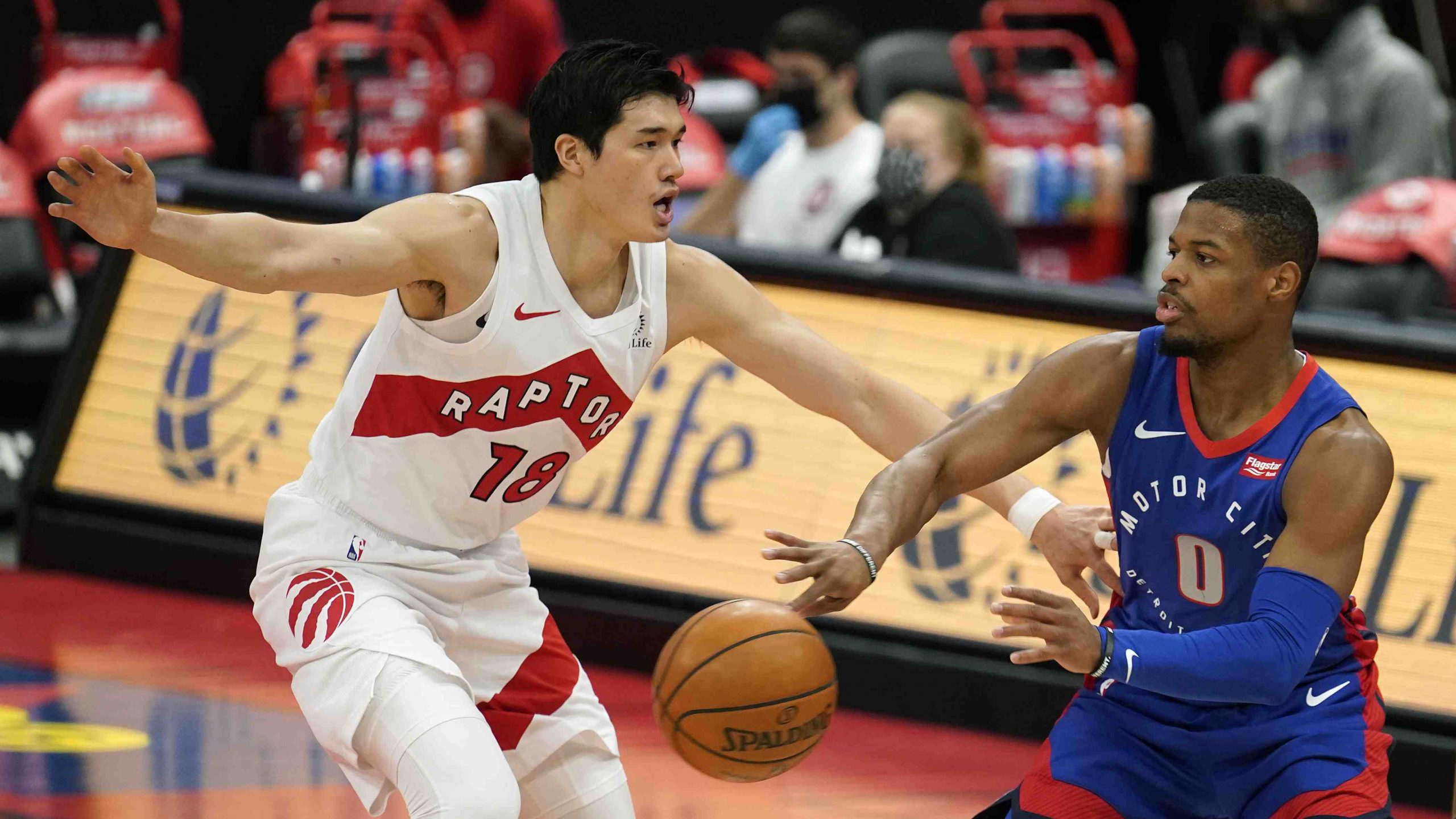 Third-year pro Yuta Watanabe bounced back and forth between the NBA’s Memphis Grizzlies and the Memphis Hustle, their NBA G League affiliate, during his first two seasons.

Three days after scoring an NBA career-high 21 points against the Orlando Magic on April 16, Watanabe signed a standard NBA contract with Toronto.

The hard-working small forward’s versatility and defensive tenacity are among his trademarks on the court. An emerging presence as an improved offensive player also helped him land another two-way contract for the 2020-21 season, this time with the Raptors.

Raptors general manager Bobby Webster and head coach Nick Nurse have both spoken highly of Watanabe’s performance since he joined the club. Nurse expressed delight in Watanabe being given a more customary role with the club, when it was formally announced that he received a new contract on Monday, April 19.

“Good for him,” Nurse said earlier this week. “He deserved it. He earned it.”

Since the start of the 2017-18 season, the two-way contract stipulated that NBA teams could use players (a maximum of two per franchise) for a limited number of NBA games and 45 total days on the active roster. In essence, the NBA expanded team rosters from 15 to 17, giving them the option of having a pair of two-way players, too.

Because of ancillary factors involving the COVID-19 pandemic, including travel, the NBA is allowing players on two-way deals to stay with the parent club for the entire 2020-21 season.

So why did the Raptors rip up Watanabe’s old contract and give him a new one before the season ended?

“We had the roster spot to do it with,” Nurse said. “He’s been a good player and he’s working hard … and I certainly think he’s under consideration to be part of this team going forward. And if he can keep getting better, it’s a spot there for him to earn and continue to get minutes and all those kinds of things.

“That’s what we’re about: developing players and giving them opportunities too, and when they make the most of it, we try to keep growing with them and how to become even better players and better teammates for the Raptors.”

The 26-year-old Watanabe will be paid $321,893 USD (about ¥34.8 million JPY) for the rest of the season, according to published reports. He will make $1.76 million ( ¥1.9 billion JPY) next year. (The Raptors didn’t disclose financial details or other terms of the contract.)

“I was super happy. I’m really excited,” Watanabe told a news conference via Zoom after a team practice on Tuesday, April 20, reflecting on what the new contract means to him. “This is what I’ve been working for. I’m motivated more than ever and I’m ready to work.”

He added: “Next year is not guaranteed yet, so I’ve got to keep showing what I can do.”

Watanabe has become a regular part of the Raptors rotation this season, providing a solid spark off the bench, especially in a big chunk of games before he signed the new contract. In the previous two seasons, he appeared in a combined 33 games for the Grizzlies and played 55 games for the Hustle.

In the last 10 games before the Raptors’ clash with the Brooklyn Nets on Wednesday, April 21 in Tampa, Florida (their temporary home during the pandemic), the Kagawa Prefecture native had given Nurse dynamic productivity while averaging nearly 20 minutes of action: 8.7 points, 4.2 rebounds, 1.5 assists. He shot 60% from the floor in those games.

A reporter mentioned Hideki Matsuyama’s victory in the Masters on April 11, when he became the first Japanese man to win a golf major, then asked if there are parallels between how Matsuyama’s life will change and how Watanabe’s will change because of his new contract.

“I personally don’t know him, but I’m happy for him,” Watanabe said on the Zoom call. “As a Japanese, that’s something that’s really a huge achievement, so he gave me a lot of motivation. I am really happy for him.”


New Contract Not a Surprise for Watanabe

Watanabe, who is represented by Wasserman, a major sports management firm, told reporters the new deal was in the works and wasn’t a spur-of-the-moment decision.

“Me and my agent have been talking about this like about a week, and I actually signed the form after the last game,” he said.

Before signing the new contract, Watanabe tried to keep it off his mind while he played, so he wouldn’t create any additional pressure for himself.

“I’ve been trying not to think about it,” he said. “I didn’t want to get caught up by it, so my mentality before the game is always play defense, run hard, play hard, just like I’ve been always doing, and everything will take care of itself.”


Asked how his parents reacted to the news, Watanabe confirmed that it was the same.

“Just like me, they are super happy,” the 2018 Atlantic-10 Conference Defensive Player of the Year said. “My mom was almost crying, and I told my mom this is just the beginning. We were really happy and they say they are really proud of me.”

As for Nurse, he said he’s pleased that one of his players earned a new contract by giving it his all on the court.

“I’m really happy for him,” the coach said. “I’m always happy when a player gets rewarded and it seems to me that their market value or their contract value continues to rise because, especially a guy that’s worked so very, very hard.”