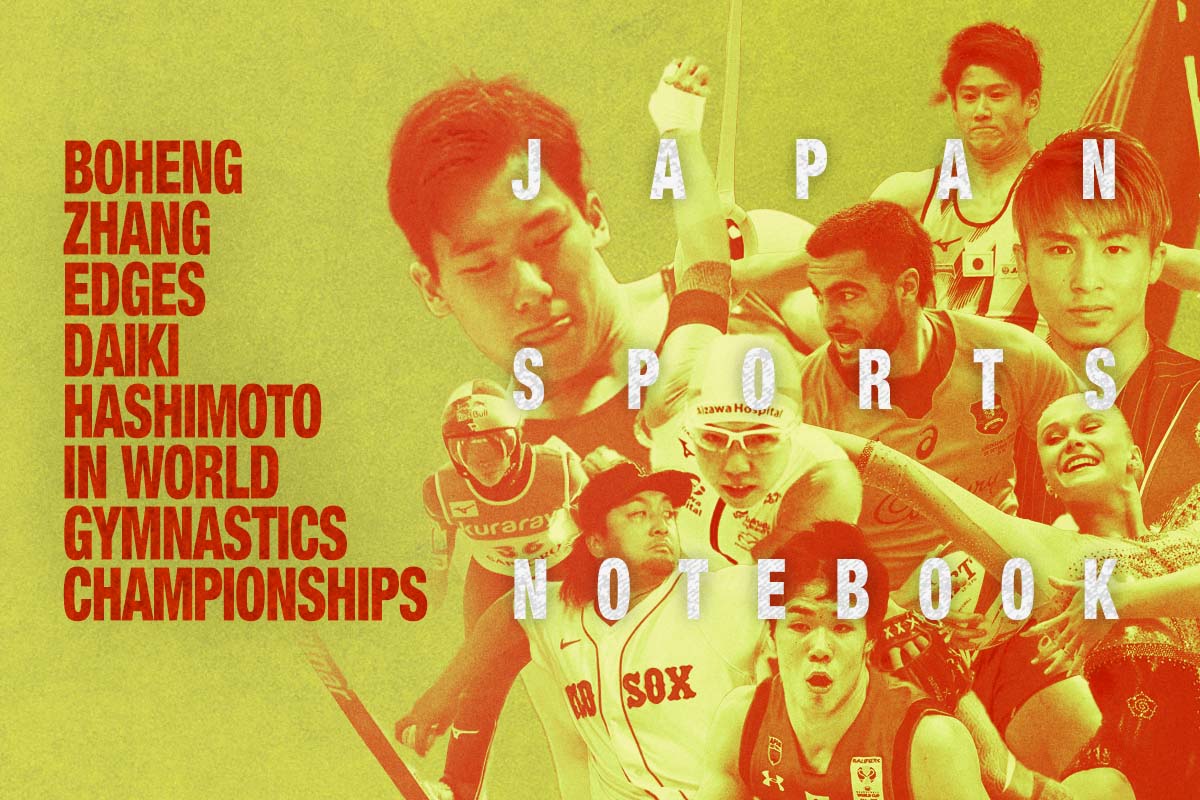 China's Boheng Zhang in action on the horizontal bar during the men's all-around final at the Aritstic Gymnastics World Championships on October 22 in Kitakyushu. (Kim Kyung-Hoon/REUTERS)

It wasn’t the encore that his fans had hoped for.

After a glorious experience at the Tokyo Olympics, where he won the men’s all-around title and added a second gold in the horizontal bar competition, Daiki Hashimoto had to settle for second in the all-around at the Artistic Gymnastics World Championships on Friday, October 22.

China’s Boheng Zhang was a little bit better from start to finish in the all-around finals at Kitakyushu General Gymnasium.

It was a reversal of fortunes for international debutante Zhang, who trailed Hashimoto by 0.040 points after qualifying on Wednesday, October 20.

“I’m so excited ー I may stay up all night!” Zhang exclaimed after winning the title. “To be honest, it was a little bit nerve-wracking waiting for Hashimoto’s score [on the horizontal bar]. It was a really close competition. We both had a high level performance today, but I am so happy to be the champion.”

Hashimoto said the results at the world championship will help him in his development as a gymnast.

“I don’t want to make any excuses,” Hashimoto commented. “There should be no reason why I could not win this time. Maybe I lack something … but I think it will make me stronger, and I am going to take this experience and use it to help me grow even more.”

Hashimoto’s title hopes were reduced with a fall during his pommel horse routine.

Pressure to attain a perfect performance on the horizontal bar was in the back of Hashimoto’s mind, he revealed later.

“[Zhang] was great tonight,” Hashimoto said, according to The Associated Press. “There is no question he is world No. 1. I knew I had to put in a perfect performance on the horizontal bar and that was difficult to do.”

Melnikova amassed 56.632 points in the final round. U.S. teammates Leanna Wong and Kayla DiCello finished second and third with 56.340 and 54.566 points.

The 21-year-old, who was the Olympic all-around bronze medalist, became the third Russian woman to win a world title in the event. Svetlana Khorkina achieved the feat in 1997, 2001 and ’03, and Aliya Mustafina followed in 2010.

“I’m so happy,” Melnikova told reporters. “I did everything I wanted. I had only one month to prepare. I was really surprised I could do all I did today! I feel like I made history.”

Japan exhibited fighting spirit and an abundance of energy in a defeat to Australia on Saturday, October 23.

The match was a valuable international test for Japan in the run-up to its autumn tour in Europe, where the Brave Blossoms will face Ireland (November 6), Portugal (November 13) and Scotland (November 20).

Against Australia, Lomano Lemeki and Ryoto Nakamura both scored a try, while flyhalf Rikiya Matsuda booted two penalties and a conversion.

The Wallabies lead 17-13 at halftime. Japan stayed competitive and found itself within target of a comeback victory trailing 27-20 after a Nakamura try in the 55th minute.

“Big games like this can be decided by little things. We need to keep improving, and come out stronger each game,” Nakamura said after the match, according to Kyodo News.

Japan had to play with only 14 men after Lemeki was ejected for a shoulder charge in the 49th minute.

The Hokkaido Prefecture native was in third place after her first jump. She then soared more than 90.5 meters through the air on her next two attempts to claim the win.

Nao Kodaira, the 2018 gold medalist in the women’s 500 meters at the Pyeongchang Olympics, provided a big reminder of her target for the upcoming Beijing Games next February.

The 35-year-old Kodaira zoomed to victory in the 500, her seventh straight title and 12th overall in the event, at M-Wave ice arena in Nagano. Kodaira completed the race in 37.58 seconds, with Miho Takagi placing runner-up in 37.65 on the opening day of the National Single Distance Speed Skating Championships.

“My vector is pointing upward. I feel as though I can improve my time from here,” Kodaira was quoted as saying by Kyodo News.

Daisuke Matsuzaka faced one batter in a ceremonial final appearance to wrap up his 23-year pro baseball career on Tuesday, October 19.

“I stepped on the mound with a feeling of gratitude to the people who have supported me,” Matsuzaka told reporters, according to The Asahi Shimbun. “I also wanted to take this opportunity to set matters right for myself.”

Indeed, he wanted one more shot at pitching in a game after dealing with numerous health-related setbacks over the past several years.

The 41-year-old Matsuzaka, whose rise to prominence began when he pitched for title-winning Yokohama High School at the Spring Koshien and Summer Koshien baseball tournaments in 1998, played for the Lions from 1999-2006 before joining the Boston Red Sox. Known throughout the baseball world as Dice-K, the right-hander suited up for the Red Sox from 2007-12 before playing his two final MLB seasons with the New York Mets.

The Boston Red Sox summoned veteran reliever Hirokazu Sawamura from the bullpen during Games 1, 3 and 5 of the American League Championship Series against the Houston Astros.

Houston defeated Boston 5-0 in Game 6 on Friday, October 22 to punch its ticket to the World Series.

Sawamura faced a total of 11 batters in his three ALCS appearances.

“I’m honored to play for this team again and want to cherish every day to achieve my dream,” Baba, a Tokyo Olympian, wrote on Twitter.

Baba, who averaged 8.0 points, 2.3 rebounds and 1.2 assists in 31 games for Melbourne United last season, began his pro career with the B. League’s Alvark Tokyo in 2017. The Toyama native spent the pandemic-shortened 2019-20 season with the Legends.

The 28-year-old Inoue (21-0, 18 knockouts) is coming off a third-round technical knockout of Filipino Michael Dasmariñas on June 19 in Las Vegas.

Thai fighter Dipaen is 12-2 (11 KOs) in his pro career. The 30-year-old is the IBF’s sixth-ranked bantamweight.

Midfielder Koya Yuruki scored a pair of first-half goals to help carry the Urawa Reds to a 5-1 victory over Kashiwa Reysol on Friday night, October 22.

Yuruki hit his target in the 15th and 23rd minutes, and the Reds took a 4-1 lead into the intermission at Saitama Stadium.

Despite the comfortable lead at halftime, Reds manager Ricardo Rodriguez wanted his team to maintain an aggressive mindset on offense in the second half.

“Let’s use the space beside the opponent’s midfield,” were remarks he made during the break, according to the team’s official website.

He added: “The match is not over yet. Let’s get additional points and win.”

Third-place Vissel Kobe had 60 points through Friday, Yokohama F. Marinos was No. 2 with 72 points and reigning champion Kawasaki Frontale, who recorded 25 wins, six draws and one loss in 32 matches to date, had 81.

“To be honest, I’m disappointed. It feels like we lost a winnable match.”

ーKazuki Himeno, the Brave Blossoms’ No. 8, on Japan’s loss to Australia.