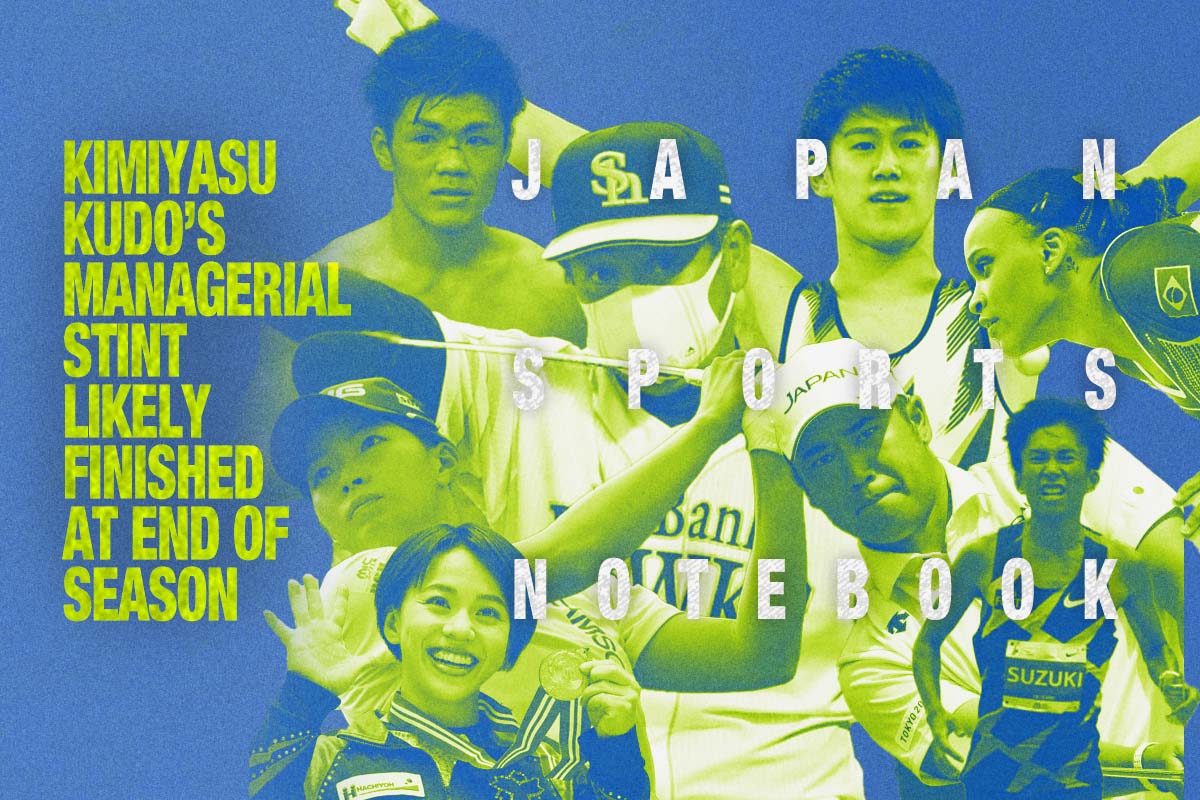 Fukuoka SoftBank Hawks manager Kimiyasu Kudo is in his seventh season at the helm.

The Kimiyasu Kudo era has been defined by magnificent achievements for the Fukuoka SoftBank Hawks, and that era now appears to be reaching the finish line.

Kudo will leave as dugout boss at the end of the season, according to published reports on October 10, a day after the Hawks lost their eighth straight game. Although he has been offered a new contract, he has declined the deal, it was reported.

The 58-year-old Kudo is in the second year of a two-year contract.

Since Kudo managed his first game for the Pacific League club in 2015, the Hawks have won five Japan Series titles, including in his debut season and four straight from 2017-20.

This season, the Hawks have struggled to remain in the playoff hunt. With a record of 56-61-20 through Friday, October 15, the Hawks entered the weekend five games behind the third-place Tohoku Rakuten Golden Eagles in the Pacific League standings.

The top three teams advance to the PL Climax Series, and the Hawks are on the verge of missing postseason play for the first time since 2013.

Which is why Kudo’s focus in public is on the team’s five remaining regular-season games ー and concluding on Sunday, October 24 against the Eagles in Sendai.

“There’s nothing I can talk about right now,” Kudo was quoted as saying by Kyodo News when asked about his future with the team. “We’re all still in the middle of a battle.”

Perhaps in private talks he’s more willing to discuss the issue at length. Talks with the team’s front-office executives could, of course, lead Kudo to change his mind in the coming weeks.

Being in title contention and facing the pressure of championship expectations every season are a big part of the job for the Hawks manager.

Will Kudo re-emerge as a manager elsewhere in another year or two or three after a sabbatical and/or a return to TV?

One thing is certain, though: He’ll be a man in demand.

After all, Kudo’s baseball career has been defined by winning. He was an 11-time Japan Series champion during his playing days (1982-2010).

End of an Era: Fighters’ Kuriyama Won’t Return in 2022

Hokkaido Nippon Ham Fighters manager Hideki Kuriyama will leave his position at the end of the season.

Kuryiyama, the winningest manager in team history, made the announcement on Saturday, October 16.

The 60-year-old has led the Fighters since 2012. They won the PL pennant in his debut season and captured the Japan Series title in 2016.

Kuriyama received notable recognition for guiding two-way star Shohei Ohtani at the outset of his career.

Zozo Championship Returns to Japan After a Year’s Absence

The event is the lone PGA Tour stop in Japan.

Last year’s event was moved to Sherwood Country Club in Lake Sherwood, California, due to the global pandemic, and American Patrick Cantlay grabbed the winner’s trophy. Jon Rahm and Justin Thomas were one stroke off the pace.

The foursome were tied with 10-under 206s after three rounds at Tomei Country Club in Susono, Shizuoka Prefecture.

Shibuno collected her first LPGA of Japan Tour victory since the Daio Paper Elleair Ladies Open in November 2019, and her fifth victory on the Japan Tour.

“I cried when I saw the real breaking news on my smartphone,” Shibuno was quoted as saying by Sports Nippon newspaper after the playoff. “It’s been a while since I’ve been so happy and happy.”

The 22-year-old, who is known as “Smiling Cinderella,” rose to global stardom by winning the 2019 Women’s British Open.

Many top veteran athletes take time off following the Olympics, giving younger individuals and up-and-coming talent the opportunity to showcase their skills. But there will be plenty of marquee names in Kitakyushu, including Hashimoto, who also took home the Olympic horizontal bar title, and Kohei Uchimura in men’s events, and Mai Murakami, a bronze medalist in women’s floor exercise at Tokyo’s Ariake Gymnastics Centre, and Brazil’s Rebeca Andrade, a bronze medalist in the Olympic all-around competition.

The 32-year-old Uchimura, whose nickname is “King Kohei,” is a two-time Olympic all-around champ and six-time all-around world champion, could be participating in his final career meet.

Andrade is a study in perseverance after undergoing a trio of surgeries to repair knee injuries between 2015-19.

“Today I am a different athlete because of the [state of] mind I have,” Andrade commented in a story for the Federation Internationale de Gymnastique (also known as the International Gymnastics Federation) website.

She added: “I have had various opportunities and moments to give up ー but I didn’t. I want to show people to not give up, believe in your dream and stick with it. We will always have difficulties, but we have to be strong enough to overcome them. I had to go through that process in order to get where I am now, and I am very happy to be here.”

“It is very rare to have two big competitions in my home country in the same year. I decided to participate because I thought it would be a very valuable experience,” Murakami recently told the FIG website.

“And at the Olympics, there were no spectators, so I couldn’t get many people to watch my performances. I was a bit disappointed about that, so I decided to participate at Kitakyushu to be able to perform again in front of spectators and the whole world.”

Mikito Nakano and Kenji Fujita are getting ready to lace up their gloves on October 29 in Kissimmee, Florida, against to-be-announced opponents, Teiken Boxing Gym announced on Wednesday, October 13.

Nakano, a 26-year-old super featherweight, is 5-0 since making his pro debut three years ago this month.

While their opponents have yet to be revealed, the 26-year-old Mikito Nakano, who has five straight wins, including four knockouts after turning pro in October 2018, is expected to have an eight-round bout.

Fujita, a 27-year-old featherweight, was 153-21 as an amateur fighter before making his pro debut in March. He’s scheduled to fight in a six-round bout in Florida.

“I’m really happy to be able to [fight] on the real American stage,” during the  global pandemic, Fujita said in a news release.

He added: “I will do my best to show Kenji Fujita to the United States.”

In his first racing in Formula One, Yuki Tsunoda finds himself near the middle of the pack in the drivers standings.

Up next: the United States Grand Prix in Austin, Texas, October 22-24.

The U.K.-based Scuderia AlphaTauri driver recently acquired a home simulator and discussed the benefits of it in an interview with planetf1.com. With the simulator available at any time, he can maintain his training while away from the team’s headquarters in Italy.

“I’ve been doing a lot of laps,” Tsunoda said. “Of course, it’s not quite the same as being in the full-scale sim at Red Bull, which is not like the real thing, but it is the most realistic one I have ever used. The main benefit of the sim is learning about the track and sharpening up my driving. I can also review something that happened in the previous race or I can practice some particular piece of driving.”

What other benefits are there?

“Having the simulator at home now is useful and I can also discuss what I am doing on it with my engineer and simulate a race weekend … based on plans made by the engineer for me to use, so we can work on it together,” Tsunoda stated.

Ethopia’s Seifu Tura Abdiwak grabbed the men’s title with a time of 2:06:12.

For Suzuki, who set a Japanese record in the marathon (2:04.56) in February’s Lake Biwa Mainichi Marathon, the Chicago event was a challenge from start to finish.

“I pretty much had to push hard right from the start and was still far away from getting a medal,” Suzuki, 26, was quoted as saying by The Yomiuri Shimbun.

Jamie Joseph’s Japan squad is preparing to face Australia in a test match on Saturday, October 23 in Oita.

The clash with the Wallabies will give the Brave Blossoms a chance to test their fitness and tactics before a trio of autumn tests in Europe against Ireland, Portugal and Scotland on successive Saturdays, November 6, 13 and 20.

Labuschagne will fill the leadership role held by Toshiba Brave Lupus standout Michael Leitch, who is among the 37 players named to the squad for the autumn tour.

Suntory Sungoliath utility back Ryoto Nakamura was picked to be the new vice captain.

“It was a pattern we always practice, Ryo [Hatuse] gave me a good ball and I timed my jump well. I could head it into the ground, which makes it difficult for goalkeepers.”


“I got the courage just to speak out growing up and seeing all of the people around me doing amazing things,  and not having any fear and standing up for what they believe in.”

ーNaomi Osaka, reacting to being honored as the Wilma Rudolph Courage Award winner at the Women’s Sports Foundation’s 2021 Annual Salute to Women in Sports on October 13. The four-time Grand Slam singles champion was recognized for raising awareness for mental health and social justice.