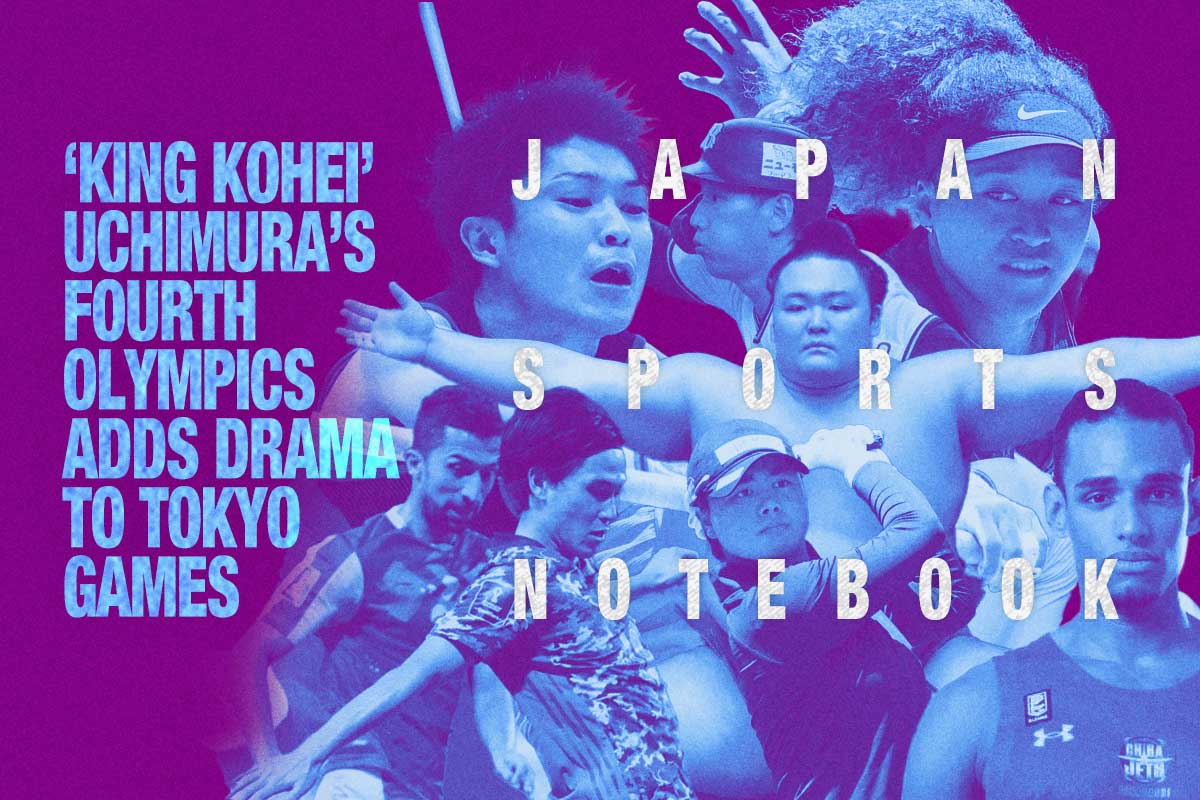 Kohei Uchimura earned a spot to his fourth Olympics based on a tiebreaker that took into account his high-profile status within the sport's global pecking order.

But with a runner-up finish in the event in Gunma Prefecture and a higher world ranking than vault specialist Hidenobu Yonekura, who walked off the mat tied in qualifying points, the gymnastics legend punched his ticket to the Japan men's national team for the upcoming Tokyo Olympics.

The 32-year-old Uchimura took second with 15.100 points in the horizontal bar event, narrowly trailing Daiki Hashimoto (15.133) in the hunt for the title.

Despite a dazzling performance on the bar in which he demonstrated great command of his overall routine, the two-time Olympic all-around champion (2012 London Games, 2016 Rio de Janeiro Games) had a slip-up that cost him a fraction of a point that was the razor-thin difference between first and second.

Despite qualifying for the Tokyo Olympics on a technicality, Uchimura was far from ecstatic in his post-event comments to the press.

“I thought I failed to qualify but then was told I’m going. I don’t think I deserve it,” Uchimura told reporters. “I apologized to Yonekura afterwards.”

It was a revelatory moment shared by an all-time sports great and the 24-year-old Yonekura.

Uchimura collected the silver medal in the men's all-around at the 2008 Beijing Olympics, signaling his arrival at the elite level on the global stage. What followed was a remarkable run from 2009-16, with all-around world titles in each of the non-Olympic years.

Indeed, he raised the bar so high ー he's often called the great male gymnast of all time ー and set a standard of excellence that may never be equaled in our lifetimes.

Which is why Uchimura recognizes when he doesn't replicate his own amazing feats.

“I don’t feel that after today’s performance, I really deserve to be called ‘King,' ” Uchimura stated on June 6.

While injuries have hampered Uchimura's intense training regimen in recent years, including forcing him to skip the 2019 world championships, he is eager to make an impact for Team Japan at the Tokyo Olympics.

Uchimura will have a supporting role instead of being the headline act in what is planned to be his Olympic swan song.

“It was really hard for me, as such an old man, to perform after the new generation,” Uchimura was quoted as saying by Reuters. “I may not be part of the all-around team effort, but there’s still things I can contribute due to my experience.”

The one-year ban was announced on Friday, June 11.

Asanoyama's salary will be slashed in half for six months at the outset of the suspension.

The Toyama Prefecture native, who has grappled in the elite makuuchi division since September 2017, ate at a dining establishment during the Summer Basho, a transgression reported by a weekly magazine.

The JSA's pandemic rules require wrestlers to eat at home during the pandemic.

Buffaloes' Yoshida Having a Great Season at the Plate

Yoshida, who hit .350 last season and won the Pacific League batting title, also leads Japanese pro baseball in on-base percentage (.430). In 230 at-bats, he has 12 strikeouts, which is the fewest among players eligible for the batting title. (To be eligible, a hitter needs a minimum of 3.1 plate appearances multiplied by the number of his club's games.)

The Fukui Prefecture native made his NPB debut with the Buffaloes in 2016.

He was the PL's monthly offensive MVP for May.

Yoshida's biggest objective for this season has nothing to do with the gaudy statistics he has produced at the plate.

"One year without injury," he said of his top goal, according to Daily Sports, before adding, "I want to aim for the best as a team and as an individual."

Shohei Ohtani worked five innings in a no-decision in the Los Angeles Angels' 6-5, 10-inning road victory over the Arizona Diamondbacks on June 11.

He allowed five hits and two runs, while walking two and striking out eight. Ohtani hit one batter and threw a wild pitch. He also balked twice in the fifth inning.

Ohtani, who batted second, moved to right field in the sixth inning.

He went 2-for-4 with an RBI double in the third, then scored to make it 3-0. He added his 15th double of the season in the seventh.

Ohtani also fouled a ball off his right knee in the third inning. He was in pain and slumped to the ground before consulting with the team’s medical trainers.

Then he went back into the batter’s box and clubbed his first double of the game.

“When he’s faced with a dilemma, he turns up the dial,” Angels manager Joe Maddon told reporters later.  “Love it. He knows exactly what he’s doing at all times, I mean exactly.”

For Glasgow-based Celtic, there's pressure to win the Scotish Premiership title every year, and new Celtic manager Ange Postecoglou joins the club weeks after it failed to win the league title for the first time in 10 years.

The 55-year-old Athens-born Postecoglou guided Marinos from 2018 to this week, leaving the J. League squad after he and team management tore up his coaching contract.

With Postecoglou at the helm, Marinos won their first J. League title in 15 years in 2019.

In a team-issued statement, Postecoglou said: "After three-and-a-half years I have made a decision to move on to a new challenge. Words cannot express the feeling of gratitude I have towards everyone involved at the football club.

"From the board of directors to the staff, this special group of players, and finally the most passionate supporters in the country, everyone has given me the best support any manager could want."

Now he shifts his focus to the new challenge at Celtic, who finished runner-up to the Glasgow Rangers last season.

"I will be doing everything I can to get our great club back on top," Postecoglou was quoted as saying by the BBC.

"We want to entertain our fans and we want to win, these are the objectives which I always set myself and which I now begin work on.

"The opportunity that has been given to me is one of the greatest honors in football."

"I'm happy to go level with such a great player," Minamino told reporters at Panasonic Stadium, according to Kyodo News.

He continued: "Kyogo [Furuhashi] provided a good cross. I was targeting that space and I'm happy to have scored as it really was a nice pass."

In related news, Japan topped Serbia 1-0 in another friendly on Friday, June 11. Junya Ito scored the lone goal in the 48th minute in Kobe.

Mana Iwabuchi had two goals for Nadeshiko Japan in the friendly, while Yuzuho Shiokoshi added a brace in her international debut.

Dai Oketani directed the Ryukyu Golden Kings to new heights as the second head coach in team history, including a pair of bj-league championships (2008-09 and 2011-12).

Nine years after he last coached the Golden Kings, Oketani was hired as the team's new coach.

Oketani replaces Hiroki Fujita, who takes over as his replacement with the B. League's Sendai 89ers, a second-division team. Sendai went 35-24 this past season. Ryukyu, a B1 team, had a 40-16 record.

"Although the players and staff have changed, we will do our best to further strengthen the Kings' winning culture that has been passed down," said Oketani, who led the Iwate Big Bulls (2012-15), Osaka Evessa (2015-18) and 89ers (2018-21) before heading back to Okinawa.

The timeline of coaching moves happened within a span of three days. On Tuesday, June 8, it was announced that Oketani was leaving the 89ers. A day later, Fujita was named Sendai's next coach. On Thursday, June 10, Oketani was unveiled as the next Golden Kings bench boss.

"Mr. Oketani's organizational strength, which respects the abilities of individual players but values ​​the discipline of the team, is what the current Kings need," the longtime Ryukyu executive said in a statement, "and the appearance of players fighting with the new head coach in the 2021-22 season I can't help but imagine and raise expectations."

In other Golden Kings news, guard Koh Flippin, who began his pro career with the Chiba Jets in 2019, has signed a contract to play for the Okinawa-based club in 2021-22.

The 25-year-old Flippin was an integral part of the backcourt rotation for the title-winning Jets last season.

"Okinawa is a special place that is also my roots and identity," said Flippin, who came off the bench in all 81 of his regular-season appearances in two seasons.

"I promise to do my best to bring maximum success to the team. I am looking forward to seeing you all."

A change of scenery could be a big boost for the young guard. And this reporter believes Flippin has the potential to be a great player in the B. League for years to come.

B. League Finals MVP Sebastian Saiz is on the move for the second straight offseason.

He left the Sunrockers Shibuya to sign with the Jets before the 2020-21 campaign. Now Saiz will bring his array of talents to the Alvark Tokyo, it was announced on June 10.

The grass-court event, which starts on Monday, June 14 in Berlin, is a key part of players' preparation for Wimbledon, the only Grand Slam tournament held on grass.

Bett1 Open organizers confirmed on Monday, June 7 that Osaka would not compete in the upcoming event.

Wimbledon begins on June 28, and there's no official word yet if Osaka will participate in the tourney.

After winning her first-round match at the French Open late last month, Osaka, who refused to participate in press conferences at the Grand Slam event, withdrew from the tournament citing "huge waves of anxiety."

“I was able to win because my family supported me and was always there for me."

ーYuka Saso, who won the U.S. Women's Open in a three-hole playoff over Nasa Hataoka on June 6 in San Francisco. Saso, 19, climbed from No. 40 to No. 9 in the world rankings after earning the first major victory of her career.

"I've wanted to break 10 seconds all this time, so I'm happy to have done so. I felt this was a meet I didn't want to miss. I see the Olympics as being the real competition."

ーSprinter Ryota Yamagata, on establishing the Japanese record in the men's 100 meters (9.95 seconds) at the Fuse Sprint track meet on June 6 in Tottori.