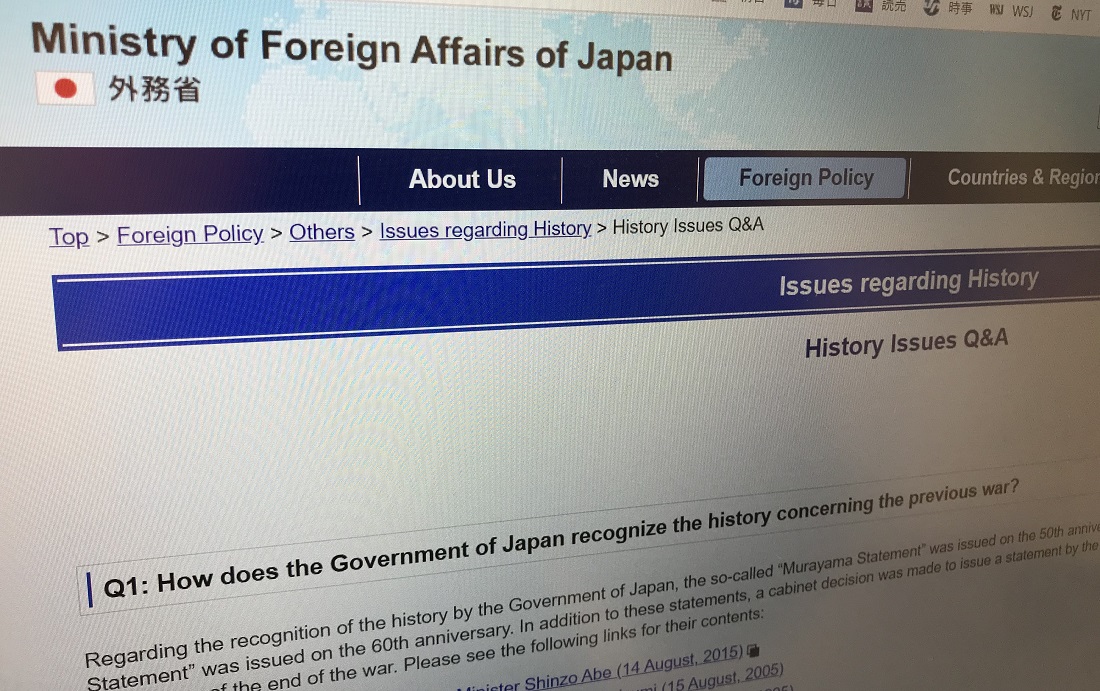 Japan’s foreign ministry has revised information about the comfort women issue on its homepages so as to provide a clearer and more historically accurate description of the issue, while decrying the use of terms that distort the past.

On February 4, a source from the Ministry of Foreign Affairs revealed that from February the ministry’s homepage would more forcefully rebut arguments regarding comfort women that rely on the use of inaccurate terms such as “forceful taking away” (by the Japanese military and government authorities) and “sex slaves.” The goal is to broaden understanding of the facts surrounding the controversy in Japan and overseas.

Japan-South Korea relations have recently reached a new level of acrimony because, among other things, a South Korean district court ordered the government of Japan to pay restitution to several former comfort women.

The section “Issues Regarding History” now carries a fuller and more precise explanation of the problem on its “Q&A” page and in a document titled “The Issue of Comfort Women.” Whereas in the past the homepage made passing reference to arguments using historically inaccurate language such as “forceful taking away” and “sex slaves,” from February 1 the issue is discussed in more detail, including explanations of why these emotionally powerful and widely used terms are simply wrong.

Concerning the expression “sex slave,” the website argues that the expression should not be used since it “contradicts the facts.” It adds that the term was not used in the Announcement by the Foreign Ministers of Japan and the Republic of Korea on the comfort women issue on December 28, 2015.

These explanations are contained in more than one place on the foreign ministry’s homepage, but it was felt important to carry the information in the “Q&A” page as that was likely to be visited more often and therefore give the explanations more play.

The Foreign Affairs Division of the ruling Liberal Democratic Party had requested that the foreign ministry website provide a fuller explanation of Japan’s position on the comfort women question.

The foreign ministry’s updated website may be found here and its pages on the history issue may be reached here.