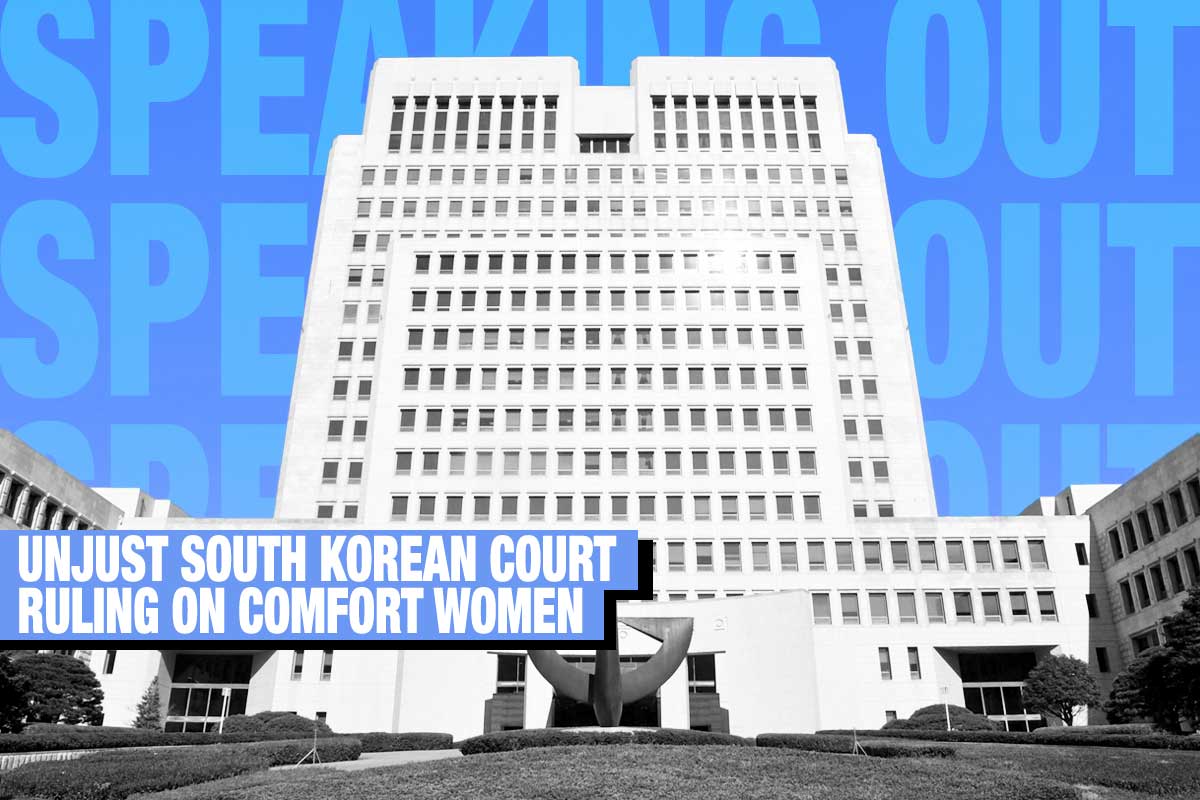 Another awful court ruling has come down in South Korea. On January 8, the  Seoul District Court ordered Japan to pay 100 million KRW (about $90,000 USD) to each of 12 former comfort women for pain and suffering.

International law provides for the principle of sovereign immunity, which  means that any sovereign state is immune from the jurisdiction of any foreign court. The principle constitutes the basis of diplomatic relations, where states respect each other’s sovereignty. Nevertheless, the Seoul District Court claimed that the comfort women system represents an anti-humanitarian crime to which the sovereign  immunity principle cannot be applied.

The ruling claimed that the comfort women system represents an anti humanitarian criminal act that was implemented deliberately, systematically and  extensively by the Japanese Empire, ran counter to international norms, and was enforced against Korean plaintiffs on the Korean Peninsula occupied illegally by the  Japanese Empire.

The claim includes double mistakes and is unacceptable.

First, the comfort women system was part of then legal public prostitution systems. This fact has recently been academically certified even by South Korean scholars based on numerous historical documents.

Second, Japan’s rule of the Korean Peninsula was legal, conducted within the framework of then- international law, and different from any illegal occupation.

Origin of the Historical Errors

In fact, however, the two historical mistakes originated in Japan. In the early 1990s, anti-Japanese groups represented by the Asahi Shimbun newspaper and lawyer Kenichi Takagi spread a lie. They said that a public system created to mobilize female workers for the war effort during World War II was used for recruiting Korean  comfort women.

They gathered plaintiffs in South Korea and filed lawsuits in Japan. A fake rumor that 200,000 comfort women were coercively recruited as sex slaves was disseminated around that time.

Since the 1980s, Haruki Wada (now a professor emeritus at the University  of Tokyo) and anti-Japanese scholars in Japan devised a theory that Japan’s rule of Korea was unlawful, and continued a campaign to have the Japanese government admit the theory. Then, the theory spilled over into South Korea.

To criticize the latest ruling, therefore, we must not only assert the  principle of international law on sovereign immunity, but also rebut the two lies originating from Japan. In 2018, the Japanese Ministry of Foreign Affairs put Japanese and English versions of a rebuttal against the theory of coercive recruitment of 200,000 sex slaves on its website. In November 2020, it added a Korean language version.

RELATED READ: Comfort Women: Were They Prostitutes or Sex Slaves?

But studies supporting public relations by the Japanese government have been very weak. A total of 47  studies on the comfort women issue have been done with financial support from the education ministry, but none of them pointed to mistakes of the “coercive recruitment of 200,000 sex slaves” theory. The Japan Institute of International Affairs, an  affiliate of the Ministry of Foreign Affairs, created a Territory and History Center in  2017 to promote research and send international messages on historical awareness and other issues in 2017, but the Center has not handled the comfort women issue.

I and like-minded scholars founded a small organization named the Historical Awareness Research Committee in September 2016 for the purpose of promoting studies and improving public relations to protect Japan’s and our ancestors’ honor. South Korea also sees the emergence of courageous persons of good sense who study historical facts and counter anti-Japanese groups.

The time has come for all of us to think hard about developing arrangements to strengthen international public relations on the realities of the comfort women system.

RELATED READ: Recovering the Truth about the Comfort Women

(A version of this article was first published by the Japan Institute for National Fundamentals, Speaking Out #754 in English on January 14, 2021, and in Japanese on January 12, 2021.)

Tsutomu Nishioka is a senior fellow and a Planning Committee member at the Japan  Institute for National Fundamentals and a visiting professor at Reitaku University.  He covers South and North Koreas.