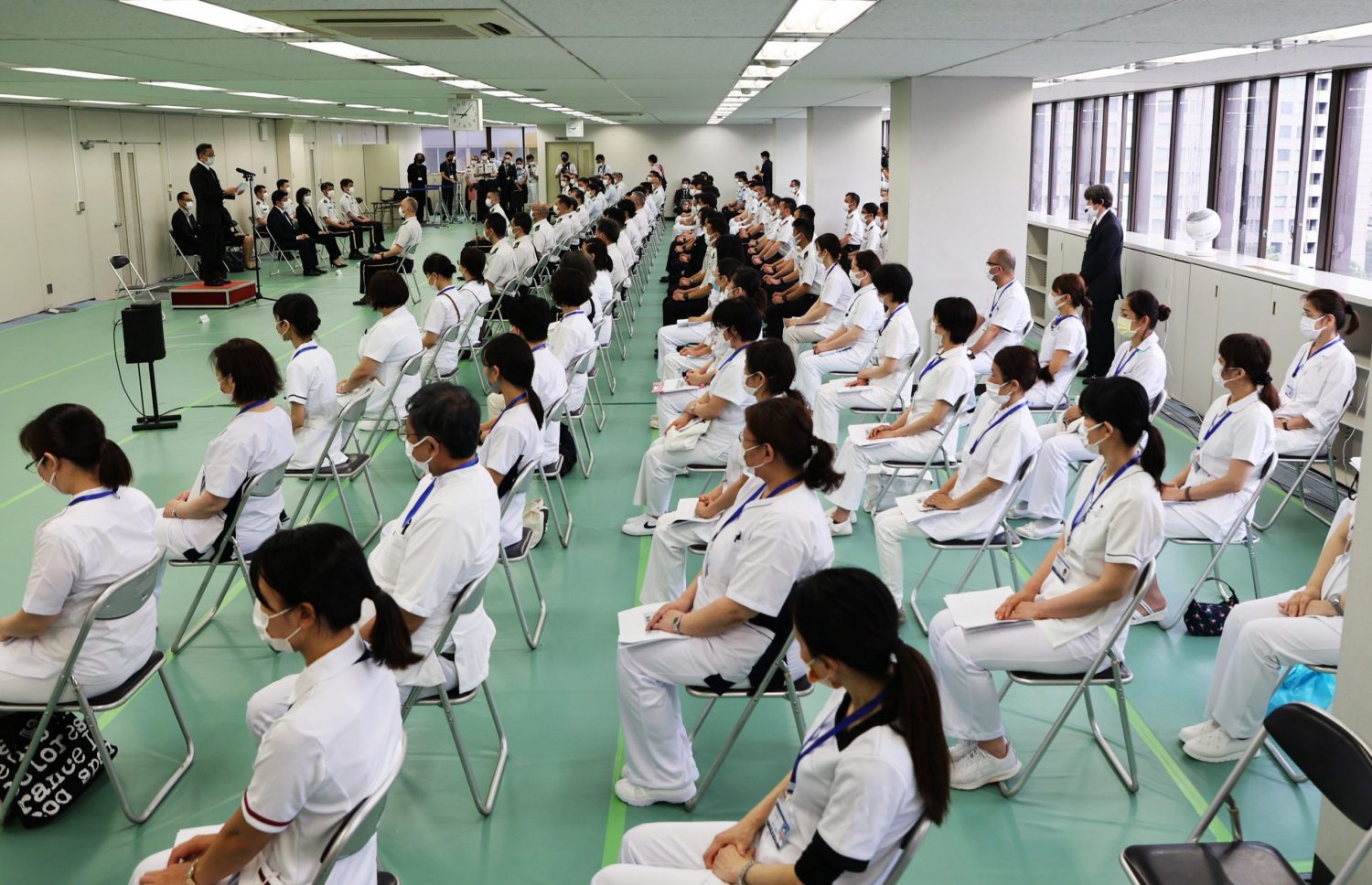 How many people can get vaccinated in a country in a day?

This is a question that few of us, perhaps even none of us thought about before the COVID-19 pandemic. But in Japan these days it is increasingly coming to the fore in the race against time to fight the virus.

Japan has until now struggled to catch up with countries such as the United States and Britain, just to name a few. As of May 18, all people over 12 can get vaccinated in the U.S., and according to the website, Our World in Data, more than 273 million people in the U.S. are now fully vaccinated. According to the same database, more than half the population of the U.K. has also received a vaccine.

In Japan, vaccinations started on February 12, but only for medical workers. Then, on April 12, vaccinations for the general public began for the over-65 age groups. Many were quick to notice that three months after vaccinations began, as of May 18, less than two percent of the population was fully vaccinated.

That data already shows improvement. To add to it, though, the pace is set to pick up even further, starting with the mass vaccinations organized by the Japan Self-Defense Forces in large cities like Tokyo and Osaka, and the increased involvement of family doctors and dentists throughout the country, and even the help of the private sector.

On May 18, the Minister in charge of vaccinations Taro Kono said in a press conference that on top of doctors, nurses and the already approved dentists allowed to vaccinate, the government was considering enlisting the help of pharmacists to help speed up the rollout.

Looking ahead, Minister Kono has also negotiated with large companies to create the option of “vaccine leave”, so that people can easily take time off to receive the jab, or make use of leave in case of side effects. Mercari, Softbank and Mitsubishi just to name a few have already expressed their will to comply. In addition, on April 30, Kono asked for the collaboration of large companies to set up vaccination centers in their own in-house facilities where possible.

On May 17, the Ministry of Defense opened its sign-up process for mass vaccinations in the two biggest cities of Tokyo and Osaka. Sign-ups are available exclusively online or through the LINE messaging app. There were staggered sign-up times at 11 A.M. and 1 P.M. in Tokyo and Osaka, respectively, for time slots over the two weeks from May 24 to May 31.

The website seemed to process the bookings without major reported glitches. The format was simple, requiring the applicant to fill out their date of birth and provide two specific pieces of information ー  the individual’s assigned vaccination number and residence code ー which were included in the vaccine coupon letters dispatched to all over-65s in the country. With these three pieces of information, the whole booking process could be completed easily in under thirty minutes.

In Osaka, the first week’s vaccination slots were filled in 25 minutes, for a total of about 25,000 doses. In Tokyo, according to national broadcaster NHK, 90 percent of the spots had been filled by the end of the 2nd day, May 18.

In Osaka, the government is aiming to vaccinate 2,500 people per day, then increase up to a maximum of 5,000 per day. The capital city Tokyo is set to start with a goal of double that, or 5,000 vaccinations a day, and then move up to a maximum of 10,000 in the coming weeks.

Both locations are starting with the target of vaccinating over-65s living within their own metropolitan area, and then they plan on extending the invitation to residents of neighboring prefectures. Starting from May 31, the Tokyo venue will expand the pool of eligible seniors to include Kanagawa, Saitama and Chiba prefectures, whereas the Osaka venue will grow to include residents of Hyogo and Kyoto prefectures.

Although hold ups were not apparent on the day the sign-ups at the mass vaccination sites started, bumps along the road are still possible.

Data security has also been a concern. To avoid the leak of personal information, the Ministry of Defense website has not been linked with the databases of the local governments, as Minister of Defense Nobuo Kishi explained in a statement on May 18.

This has meant no practical way of cross-checking whether registration numbers are accurate, leaving the possibility for wrong numbers to be input. It could lead to glitches when people whose data is improperly entered show up at the vaccination centers.

To address this and related data issues, the government announced on May 18 that it is adjusting the software so that people with a birthday under the age of 65 cannot sign up for vaccinations. Minister Kishi has also appealed to citizens to double check that the information they input is correct before showing up at the vaccination centers, so as to avoid holdups in receiving the vaccine or wasting vaccine doses.

In addition, not connecting the software framework to the local government databases has also meant that medical staff at the mass vaccinations venues will not be able to verify whether patients who show up have already received a jab of the vaccine.

Mass vaccinations are set to continue for three months at the designated locations.

The JSDF mass vaccination sites will be using the Moderna vaccine.

Currently, only the Pfizer vaccine has been approved for use in Japan, although the AstraZeneca and Moderna vaccines are set to be added later this month. Moderna’s approval date is expected to be on May 21, ahead of the opening of the mass vaccination sites on May 24.

“Some local governments have said they will begin their campaigns this month, and we would like to provide as much support as we can”, said Kono on May 18, making it clear that the government initiative will not stop at the mass vaccination sites in the cities of Tokyo and Osaka.

Proposals are under consideration to add vaccination centers in 30 other prefectures, out of a total of 47 in Japan, to speed up the rollout.

The government is also taking steps to expand the pool of people who can give vaccine inoculations, after many local governments voiced concern that the lack of medical staff was a major impediment in organizing the vaccine rollout.

To help with this effort, Taro Kono announced on May 18 that “The government would consider using the help of pharmacists to administer the vaccines.”

The government had previously approved a rule change to allow dentists to give vaccine inoculations. On May 18 in a meeting between Kenro Hori, head of the Japan Dental Association, and Prime Minister Yoshihide Suga, it became clear that about 14 prefectures have enlisted the help of dentists with vaccinations.

In addition, family doctors are also taking more of a leading role in the vaccine rollout. The advantage of family doctors is that they are in a better position to reach a portion of the over-65 population, and they have prior knowledge of any pre-existing conditions of their patients.

To smooth the cooperation of family doctors, the Tokyo Metropolitan Government announced on May 17 that it is setting up a compensation scheme for family doctors and small clinics who focus on administering the vaccines. For example, the plan would pay to ￥175,000 JPY (about $1,600 USD) per day for clinics that inoculate more than 60 vaccines per day.

Tokyo Governor Yuriko Koike commented on the matter, saying: “The Tokyo Metropolitan Government will pay a separate remuneration to help finish vaccinations of the over-65s by the end of July. That way, we can secure enough medical staff through doctors and clinics participating in the rollout.”