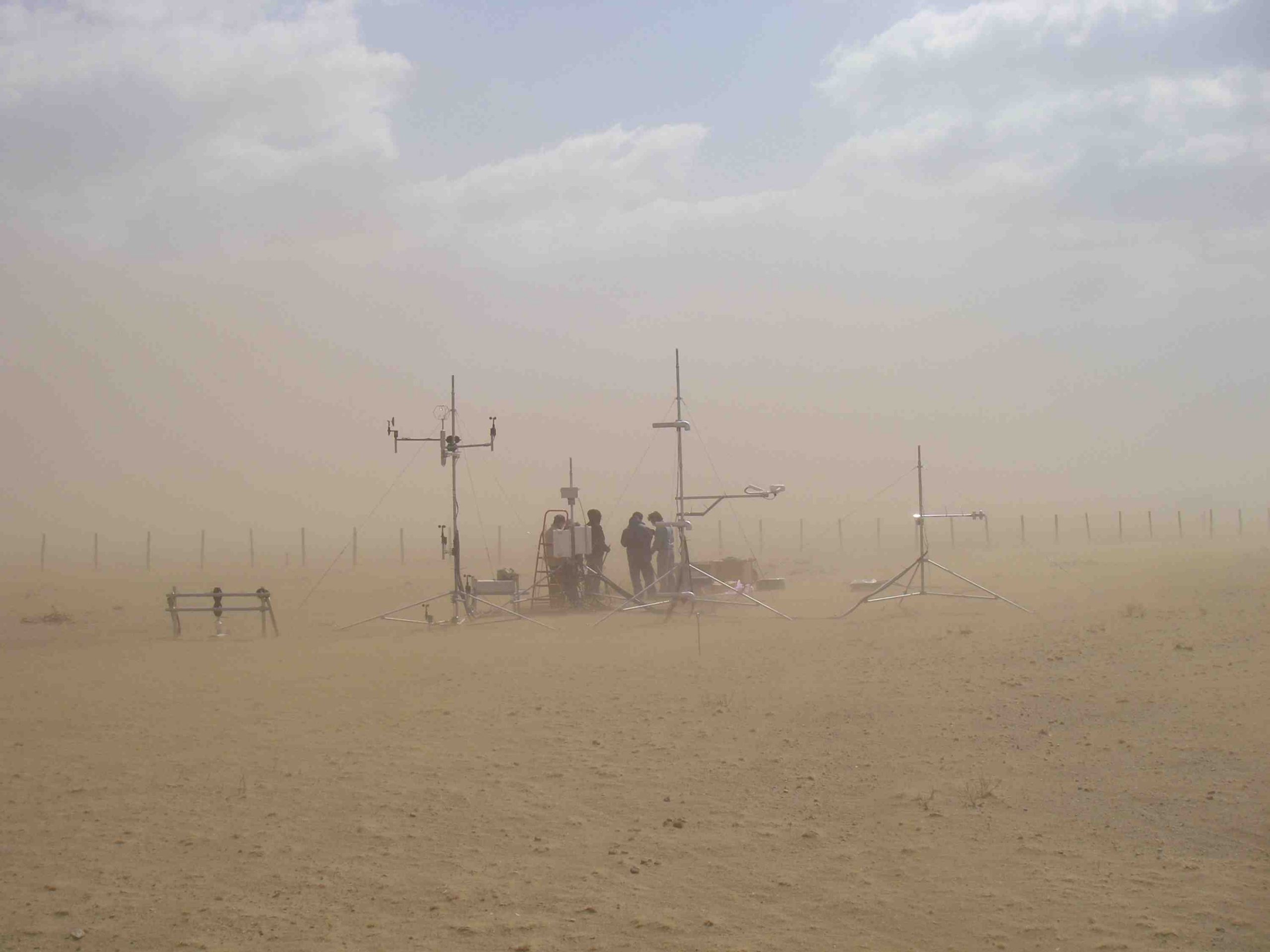 What food crops will survive the temperature changes coming with global warming? Can humans adapt to the backbreaking agricultural tasks accompanying these changes? Can local populations and neighboring countries protect people from the toxic sands borne on windstorms from desertifying regions?

These timely and momentous issues have been the focus of research at one insightful Japanese university in Western Japan’s Tottori Prefecture. A panel exhibition commemorating the 30th anniversary of the Tottori University Arid Land Research Center (ALRC) was held at the Tottori Sand Dunes Visitor Center on March 14, showcasing some of its contributions to society.

Among the exhibits of the commemoration, the most impressive was a heat-resistant variety of wheat developed by the ALRC as a means of fighting high temperatures and drought.

Used to make bread and noodles, wheat is a crop typically grown in arid areas. Global expectations are high for the development of improved varieties that can grow under harsh conditions, in preparation for global climate change.

Cultivation trials are underway in Sudan, the world’s hottest wheat-producing region. The results of fieldwork in Sudan are brought back to ALRC to be analyzed, then hybridization and simulations are carried out to make improvements. After this, cultivation is again begun in Sudan. This process is repeated as taste and yield are improved.

Director of ALRC, Professor Norikazu Yamanaka, speaks proudly of the facility: “Our research on adapting wheat to climate change is among the best in the world.”


Only Research Institute of Its Kind in Japan

Applied research in practical science has been the basis of the facility’s research throughout the nearly 100-year history of the ALRC and its predecessor institutions. It began as the Agricultural University of Tottori’s Kozan Dune Test Site established in 1923, then transformed into the Tottori University Sand Dune Research Institute in 1958, and finally became the ALRC in 1990.

Research results are channeled to practical solutions in the field. These have included “sand dune anchoring technology” that combines sand fences and tree planting, and innovative “sprinkler irrigation” that eliminates the need for “bride killing” watering work that used to be done by balancing buckets on both ends of a carrying pole.

Solutions have also included specialty products that can be grown in sandy areas, such as scallions, which are still produced today, and greening projects in China’s deserts.

ALRC’s distinctive buildings — the Arid Dome, reminiscent of a space station, the Arid Lab, a red cylindrical building that looks like a baseball stadium — stand surrounded by lush greenery, in stark contrast to the neighboring tourist attraction section of the Tottori Sand Dunes.

“We planted the trees on an empty sand dune, but the sand control was too effective and later we had to cut down some of the trees. When I tell this story to international students, they laugh at me,” says Dr. Yamanaka. The site itself is a major research achievement.

The 30th anniversary edition of the ALRC’s journal points out, “The roots of the ALRC’s work is dune research, with the Tottori Sand Dunes as the setting.” And it is dune research that is the starting point for the ALRC’s current work, which focuses on desertification, the food crisis, and yellow sand, including irrigation and greening.

Based on know-how cultivated throughout its history, the facility engages in advanced research and responds to modern issues, supported by the state-of-the-art equipment in its dome and laboratory, which can artificially create and simulate temperature, humidity, light, and other various conditions of arid regions.

ALRC, the only research center on drylands in Japan, is also an institution where universities and research institutes from all over the country can share and conduct joint research.

The three research divisions, including one for comprehensive desertification countermeasures, have about 50 faculty members and students. Roughly half of these are foreigners from Asia and Africa.

Drylands are defined as land where the amount of water that evaporates is greater than the amount of precipitation. They account for 41% of the Earth’s land and are home to more than 2 billion people, nearly 35% of the world’s population.

Desertification is a phenomenon by which drylands are degraded by weather, such as wind and rain, and by human activities such as land clearing for cultivation, livestock grazing, and logging. At present, desertification is reportedly occurring in 10-20% of drylands.

There is concern that the occurrence of yellow sand caused by sandstorms in Mongolia and China will increase due to desertification.

There are growing concerns that yellow sand caused by dust storms in China and Mongolia will increase due to desertification. In Mongolia, a “dust storm early warning system,” which utilizes the research outcomes of the ALRC, has been put to practical use for such purposes as evacuating grazing livestock and warning airplane operators.

Analysis of yellow sand and other air pollutants that drift to Japan reveals the characteristics of this pollution, including blackish substances arising from winter use of heating equipment in China. Elucidation of the route of wind-blown sand is also progressing. The facility intends to apply its research results to the prevention of allergies and other health hazards.

A Member of the International Community

Some have raised doubts about the use of taxpayer money for the ALRC’s research because Japan, with its abundant rainfall, is not arid. However, Dr. Yamanaka believes that the value of an organization lies in its ability to produce research results that are useful to society.

“There is a direct link between drylands and Japanese kitchens, where imported wheat and soybeans, both dryland crops, are used,” explains Dr. Yamanaka. “In addition, the effects of desertification, as represented by yellow sand, are directly impacting Japan. Addressing the problem of drylands is a role Japan should play as a member of the international community.”

In its research on heat-resistant wheat, for example, the ALRC carries out simulations on growing improved wheat varieties under even more severe conditions, such as a five-degree temperature rise. It directly responds to global issues such as global warming and climate change, as well as concerns about a future food crisis.

ABOUT THE ARID LAND RESEARCH CENTER:

The Tottori University Arid Land Research Center (ALRC) is a part of Tottori University, a national university located in the Western Japan prefecture of Tottori. Located in the Tottori Sand Dunes, it just celebrated its 30th anniversary in conducting research on the prevention of global desertification. Its roots (from 1923) lie in the Sand Dune Research Institute of the Faculty of Agriculture of Tottori University. The facility has long contributed to the development of sand dune agriculture in Japan, and, in recent years, has expanded globally, producing research results on the development of high temperature-resistant wheat and the prediction of dust storms linked to yellow sand pollution.