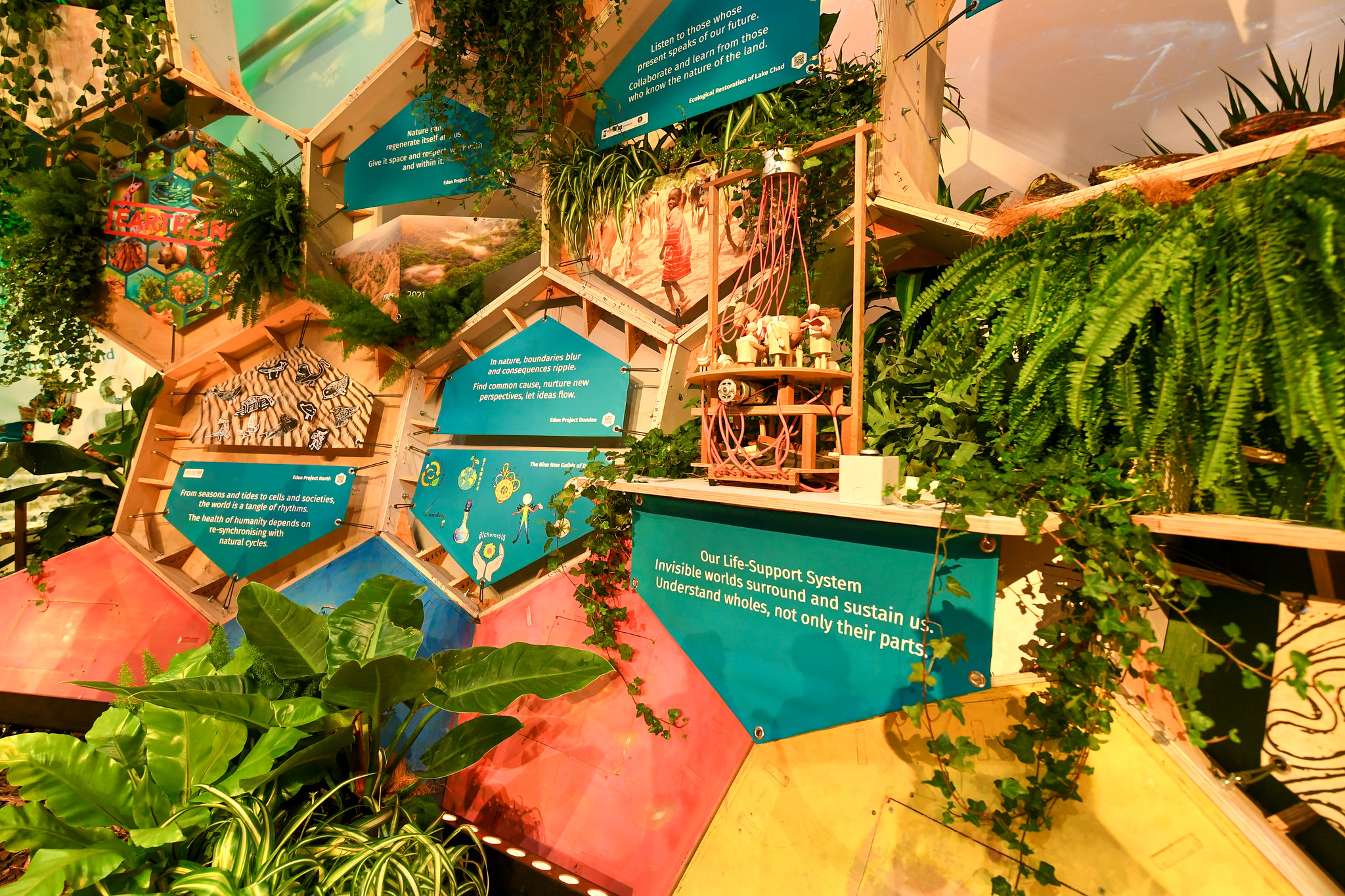 Pavilions and displays in Glasgow at COP26.

The Glasgow Climate Pact reached at the end of the COP26 Climate Change Conference on November 13 brought countries to a historic agreement on several steps to tackle global warming. Most prominent among them was the agreement on the goal of keeping the rise of temperatures globally to less than 1.5 degrees Celsius compared to pre-industrial times.

Naomi Inoue, the official in charge of Tokyo’s COP26 Japan Pavilion, said of the Japanese climate change technologies on offer in Glasgow, “We want to show the technologies that Japan can be proud of.”

In two parts, JAPAN Forward is taking a look at some of the emerging technologies Japan is developing to contribute to achieving this COP target and others.

In the first part of this series we introduced some of the hydrogen and other renewable energy technologies Japanese companies are making available both in the transition and for the long-term achievement of net-zero carbon emissions by 2050. Here, we turn to another type of technology Japan showcased in Glasgow: the use of artificial intelligence (AI).

Many of us have wondered: What if AI could help solve the world’s big social questions? It turns out some people in Japan are trying to find out.

In 2017, Hitachi teamed up with Kyoto University to use artificial intelligence to crunch more than 20,000 scenarios for a prosperous, sustainable society in Japan 20 or 30 years from now.

The scheme considered societal problems, such as the declining birth rate, and tried to find policies that would benefit people decades from now. The results culminated in a set of recommendations, which were submitted to local governments.

Nagano prefecture in particular was one of 10 localities that declared it would actively consider proposals using AI going forward. It even created simulations for the introduction of the Maglev Shinkansen in the region.

There are many possible applications, such as in the fields of medicine and education, to mention two.

Kazuhiro Ikegaya, lead designer at the Environment Project, Hitachi Certified Design Thinking Initiative, shared with JAPAN Forward that their aim is now to focus on environmental solutions in the field of energy, EV, and so on. In fact, Hitachi was an official partner of COP26.

Ikegaya explained the project’s rationale: “Policy makers might have issues gathering consensus. We want to make it easier to discuss future environmental measures among the stakeholders by providing simulation results.”

Explaining why companies should trust Hitachi with this kind of technology, he added: “I think Hitachi’s strength is combining the AI with complicated computing technology we cultivate from the infrastructure business. For example, we provide systems for the weather forecast in Japan.”

Ikegaya reflected that, back in 2017, when the AI recommendations were shared with policymakers, the key recommendation was to disburse population centers away from the big cities in order to achieve a revitalized, sustainable future for Japan.

Ikegaya reflected on the timeliness of the forecast in the context of people moving away from large metropolises during the pandemic: “AI kind of forecast what would happen in that sense!”

Another application of AI to provide concrete help in environmental problems was presented by IHI and Sumitomo Forestry Group. The project is called NeXT Forest.

Most people agree that protecting forests is key in the aim of being carbon neutral by 2050. Tropical forests and peatlands are great absorbers for carbon dioxide.

Conversely, negligence of these areas can lead to large amounts of CO2 stored in the soil being released into the atmosphere.

According to the NeXT Forests website, tropical peatlands store a vast amount of carbon ー equivalent to over 10 times global emissions ー although its proportion of the global land area is only 0.4%.

In addition, peatlands, more than other types of land, have a high risk of wildfires should they not retain enough moisture.

NeXT Forests is a project which aims to actively protect tropical forests and peatlands. One way to do it is through AI.

Data is collected by earth observation and a weather monitoring system (sPOTEKA, developed by IHI), which is analyzed by AI.

The data on how much water is coming from rain or nearby river dams is then processed, and measures are taken to make sure the peatland has a constant flow of water and doesn’t dry up.

The one-of-a-kind system is a “high density and remote weather station in Japan” which acts as an integrated monitoring system that uses AI to collect and analyze data and feed the results back to managers and policymakers. The project is currently being used in Indonesia.

Kento Tomiyama, who works at IHI and was representing NeXT Forests at the Japan Pavilion at COP26, stressed the importance of this type of technology. “Indonesia has a huge peatland, and we have been there for over 10 years,” he explained. “But there are peatlands in Congo in Africa, Scotland, the Amazon in Brazil. We need to expand [the use of] this technology around the world.”

Within the same project, Sumitomo Forestry Group has invested in satellite technology, which allows for forest monitoring, checking the health of forests, and how much CO2 is being absorbed in the atmosphere.

Finally, the IHI employee stressed the importance of investing in companies pursuing such initiatives in order to make them economically viable.

“There are many NGOs that are trying to do this, but they can’t because it’s a new technology. Once the NGO has used all their money, the project stops,” said Tomiyama. “Companies need to invest in, and also make [their work] sustainable for the environment.”