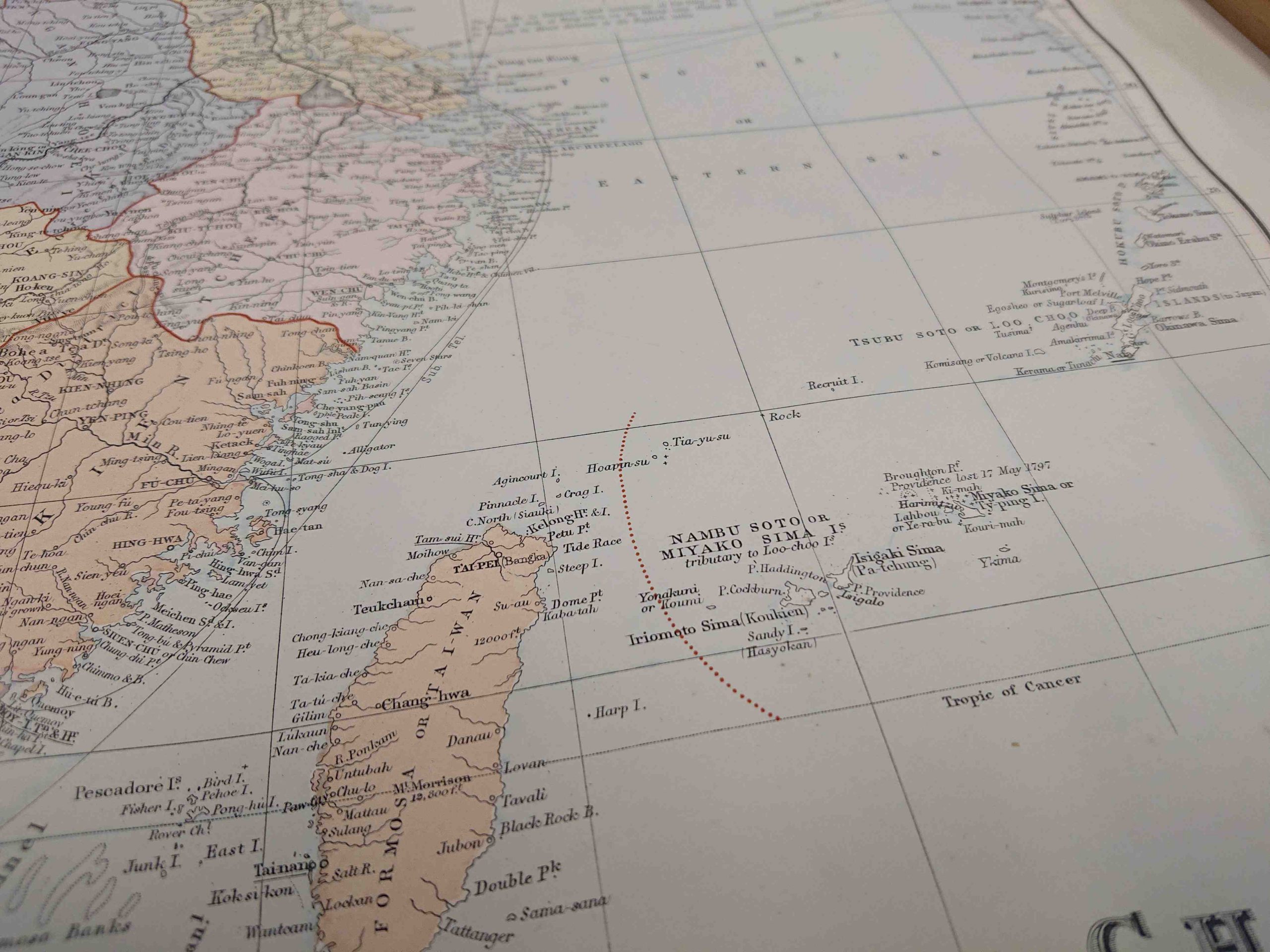 The Japanese government is considering how to publicize mid-19th century British and German maps reconfirming the Senkaku Islands as Japanese territory, it was learned on December 15, 2020.

Both maps in question clearly show the demarcation line for Japanese sovereignty lying between the Senkakus and Taiwan. They predate the formal establishment of administrative ownership as Japanese territory in 1895.

The maps in question are one map contained in the London Atlas published by Stanfords Map Shop (London) in 1887, and a map of China, Korea and Japan in the Handatlas published by the German firm Stielers (named after Adolf Stieler) in 1875. Both show the boundary line for Japanese territory/territorial waters to the west of the Senkakus chain.

Copies of the London Atlas have already been known to exist in the National Library of Australia and other locations. This is the first time that an original copy was confirmed to exist in Japan.

In January 1895, after a decade-long survey, the Meiji government determined that neither the Qing Empire (China) nor any other country exercised control over the Senkaku island group, and by Cabinet decision incorporated the area into Okinawa Prefecture.

The Chinese government contends that Japan annexed the Senkaku Islands (Diaoyutai in Chinese) along with Taiwan as a result of the Treaty of Shimonoseki (Maguan Tiaoyue in Chinese). Thus, when Taiwan reverted to China at the end of World War II, so did the Senkaku Islands. However, the British and German maps disprove the Chinese assertion that the islands had been controlled by the province of Taiwan under the Qing.

Great Britain was the preeminent naval power during the 19th century, and maps contained in the London Atlas and other British sources based on up-to-date information from the countries concerned were considered comparatively trustworthy in terms of things like contemporary territorial control.

Kensuke Nagase, Director of Research Coordination at the public interest incorporated foundation Japan Institute of International Affairs (JIIA), has been researching territorial issues. He says, “This is a particularly valuable map since it shows that even prior to formal incorporation, Europe had recognized the Senkaku Islands as being Japanese territory.”

Nozomu Ishii, an associate professor at Junshin Catholic University in Nagasaki who is an expert on the history of the Senkaku Islands, believes “the maps reflect the most up-to-date information the compilers could get from East Asia at that time.”

The two maps in question belonged to Wataru Takada, the private secretary of Liberal-Democratic Diet member and former Minister for the Environment Yoshiaki Harada. Takada purchased the maps from a British vintage map shop about five years ago. In order that the maps might be put to the most effective use on December 15, Takada donated them to the JIIA.

The Cabinet’s Office of Planning and Coordination on Territory and Sovereignty has borrowed replicas of the maps from the JIIA.

It is now considering putting them on display at the National Museum of Territory and Sovereignty in the Kasumigaseki area of Tokyo, as well as on the museum’s webpage. The Museum has a large collection of reference materials related to territorial issues involving the Senkaku Islands, Takeshima and the Northern Territories.