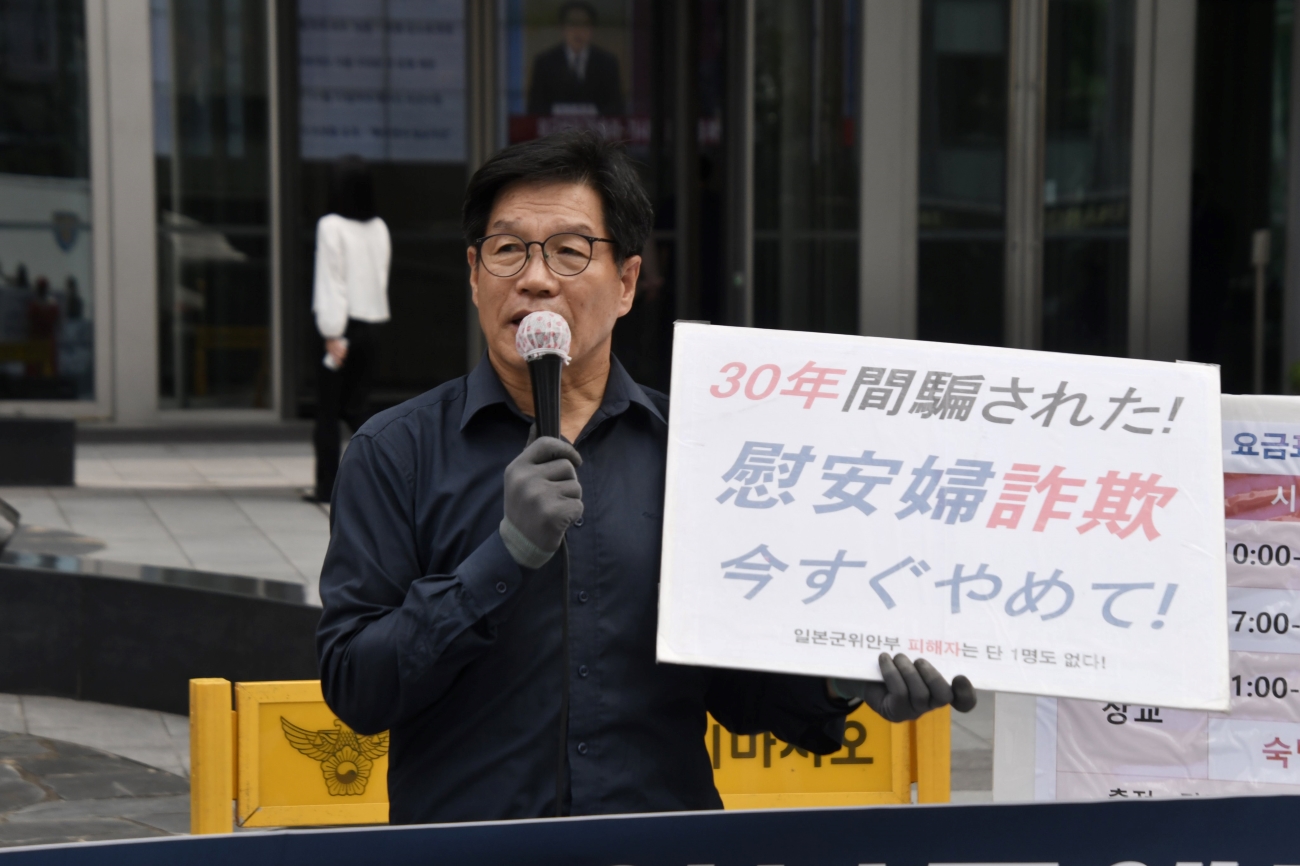 Kim Byungheon protests the comfort women statue (aka statue of peace) in front of the former Japanese Embassy in South Korea. (© Kim Byungheon)

"South Korea's (Korea) K-12 history textbooks are littered with history distortion and fabrications," said Kim Byungheon, who's scheduled to speak at the Japan-Korea Comfort Women Symposium in Tokyo on November 16. He elaborated in an interview with JAPAN Forward.

About 80% of the narratives on modern history, mainly after the Japan–Korea Treaty of 1876, are thoroughly erroneous, he explains.

As director of the Korean History Textbook Research Institute, Kim has researched and critiqued textbook issues for many years. He believes the fallacious history lessons stoke anti-Japan sentiment among the younger generation and hamper bilateral ties between Tokyo and Seoul.

"Shared historical understanding between the two states is the key to peace and prosperity," says Kim.

What are the problems associated with Korean history textbooks?

K-12 history textbooks in Korea are pervaded with distortions and fabrications. In particular, most of the descriptions of Japan's colonization of the Korean Peninsula are manufactured history.

Students educated with these biased narratives naturally develop hostility toward contemporary Japan and the Japanese people.

Are there any ways to improve the situation?

I have publicly voiced my concerns over this situation for many years. My preferred method is to utilize a government system called the Textbook Complaint Processing Center.

It's a system operated by the Ministry of Education and the Korea Textbook Education Foundation, whereby anyone can propose improvements to published history textbooks. When the institution determines that there is, in fact, an error, corrections are made.

Any success so far?

There are three major accomplishments:

One, in describing the Rice Production Program that began in 1920, high school textbooks often used the term "seizure." In short, it meant the Japanese colonizers stole Korean rice without permission.

However, upon my complaint, all but one textbook corrected it to either "carry out" or "export." Among them, Visang company applied the term "shipped out." Since Korea was a Japanese colony, tariffs were virtually eliminated in trade. Thus, "shipped in" and "shipped out" used by that company are academically precise terms.

Second, at one-point, elementary school's history textbooks contained a question page asking, "Explain why the Treaty of Ganghwa Island was unequal?" This time, I filed a complaint to the aforementioned government center and directly to the textbook author.

I asked the author to "explain to me what part of the treaty was unequal and how to amend it for fairness." The page has since been deleted.

Lastly, I pointed out that an elementary school's social textbook published an incorrect image along with the following description: "Our people (Koreans) who were forcibly conscripted as laborers."

The photo was actually taken in September 1926 when the Asahikawa Shimbun in Hokkaido reported a fatal accident at a road construction site. So, it has nothing to do with Korean laborers under Japanese rule. The photo was removed upon my complaint.

The book, "Red Wednesday: Comfort Women Activism and 30 Years of Lies" was recently translated into Japanese. What is it about?

First, I point out that the comfort women issue is also part of the "history distortion" in Korea. The core of this book is to uncover lies proliferated by the Ministry of Gender Equality and Family and the Korean Council.

Because the Korean Council has been lying for the past 30 years, the book became longer than expected (400 pages).

How is it different from previous studies?

This book focuses on the comfort women distortions within Korea.

In particular, I exposed the contradiction of the "Victims of Japanese Military Comfort Woman Act." Article 2.1 of this law defines "the victim of Japanese military comfort women" as "victims who were forcibly mobilized and sexually abused by Japanese colonial power and coerced to serve as comfort women."

The Japan-Korea Symposium on Comfort Women will be held on November 16 in Tokyo. What are your expectations?

First and foremost, the comfort women issue should not even be taught to K-12 students. The subject is more appropriate for mature adults, not children.

In my opinion, continuing to teach children about how young Koreans were raped or sexually enslaved by the Japanese military constitutes "child abuse." Likewise, continuing to use the former comfort women as a political weapon is tantamount to a "human rights violation." Is it not?

I plan to iterate these positions during the symposium. And I hope to find new ways to approach this issue with Japan.

What are your future plans and goals?

Starting next year, I'll be more active in conducting opposition demonstrations in Korea. Protests are expected in front of every comfort women statue (about 150) installed on the Peninsula.

By next year (2023), I also desire to utterly thwart the Korean Council's Wednesday protest. In the long run, of course, removing all comfort women narratives from the textbooks in Korea and Japan will be pertinent.

About the November 16 Event

For additional information: Contact the International Research Institute of Controversial Histories (irich.org) by email to  info@i-rich.org, Telephone: 03-6912-0047 or Fax:03-6912-0048.