The Comfort Women Issue: Is Ikuhiko Hata's Masterpiece a Catalyst for Paradigm Shift? 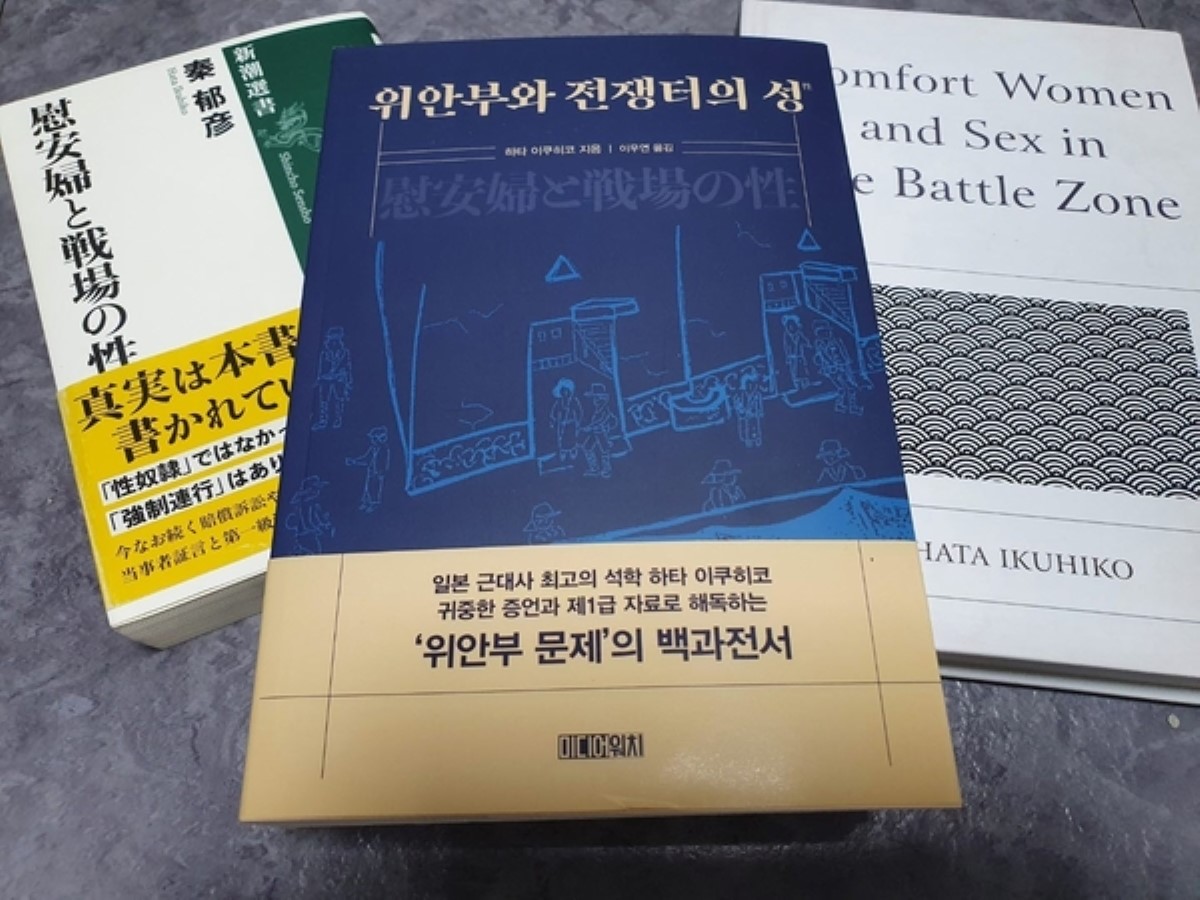 Historian and author Ikuhiko Hata's book on the comfort women is in Japanese, Korean, and English from left to right. (© MediaWatch)

Ikuhiko Hata's pioneering work, Comfort Women and Sex in the Battle Zone (Hamilton Books/Rowman, 2018) was recently translated into Korean. It is now available in bookstores across South Korea (Korea). First published in Japanese by Shinchōsha in 1999, and then in English in 2018, it took 23 years to reach the Korean audience.

Hata is considered an authority on modern Japanese history, and his books — including this one on the incendiary topic of comfort women — are invariably lauded for their impartial, empirical, and scrupulous research.

The publication is timely and bears profound implications for Korean intellectuals as discourse on comfort women has stagnated for decades. Despite the voluminous study, no scholarly consensus has been reached on the number of women involved, and even the precise definition is highly disputed. For instance, scholars like Hata estimate 20,000 women in total (mostly Japanese), while the Korean textbook and mainstream academe increase that number tenfold.

Central to the argument is whether the Japanese Imperial Army forcibly dragooned and sexually enslaved women in its erstwhile colony, Chosun, which the contemporary Koreans uphold. The Japanese government has consistently rebuked such allegations, though the (in)famous Kono Statement in 1993 tacitly acknowledged the occasionally coercive nature of the recruitment.

Amid such disagreements, the "abduction" and "sex slave" narrative (heretofore the dominant theory), which emerged in Japan in the early 90s, gradually cemented in Korea. The tale's origin dates back to 1992 when Japan's leading newspaper, Asahi Shimbun, sensationalized a fictitious story by Seiji Yoshida, an Imperial Japanese Army (IJA) veteran, who claimed to have hunted women in Jeju Island and imprisoned them in military-run brothels during WWII. This, along with alleged former comfort woman Kim Hak-sun's public testimony given the year before, molded a paradigm for stigmatizing Japan as a war crime state.

Facts Aside, Activists Take Over

Hata, whose profession spans over five decades, has lived through parts of this history and knows it inside and out. In fact, he was one of the first academics to scrutinize Yoshida's accounts and visited Jeju Island to investigate the facts. Upon interviewing native residents and consulting a plethora of archives, he declared Yoshida a professional con artist and cautioned the public on the former soldier's series of deceptive memoirs, originally released in 1977.

Regrettably, the damage was irreversible by the time Yoshida admitted to his fabrication in 1996. Soon after the Asahi Shimbun's inaccurate coverage, "anti-Japan" activists from Japan and Korea, including some intellectuals and lawyers, collaboratively fostered the dominant theory and pressed the Japanese government for atonement.

Despite apologies by then Prime Minister Kiichi Miyazawa and Japan's attempts to compensate former comfort women financially, the activists didn't subside. They further decried that the Japanese government ignored comfort women's kidnapping and sexual enslavement, and this time urged the international community to denounce the nation's wartime misdeeds.

In 1996, the United Nations Human Rights Commission (UNHRC), responding to these outcries, appointed a rapporteur to probe the comfort women issue as part of a project exploring violence against women.

Tasked with the assignment, Radhika Coomaraswamy, a Sri Lankan lawyer with inadequate knowledge of East Asian history, visited Japan for field research. There she interviewed two authorities on this matter, one Hata and the other Yoshiaki Yoshimi, a professor at Chuo University and staunch advocate of the dominant theory.

Examining the final report, Hata was utterly stunned that Coomaraswamy had, occasionally deliberately so, mischaracterized and misquoted his statements. Through the help of the Japanese Ministry of Foreign Affairs, he immediately dispatched letters to her and the UNHRC for revision, but they did not comply.

Chapter 9 of the book details these flaws, some so grave that the author renders it completely hopeless. "The report is so substandard that if it were a college paper submitted at a top Western university, it would receive an F grade," writes Hata. Even left-leaning intellectuals like Yoshimi and Haruki Wada, who align with prevailing sentiments in Korea, agree that the report contains numerous fundamental errors.

Despite Yoshida's admission of duplicity and Asahi Shimbun's retraction of 18 articles starring his fallacious sagas, the conventional wisdom in Korea stuck around. Based chiefly on the testimonials of former comfort women, most Koreans indubitably argue that the Imperial Japanese Army abducted hundreds of thousands of Chosun women and forced them into sex slaves at an institutionalized bordello.

In light of this perception gap, Hata's newly translated book will be a catalyst for rejuvenating the dormant dialogue. For a layperson, the book may trigger a shock and awe reaction as it contradicts much of Korea's traditional understanding on the comfort women issue.

Notably, Hata argues that the comfort women system was an extension of state-sanctioned prostitution that existed before the outbreak of the Pacific War and an ubiquitous wartime phenomenon throughout human history (chapters 2, 5). Concerning the dominant theory, he finds the allegations generally unsubstantiated. Women were often employed under fixed contracts at comfort stations operated by civilian owners (chapters 2-4, 6, 12).

Moreover, aside from isolated incidents in the Philippines and Dutch East Indies (both occupied territories and not part of Japan), Hata finds no objective evidence pointing to Japanese soldiers' mass abduction of Chosun women ー or that the military officials made corresponding orders (chapters 6, 12).

"As all village elders and most of the policemen were Korean, they would have acted as a brake on any attempt at extreme forms of 'forced abduction'…," writes Hata. "In any event, if it was possible to recruit women using the same methods of human trafficking that prevailed during normal times, the officials would have had no reason to attempt 'forced abduction,' which carried the risk of causing the entire colonial rule to collapse," he also notes.

Make no mistake, though. The author and historian does recognize that not all comfort women served voluntarily as some were coerced and swindled by brokers.

After digesting 588 pages of extensive survey, Korean readers will soon realize that the author conveys his thoughts as unprejudiced as possible. As an unvarnished researcher, Hata acknowledges that many Chosun women were indeed victims of severe poverty. And this event is in no way by any stretch of the imagination a proud history of modern Japan.

For academics familiar with Hata's work, this would be a refresher course to sharpen their existing knowledge. While major follow-up studies have been published since Hata's book (Tsutomu Nishioka, Lee Young-hoon, J Mark Ramseyer, to list a few), many intellectuals concede that he was the first to provide a robust theoretical background for dissenting against the orthodox wisdom in Korea.

Truly admirable is the author's courage to tackle this issue before the turn of the century, when the balance had increasingly tipped in favor of anti-Japan rhetoric.

If there is any regret, it's the belated translation of such a classic piece. Had it been released earlier, it could have limited the proliferation of the dominant theory and its adverse consequences. The fact that it took over two decades, in much respect, exposes the problem of selective censorship and the lack of viewpoint diversity in Korean society.

Frankly, if it weren't for the boldness of Hwang Uiwon, this book may have never seen the light of day in the Korean Peninsula. As editor-in-chief of MediaWatch, Hwang also runs a publishing house noted for printing controversial books on significant historical events.

Other Translations through MediaWatch

Over the past years, MediaWatch has released two other translations on the comfort women issue and another on the forced labor issue by Tsutomu Nishioka, a renowned area studies specialist in Japan. Nishioka has also been credited as first to question the veracity of Kim Hak-sun's testimony by identifying factual inconsistencies.

Hwang's efforts are remarkable, given that politically incorrect publications in Korea can get you into serious trouble, often with a hefty price. The case of Park Yuha, a professor at Sejong University facing ongoing criminal prosecution for writing a hot-button book, Comfort Women of the Empire, readily exemplifies this point.

More recently, Kim Byungheon, an educator, faced similar legal sanctions for publishing a book that unmasked the alleged lies the Korean government and activists propagated about comfort women. The Seoul High Court handed down a fine of ₩10 million KRW ($7,000 USD) to Park, while Kim's books were banned from bookstores.

Nonetheless, Hwang is defiant and plans to release various types of literature, primarily ones that are unfairly labeled "pro-Japanese" or "ultra-right-wing" by the Korean public and the media. He believes one way to settle post-colonial quarrels between the two states is to elevate intellectual discourse.

That is best done, he believes, via rigorous adherence to the Marketplace of Ideas. And this requires introducing heterodox viewpoints, for which Hwang aspires to usher the way. "As a publisher, refusing to print materials purely for ideological or political motives is tantamount to dereliction of duty," concludes Hwang.

Several academics and pundits have already praised the masterfully translated work. And the Seoul Metropolitan Library recently included Hata's book on its shelves.

Although it's too early to predict, we may be heading very slowly toward a new paradigm shift.