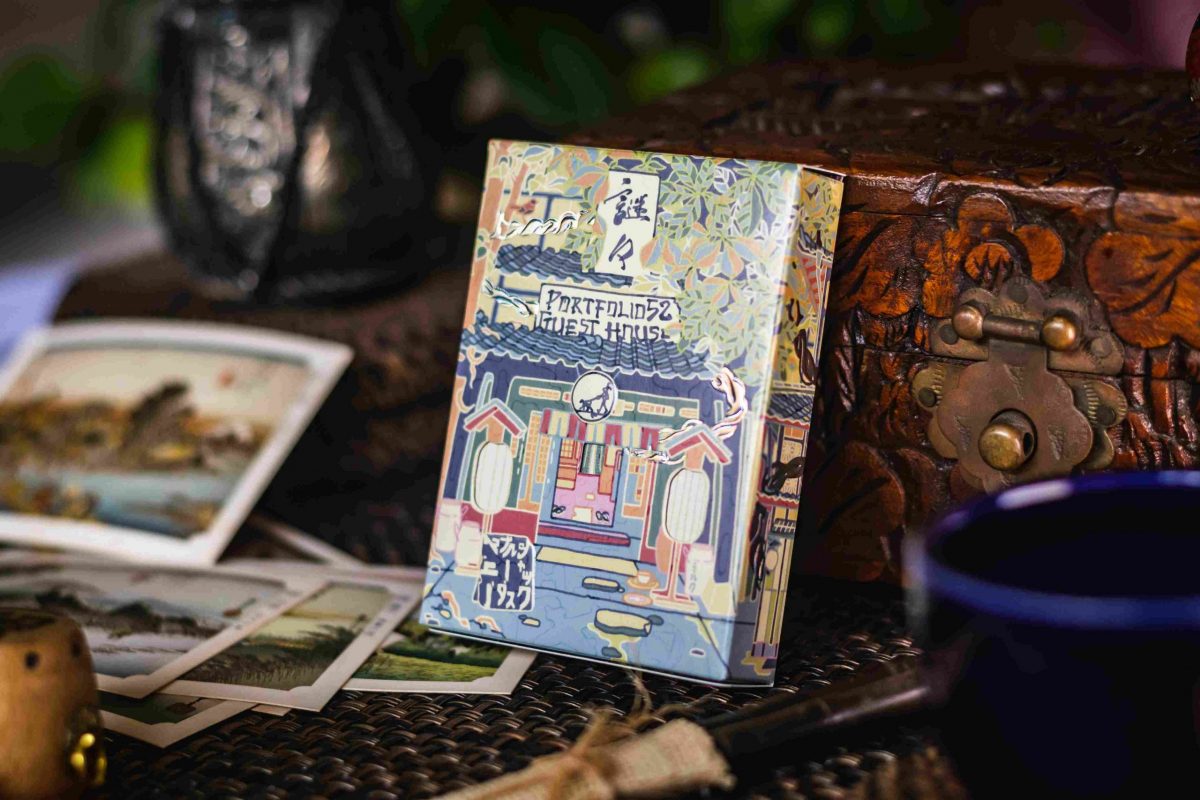 Nazo Nazo Guesthouse Cards are designed by Jack Brutus Penny, and can be supported through a crowdfunding campaign until November 9.

Jack Brutus Penny, 35, is an illustrator and nonsense writer from London, United Kingdom, who lives in Kawasaki. He has a great talent for details, a love of jokes and riddles, and is very fond of animals and environmental issues.

The Nazo Nazo Guesthouse is actually a boxed set of playing cards. Jack has spent the last two years drawing 52 people as cats ー or their real life cats. And he has made a card for each one.

In my case I don’t have a cat, so I have become one. All 52 are guests at the Nazo Nazo Guesthouse, which is a Japanese guest house of the Edo period. The box shows the entrance to the guest house, with typical Japanese tiles, sliding doors and the stones where one removes shoes. There is a lantern on each side and a noren swinging its welcome to the guests.

My room is the 6 of hearts. The guest house is inspired by ukiyo-e, and every surface is filled with delicious details.

The border is a design of sea waves, popular in kimono and other objects since the Edo period. Puzzles are hidden in each card, with such sayings as "Roll up your sleeves" or "Two heads are better than one."

As a kimono influencer I am dressed in my gorgeous kimono, which is layered and long sleeved. The pattern is temari silk balls, appropriate for cats to play with. Surrounding me are mirrors and two small make-up boxes. Mice are playing unnoticed around my feet.

In the next room, the 7 of hearts, is a cat in a more standard kimono with her obi tied and wearing a haori. She has a sewing box next to her, and is sewing the hem of my garment, which trails through to the next room. An amusing touch is the print of Mount Fuji on her wall, which is being gazed at by a small mouse wearing a backpack.

On other cards you can find a shamisen playing cat, a horseback archery cat, and all kinds of other interesting characters. They are various influencers, cultural representatives like myself, and famous cat accounts from social media.

There is also a calligrapher, and a potter staying at the inn. They all seem unaware of the small mice with whom they share the space, and who provide a sub plot with their mice antics. When the cat's away, the mice will play, but even with plenty of cats in residence, the mice are having a good time.

Jack does not draw directly from kimono, but is inspired by ukiyo-e, and the way that kimono in those prints have a life and form of their own. The kimono themselves create form and action.

He is also strongly influenced by Japanese motifs that he finds in the prints. He tries to imagine what kimono each character in his whimsical world may have worn ー and how they would have worn it.

This is actually Jack’s third crowdfunded project. Both his previous projects won design and ethics awards. The first project was a set of luxury playing cards inspired by world history, and the second were art playing cards themed around the sensu folding fan.

Both projects raised much money for Animal Rescue Kansai, the World Wildlife Fund, tree planting initiatives and more. The cards themselves are sustainable, using soy ink and recycled, sustainable paper.

In his current project Jack has created 3 sets of cards that all tell a story together. The first is the guesthouse with its entrance. The second is the tatami room set, which is a cryptic set with even more hidden elements and a story inspired by the Japanese folk tale, Saru Kani Gassen (battle of the monkey and crabs.)

The third is the brilliant onsen set, which is a limited luxury edition set which has foil gilding on it. It hides the children's story of Momotaro as Momoneko.

All three sets continue the Edo inn theme, as if you are walking through the guesthouse to the tatami room etc. And all are available on the kickstarter campaign.

Two complete sets of three will complete the whole building of the inn, with entrances at the front, side and back. One pack would make a delightful and unique gift from Japan, as well as supporting the many organizations to which Jack is committed.

Magical Worlds of Culture and Respect

I asked Jack what inspired him to do this work and he told me that as a child he was fascinated by magical worlds such as Alice in Wonderland and "Spirited Away."

He also wanted to create something magical, whether it was in the form of a book, cards or a piece of fabric. Beyond that, he wanted to make a difference, to help an animal that cannot help itself, and just make the world a better place.

Jack feels that projects like this one also teaches his son to think deeply about culture and respect, and even about small things: to be kind to people and to all creatures great and small.