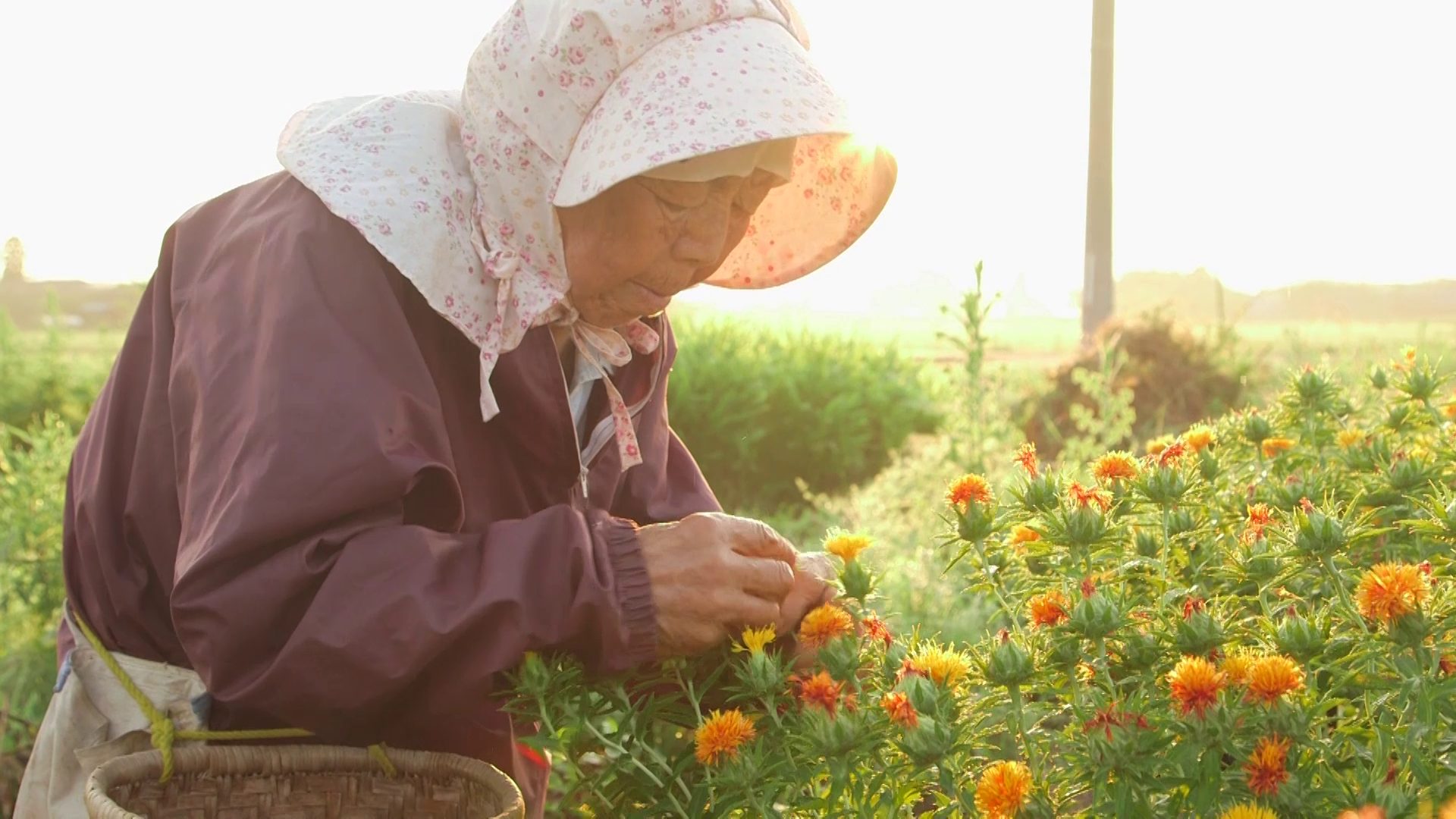 A woman harvesting safflowers to obtain the red dye used in kimono. © Benibana no Moribito.

When I first came to Japan, I was in the habit of going to shrine flea markets to look at old pottery. This was how I first encountered kimono.

There were always rails of bright and beautiful silky garments hanging up. I didn’t even know they were kimono, but I was attracted to the colors and patterns and the luxurious textures of the fabrics.

However, what attracted me more than anything was the incredibly intense red color ー scarlet, but with a little crimson in it ー that was literally the deepest red I had ever seen. The intensity of the color attracted me so much that I bought what I thought was a kimono, in this color.

Later, a friend told me that I had bought a nagajuban, a kimono petticoat. So it is fortunate that I did not wear it outside.


Peeking Through the History

If you look carefully at Edo period (1603-1867) ukiyo-e woodblock prints, you can often see layers of red undergarments peeking out at sleeves and hems. This red cloth has been popular for inner wear for a long time.

Red underwear in Japan is considered to keep one warm and vigorous as it is the color of blood, the sun, and fire. But it is also a holy color for the same reasons. The cloth dyed in this red is called momi. It was used for underwear and also for kimono linings until the mid 20th Century.

The color itself is called kurenai.

At the time I had no idea that this amazingly intense kurenai red was actually a plant dye. It comes from the safflower plant, a member of the thistle family. In Japanese it is called benibana.

It was introduced to Japan around the 3rd century along the silk road, probably from Egypt or the Middle East. In the Heian period (794-1185) it was reserved for high ranking people, and there is a good reason why.

Producing this red cloth is a very labor-intensive business. And the deeper the color, the more of this precious dye is used and the more expensive it becomes.


Going Back to The Roots: Yamagata’s Safflower

The center of the benibana industry in Japan is Yamagata prefecture. It has been produced in the Mogami River area of Yamagata since the Edo period.

My fascination with this color took me to the Kahoku Cho Safflower Museum when I was touring Yamagata by bicycle many years ago.

Fabric dyed in safflower is not very fast. The dye runs when it is wet. As it is also costly to produce, it has been replaced commercially by chemical dyes. However, it is still produced and the safflower is the representative flower of Yamagata.

Safflower dye can also be used for lipstick, which is why lipstick in Japan is called kuchibeni.

When the dye is turned into a paste it is painted onto a small porcelain bowl. As it dries it turns into a lustrous green color. Touching it with a wet brush turns the dye red again.

For those interested in the history of safflower and make-up, the Isehanhonten in Aoyama has a small free museum, and shop where you can purchase real beni lipstick.

‘Benibana no Moribito’: A Film About The History of Safflower Dyeing

Recently I was asked to write a comment for a filmmaker producing a movie about safflower production in Yamagata.

Benibana no Moribito, produced by UTN Entertainment and directed by Sato Koichi, is a documentary that explores the production, history and significance of safflower dyeing there.

The plant is an annual, and the film traces the farming process from planting to harvesting the flowers when they bloom in the summer.

They are picked in the early morning. Neighbors and even school children come to the fields to help to harvest the precious petals for dyeing.

Next the petals are crushed, and soaked and fermented for two or three days before they are washed and shaped into small round patties called benimochi. It’s these small patties that are then used to derive beni products.

Of the color in the flowers, 99% is yellow. Only 1% is red. Fabric or threads can be dyed in a range of colors from pale yellow, through to oranges and pinks, and finally, the beautiful bright red.

In the Edo period, benimochi was the most important product of Yamagata. And they were sold all over Japan. There was a thriving trade with Kyoto from the port of Sakata, where the Mogami river reaches the sea.

The cost and the risk was borne by the farmers in Yamagata, and the journey was long and dangerous. The farmers of Yamagata did not wear the luxurious safflower dyed cloth, and the cities of Kyoto and Edo were where the dyeing skills were developed.

Traders carried the benimochi to the dyers. Among the customers were the Imperial family, nobility, and high-ranking samurai.

In return, ships would bring back to Yamagata beautiful items from Kyoto, including many Kyoto hina dolls and beautiful red kimono, and also goods that were necessary for daily life in Yamagata.

I learned that the technique had almost died out during the Second World War, but some dried seeds were discovered in a barn in Tendo city, and they were able to revive the tradition.

Today there are dyers and weavers in Kyoto and Yamagata who are using natural dyes and are particularly enamoured with benibana.

The dyeing is as laborious as the farming. Moreover, a mordant made from roasted plums that are only produced by one maker in Nara are essential for obtaining the best color.

Benibana no Moribito is showing at Pole Pole cinema in Higashi Nakano, Tokyo, and other cinemas around Japan.