[Kimono Style] Kyoto Jidai Matsuri: A Catwalk of Fashion Through the Ages 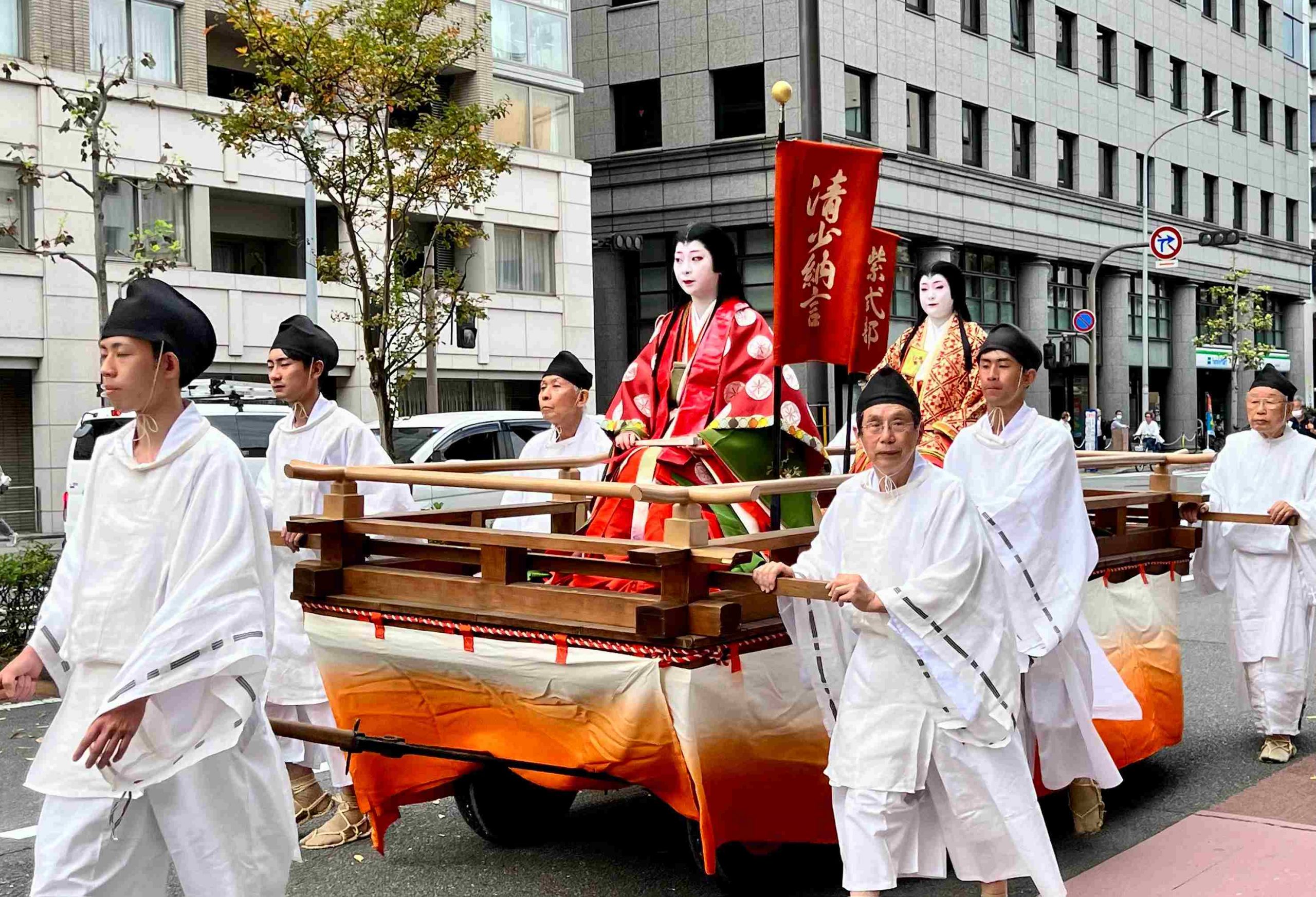 A woman showcasing Junihitoe, the 12-layered kimono at Jidai Matsuri in Kyoto.

Finally this autumn we are seeing some of the popular Japanese festivals being held again, after a break of three years due to COVID-19. Kawagoe held their Jidai Matsuri, or "festival of ages," recently. And on October 22 Kyoto held its own annual Jidai Matsuri.

Although the festival does not have a long history compared to celebrations such as the many centuries-old Gion Matsuri, this festival of ages is one of the three most popular festivals in Kyoto.

Started in 1895, the festival celebrates the founding of Kyoto by Emperor Kammu in 794.

The Parade is the Star of the Jidai Matsuri

The event centers around a long parade with about 2,000 volunteers who are dressed in costumes from throughout Japanese history. The costumes are very authentically reproduced. As a result, it is like looking at history parading before one's eyes.

The parade starts at the Kyoto Imperial Palace, goes south down Karasuma Street, and then turns east on Sanjo. Finally, it enters Heian Shrine, which is the founder and sponsor of the event.

Each neighborhood sends its group of warriors. And many university students also volunteer. The mayor and other dignitaries of Kyoto City ride in a 19th-century carriage at the front of the parade and wear a historical official dress.

Needless to say, a lot of dressers are required on this day. Some of my friends were dressing samurai or other characters for the parade.

Traveling Through the History of Fashion in the Jidai Matsuri

The parade starts with the Meiji era and then gradually goes back in time. The Meiji foot soldiers had leggings and short hakama (Japanese-style trousers). But they carried guns, which were imported from Western countries.

Behind them came the first band of Edo warriors in longer and less colorful hakama. They were followed by famous warriors and some women of the Edo noble class, who would have lived shut up in Edo.

Behind them came the Momoyama and Muromachi periods. During these times the kimono was not worn with an obi. The warrior elite was highly decorated even in these earlier periods.

When the women of lower rank appeared, they were wearing short and loose kimono tied with long, woven ties, and they carried sticks on their heads. They had white cotton head covers. Their simple garments were beautifully tie-dyed in quite striking but less complex patterns than are seen in later period garments.

Towards the end of the parade were the noble women of the Heian period in their junihitoe, literally 12-layered kimono. Some women of earlier periods had garments that were beautifully tie-dyed. Their hairstyles were different from later styles, such as having two high buns or a high stick of a bun in the middle of the head. Their hair was decorated with leaves and their faces were painted white.

Clearly, there were bright and colorful ways to dress, even in ancient Japan.

There were many noble historical figures at the festival. It was not always easy to be sure who was who, but among all the handsomely clad warriors were some notable female characters.

Historically, with numerous clan wars, the famous figures tend to be nobles and warriors. So it was exciting to see the women celebrated.

Representing the early Edo period the founder of kabuki, Izumo no Okuni and her dancers appeared. They were beautifully decked out with white-painted faces and richly dyed and woven garments. Their kosode (kimono) were worn under heavily woven tunics with golden threads in them.

Going back to the middle ages, the famous female warrior Tomoe Gozen, said to be a great archer as well as a swordsman, appeared seated on a white horse. She was dressed in full armor with her naginata and bow and arrows.

My personal heroine, the Heian period writer, Sei Shonagon was riding on a dias with her contemporary, another famous writer, Murasaki Shikibu. Lady Murasaki is credited with authoring the world's first novel, The Tale of Genji.

Jidai Matsuri's Transportation Too Dressed to its Finest

Various means of transport were also on display. The horses had bright tassels and braids, and elaborately made saddles.

An ox had horns decorated with red threads and a huge rope knotted on its head. Behind it came the gosho guruma, an ox cart for nobles to ride in. It was also beautifully decorated and covered with straw screens to hide the occupants from view.

A black lacquered palanquin was also on display. It was richly decorated with gold leaf and metalwork. It was fit for a noble to ride, but must have been a tight squeeze and even empty must have weighed a considerable amount.

The festival is a sight for textile lovers' eyes. Even the cotton leggings of the lower classes had stencil-dyed patterns on them. And the upper-ranking people had gorgeously decorated outfits.

Armour, helmets, and headdresses were highly elaborate and showed the skills of the craftsmen who produced them. Men were as colorful and highly decorated as women.

Braiding, stencil, and tie-dyeing, weaving and brocades, splendid armor and decorations: Japan's colorful clothing history could all be seen in one day!