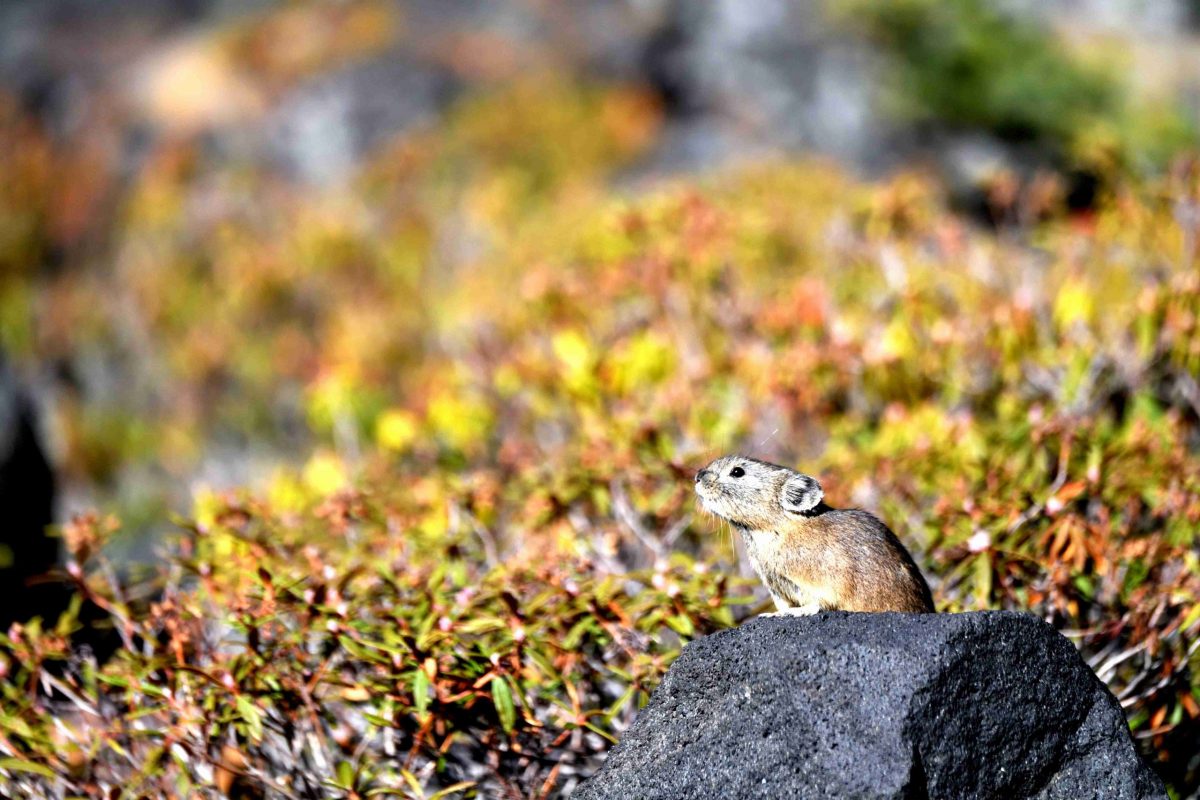 Appearing on the rocks at the foot of Mt Tokachi, Northern Pika can only live in a limited climate like this cool rocky environment (© Sankei by Kazuya Kamogawa)

A high-pitched cry echoes across the rocky mountain. The Sankei Shimbun photojournalist hastily raises his camera, but nothing stirs. Over and over again, this scene has repeated itself since early in the morning. Meanwhile, volcanic smoke rises into the blue sky from Mount Tokachi, an active volcano located in Daisetsuzan National Park, in Hokkaido.

The cry was that of a Northern Pika. It's a small furry animal similar to a rabbit and native to the Daisetsu and Hidaka Mountains in Hokkaido. Also called "ice age survivors" or "living fossils," the 15 cm long critters are believed to have been living in the mountainous areas since the end of the ice age.

On the third day since starting the search, the photographers finally caught a glimpse of the small creature.

With round eyes and, unlike those of a rabbit, small round ears, it's easy to understand how many "Pika fans" from all corners of Japan and beyond come to see these cute-looking creatures.

But there is concern for these peaceful critters' survival.

One cause is global warming. Northern Pika prefer cool climates, so as temperatures continue to rise, their limited habitat and existence could be endangered. In fact, to prevent this threat, the Ministry of the Environment has classified the Northern Pika as a near-threatened species.

Another problem is keeping humans away from the critters' habitat.

Hisashi Yanagawa, a professor of wildlife management at Obihiro University of Agriculture and Veterinary Medicine, has been trying to create the right environment for pika conservation. He explains that it's "not only the development of forest roads and erosion of control dams that are harming the environment, but the increased human contact."

To prevent this, some areas where the Northern Pika live have been sealed off with rope to prevent unwelcome human intruders. But people have continued to stray from the mountain trails to invade their habitat.

At times, unwitting visitors trample on the grass and flowers that these animals feed on. In some cases, areas have seen a decrease in the growth of vegetation because of this trend.

"I want people to understand that we need to protect pika’s habits and environment. And to watch them from a distance, rather than trying to get closer just because they are cute," explained Yanagawa.

Meanwhile on the mountain, this photographer finally caught sight of a pika and felt tempted to chase it. Instead, though, he decided against it. Not getting too close is the probably best way to show affection for these animals.

For Information or Purchase of the Photos: