The Gion Matsuri: Women in the Festival 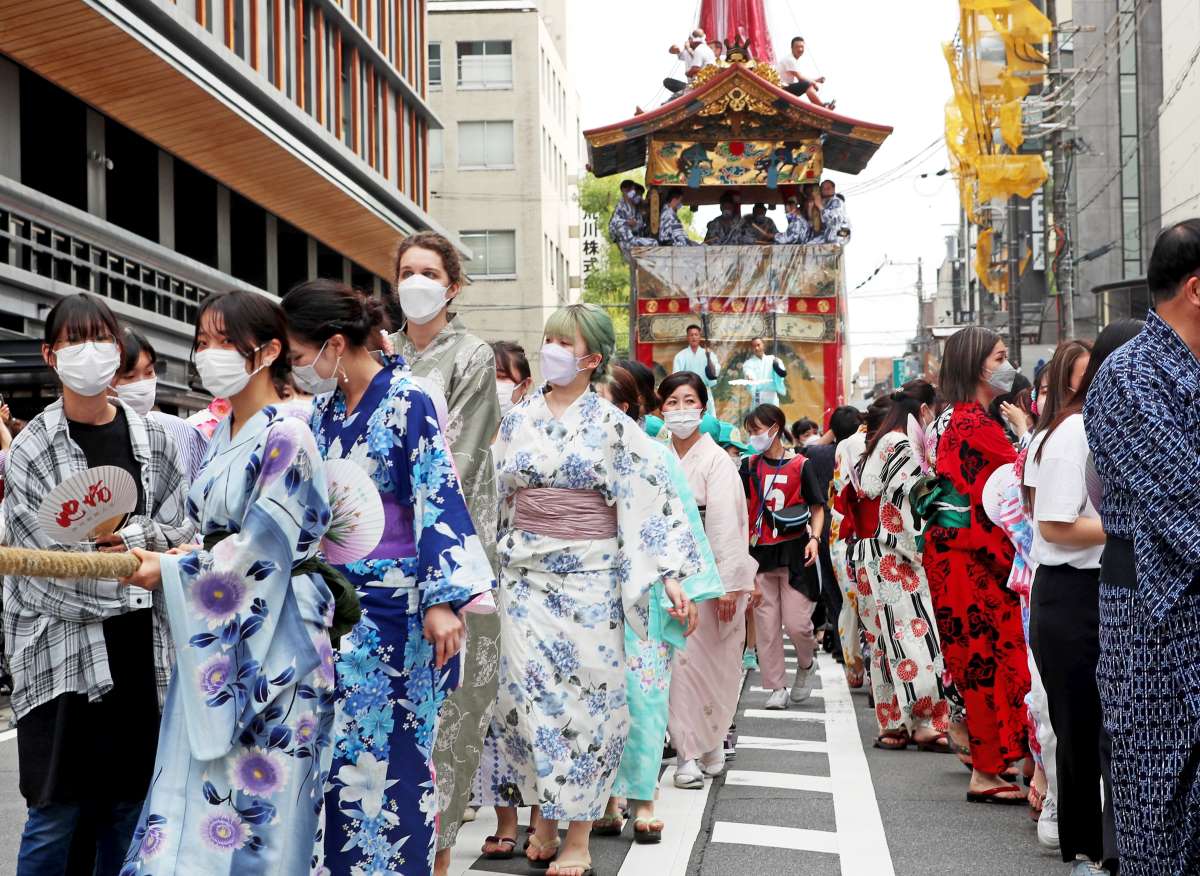 Women dressed in traditional cotton yukata try to pull the floats that have been built before the parade of floats at the Gion Festival pre-festival. July 12, 2022 (©Sankei by Yasuaki Watanabe)

Last in a series of 10 parts

It is often said that the Gion Matsuri is an “all-male” festival in which only men are allowed to participate. That is not strictly true today, and in the past it was anything but true.

Nevertheless, there is, for example, a strict taboo about women riding on the Naginataboko, although the reasons are not entirely clear.

Before Hideyoshi ordered the establishment of the present otabisho (place where the sacred palanquin is kept during the festival) on Shijo Dori, there were in fact two otabisho. One was the Omandokoro where the mikoshi of Gozu Tenno and the Hachioji were displayed. Shoshoi otabisho was the other, where Harisaijo (Harisainyo) was worshiped separately.

The procession of mikoshi also followed completely different routes. It probably would be excessive to say that Harisaijo was considered on a par with her husband Gozu Tenno, but she certainly was considered important. She also seemed to lack any of his menacing features.

Legends of the Mikoshi Parades

At first, the mikoshi from the Gionsha were only carried through the streets and then returned straight to the shrine. Then as the story goes, in 974 a nobleman named Hata no Sukemasa received an oracle in a dream declaring that his home was to become an otabisho for the Gionsha and he was to become a resident priest there.

Supposedly, the emperor also had a similar dream. Hata’s mansion therefore became the Omandokoro otabisho, which survived till 1531 when it was burned down during a civil disturbance.

The Shoshoi was established some distance to the north, not far from the Shinsen-en. At that location, there already existed a sacred well, the water of which if drunk was said to protect from epidemics.

Recall that Harisaijo was the third daughter of the Dragon King of the Southern Ocean. Dragon gods were also said to dwell in the lake within the grounds of the Shinsen-en as well as beneath the Gionsha itself. The connection between water and disease or its prevention is clear.

Apparently, once the terrible Gozu Tenno became reimagined as a guardian against epidemics, he came to be seen as a manifestation of Yakushi Nyorai, the Buddha of healing.

Likewise, Harisaijo became identified with the 11-Faced Kannon bodhisattva who was called upon for help in difficult situations. Harisaijo was also identified with the Onmyodo goddess Toshitokujin, who supposedly had control over auspicious directions and bountiful harvests, and who was prayed to at New Year’s for good fortune in the coming year.

Harisaijo was portrayed as beautiful and compassionate, without the vengeful streak her husband displayed. However, relatively few pictorial representations of her have survived.

There are plaques and mini-shrines marking the sites of these two former otabisho. You can find the one for the Omandokoro on Karasuma Dori near Shijo, wedged between two buildings, one of which is the Daiwa Roynet Hotel.

The site where the Shoshoi was located is behind what is now the Kyoto Shimbun Building on Karasuma Dori just south of Marutamachi Dori. The Shoshoi otabisho was not eliminated entirely, however, but was moved to the grounds of the nearby Imperial Palace (Kyoto Gosho) where it became the Shoshoi Jinja. That is an indication of how important the worship of Harisaijo (now Kushinadahime) was in the past.

According to the historian Haruko Wakita, the Kuze Komagata Chigo probably also have had some special connection to Harisaijo and the Shoshoi since he accompanied her mikoshi procession.

Nowadays, a miko or “shrine maiden” is often a young woman working a part-time job selling amulets and performing other such jobs at Shinto shrines. They are readily identifiable by their clothing: red hakama (pleated trousers) and white kosode upper garment.

However, in days past miko were full-fledged female shamans. Interestingly, and perhaps counterintuitively, although the kanji used today for the word means literally “shaman woman,” in the past the characters for “god child” were used instead.

Originally, shrine miko were expected to be virgins consecrated to the deity. But in many cases, miko were closer to sorceresses.

In the early goryo-e rites, miko or onmyoji would call down ekijin, causing them to enter the object to be set adrift.

At some point, the emphasis changed to trying to convert an especially powerful ekijin into a protector. There were miko at the Gionsha delivering oracles, engaging in fortune telling and faith healing, kagura dancing, and perhaps conducting exorcisms. No doubt their services were much in demand, since the ruling classes from the Heian period to the Muromachi period were enormously interested in shamanistic practices.


Women in the Festival

Miko are clearly shown taking part in the Gion Matsuri festivities in emaki scrolls such as the Nenchu Gyoji Emaki, created in the late 12th century at the order of retired emperor Go Shirakawa. It is not clear, however, why these miko are accompanying the mikoshi; perhaps they performed kagura dances as part of the festivities.

In fact, artistic performances of many kinds were very much a part of the Gion Matsuri in its earlier forms. Mention has already been made of the popularity of dengaku and sarugaku dancing.

Emerging in the Kamakura period and reaching its height of popularity in the Muromachi era, kusemai was a performance art that combined dance and oral recitation of a narrative to a rhythmic musical accompaniment with a strong irregular beat. It was usually performed by a male dancer or chigo, although it may have originated among the shirabyoshi class of professional female prostitute-entertainers who dressed like men.

Kusemai had a major effect on the development of Noh theater. Clearly, dancing in different styles, Noh and various other kinds of performances took place on the floats that were the forerunners of the modern yama and hoko.

The Kasuga Wakamiya-On Matsuri held in Nara every December seems to have preserved many traditions similar to those of the Gion Matsuri in earlier days, including Sei-no-o purification dances involving several men with white facial coverings, and mysterious ceremonies carried out in the dark. The Sei-no-o (the kanji literally mean “slender men”) dances appear to have been developed from medieval kugutsu puppet performances performed by wandering groups of performers.

Incidentally, many entertainers from Kyoto’s demimonde and the lowest class of kawaramono (“riverbed folk”) participated in the Gion Matsuri before Hideyoshi imposed a rigid class system.

In fact, in the early days women and groups which later became subject to discrimination readily participated in the Gion-e. They became excluded during the Edo period, especially after the influence of Neo-Confucianism spread among the ruling class, and it was then that the festival became largely a male-only affair.


Moving Women Aside – and Bringing Them Back

In effect, in the new guise of Kushinadahime, her role became that of Susano-o’s consort, nothing more. That was certainly no way to treat a lady, especially a lady who was said to have given birth to 84,654 gods, including the Hachioji.

The position of women in the Gion Matsuri tradition is not immutable. And just as they lost status after class distinctions hardened and the position of women declined following Japan’s reunification in the late 16th century following centuries of civil war, the pendulum now seems to be swinging the other way.

The fact is that the Gion Matsuri could never be staged without all the work that women do behind the scenes. Just to give one example: they are mostly responsible for making the chimaki and other goods sold during the festival that provide income necessary to keep the tradition going.

Some neighborhood chonai have started to allow women to participate as musicians on their floats, although change has come at what at times seems a glacial pace.

That failure was made up for somewhat when the parallel Hanagasa Junko (“Flower Umbrella Procession”) was started in 1966.

This innovation appeared during the decades when the Saki Matsuri and Ato Matsuri were combined. But it was also in a sense a revival of the Kyoto Senshoku Matsuri (“Kyoto Dyeing and Weaving Festival”) which in prewar years was frequently referred to as Kyoto’s “fourth great festival.” It had drawn crowds that vied with those of the Gion Matsuri in size.

During the festival parade women wearing costumes in designs from various historical periods ranging from the Kofun Jidai (“Tumulus Period”) up to the end of the Edo Period paraded through the streets of the city. The decline of Kyoto’s traditional garment industry and World War II led to its demise.

Although not part of the traditional lineup of festival events associated with the Gion Matsuri, the Hanagasa Junko has quickly become one of the most popular events during the Gion Festival. This is even though, like the Yamahoko Junko of the Ato Matsuri, it takes place on the morning of July 24.

Starting at Yasaka Shrine, geisha and maiko from Kyoto’s hanamachi entertainment quarters, as well as expert practitioners of traditional performing arts, men carrying large umbrellas and adorable children parade along a long route that takes them to City Hall, among other spots.

The fabulous kimono and other colorful costumes worn by the hundreds of parade participants attract photographers like ants to a company picnic. And there are free performances, including the “Heron Dance” and other dances by children at City Hall. Then there are other performances back at Yasaka Shrine in the evening.

Unfortunately, the 2022 version of the Hanagasa Junko was called off because of the lingering problems posed by COVID-19.

In his novel Koto (“The Old Capital”), Yasunari Kawabata, recipient of the 1968 Nobel Prize for Literature, has a scene which takes place in front of the otabisho during the Gion Festival. It concerns the custom of “seven-turn” silent worship (mugon mairi), which reportedly is especially popular among the geiko and maiko of the Gion who desire to ask the gods of Yasaka Shrine for a special favor.

It must be done at the otabisho during the week the gods are in residence there.

There appear to be two interpretations of what this practice entails. The first is that the person asking for the favor must make one round trip per day from the Gion to the otabisho during the week the three mikoshi are there. It takes about fifteen minutes by foot each way. The other is that the seven round trips need to be made on the same day. Either way, not a word must be spoken, even by accident, while undertaking the mugon mairi.

In any event, geiko are most likely to make the walk late at night once they have finished entertaining customers. But doing so can sometimes be easier said than done, since inebriated, shameless customers who are well aware of the importance of proper etiquette in greeting customers or social superiors, will purposely attempt to force the geiko to speak during their walk.