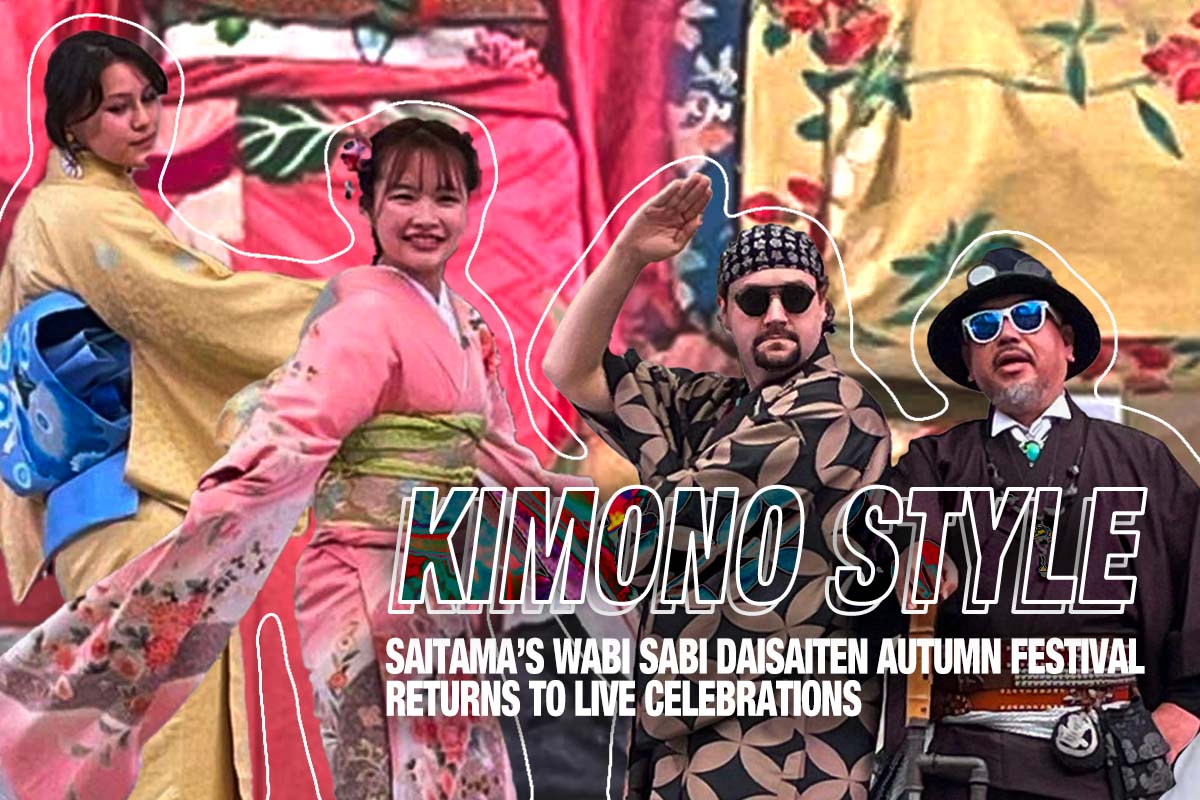 Saitama Governor Motohiro Ono addresses the crowd at Omi Park for the Wabi Sabi Daisaiten autumn festival of every style of kimono.

This year felt like a step towards normality with live performances, as Wabi Sabi Daisaiten took place in Omiya park on November 20 and 21. Last year in 2020, the event was limited to an online performance because of COVID-19.

This annual event is a celebration of Japanese culture in Saitama. The leaves in neighboring Hikawa Shrine were in all their red autumn glory, and the color was multiplied by the colorful kimono of small children going to the shrine with their families for their seven, five, three [years-old] celebrations. There were also several young women in beautiful furisode, presumably taking pictures for their upcoming coming of age celebrations.

Though the pandemic is probably not over, it was wonderful to at least be able to have a live event after all this time. Chairs were well spaced and people were reminded to maintain social distancing.


Many Ways of Celebration

As in previous years the kimono fashion show was organized by Midori Fujii of Kawagoe Kimono Walking Group NPO. The aim of the fashion show was to demonstrate diversity in the types of kimono and ways of wearing them, and also in the wearers.

The first part of the show consisted of formal kimono. To begin, two young girls and two young men modeled furisode and formal men’s haori and hakama outfits. These are the most formal garments for young people.

The models were young people who grew up in child care institutions without parents to give them a formal coming of age celebration when they reached 20 years old. Masaco Yamamoto set up an Accha Project NPO, an organization to support those young people, so that they can wear kimono and have their photographs taken on this special rite of passage. This is important to help them feel equal with other people of their own age who celebrate in this way.

Following the fashion show, three women from the Kawagoe Kimono walking group entered wearing kuro tomesode, the formal black wear for married women. These kimono have five crests, one at the top and other confined to the hem area.

The severity of the black with white collars, and the gorgeous designs on the hems paired with beautiful formal obi woven with golden threads, usually from Nishijin in Kyoto, make them stunning kimono. Unmatched in elegance and style, they were adorned with designs to bring joy and happiness. There was a treasure ship, the thunder god and cranes as well as auspicious flowers on the kimono.

Having shown the most formal of the kimono in the show, the second half presented a demonstration of the diversity in daily dress that kimono embodies.

Two women from small kimono businesses demonstrated wearing kimono mixed with western dress elements. One wore a shirt and tie and boots under a grey kimono, giving the impression of a suit. The other woman wore a yellow striped kimono from the Taisho era with painted florals, and a felt hat. The kimono was worn short with a pleated skirt underneath. We could feel the freedom of the Taisho period, (the early 1920s) in the outfits.

The pair that followed were young female students. Their kimono outfits were cute and colorful. One wore a Showa era salmon pink kimono with large bold flowers, paired with a casual obi showing maples and chrysanthemums to go with the season. She had an embroidered collar and a tiny hat to accessorize the outfit.

The other girl wore a contemporary pale-yellow kimono with a rose jacquard pattern, and an obi that had a picture of a girl produced by illustrator Jessie as a collaboration with Tokyo Yuzen artist Keiko Tanabe. Digitally printed, this is an example of new themes and enterprises within the kimono industry.

After that two men demonstrated how colorful and interesting men’s casual wear can be. Michael Kuledge wore a haori with a large design of semi-circular patterns, and Dragon Slayer tabi socks and collar. He also sported a beautifully woven maple leaf obi. He was accompanied by Mac Nakata, of Steampunk fame, who carried his gadgets as well as wearing hats, belts and a scarf.

The highlight of the show was when the Saitama Governor Motohiro Ono came on wearing a red-striped Kawagoe kimono and haori. His address reminded us of the importance of Saitama prefecture historically in the production of kimono.

Then onstage, Mac Nakata and his other helpers transformed the governor into a Steampunker. This was met with great delight by the audience and modeling team alike, and the show finished to great applause.

We were able to celebrate ecology through reusing old kimono, diversity in the types of kimono and varieties of models, and equality through the highlighting of Achaproject. And a great time was had by all.

While the pandemic is not finished, I hope to see kimono becoming more visible in the streets and at more and more events as we start to look forward to next year.