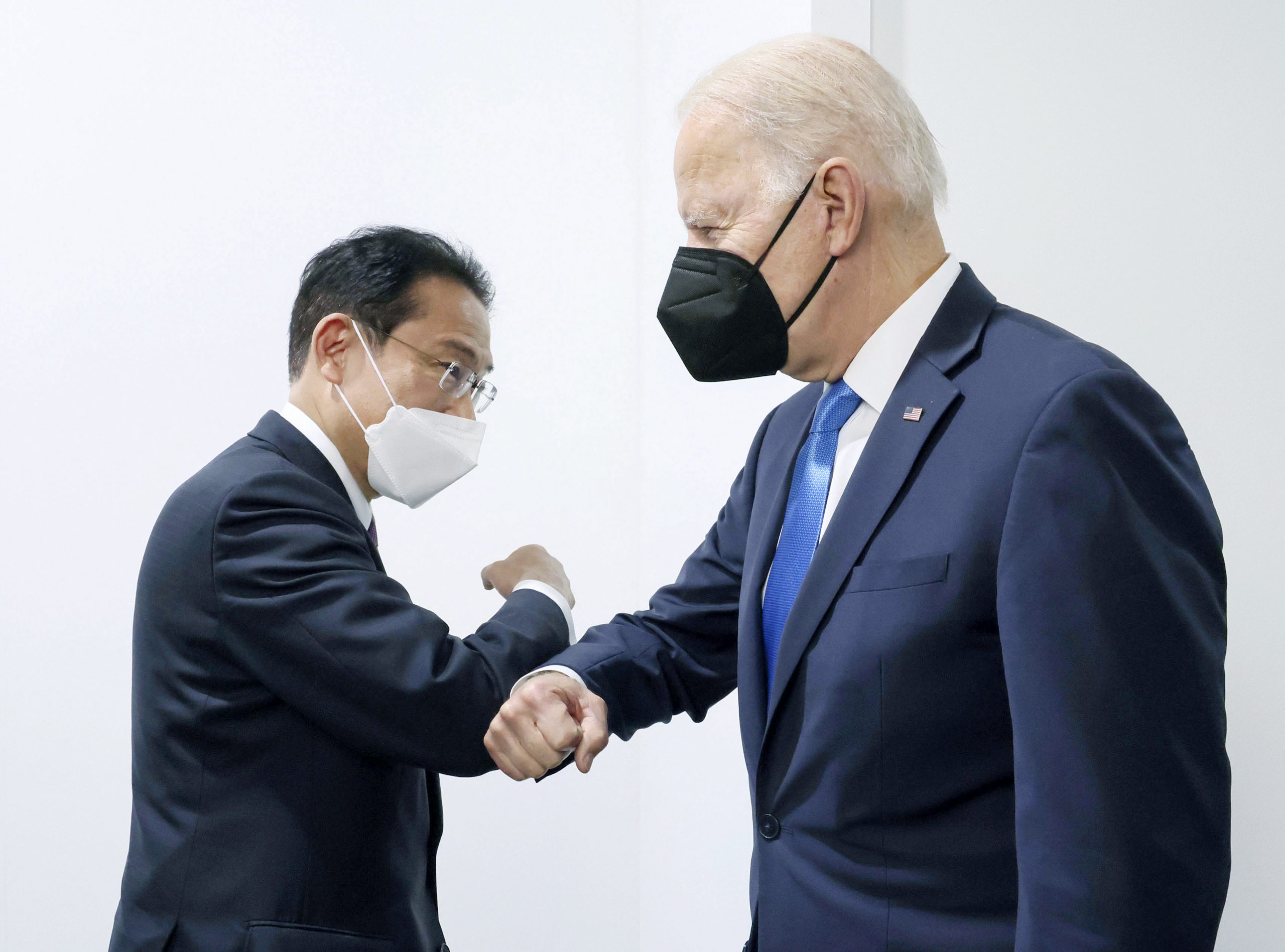 On the evening of January 21 Prime Minister Fumio Kishida took part in an 80-minute virtual summit with US President Joe Biden in which the two leaders agreed to establish an economic version of the “two-plus-two” dialogue framework.

The new framework will include the participation of each country’s top diplomatic and trade officials. It is an effort to counter China’s hegemonic behavior, as that nation steadily grows its military and economic power.

Biden also confirmed that he intends to come to Japan in the late spring of 2022 to attend the Quad summit of leaders from Japan, the United States, Australia and India.

Kishida told reporters after the summit that he and Biden had discussed frankly how Japan and the US can cooperate in providing leadership for the international community. He added, “It was an extremely significant exchange of views in terms of strengthening the Japan-US alliance.”

With China obviously in mind, the summit participants agreed to deepen cooperation “toward realizing a ‘Free and Open Indo-Pacific.’”two

They also reaffirmed the importance of peace and stability in the Taiwan Strait and close cooperation to deal with the North Korean nuclear and missile issues. Biden also supported a swift solution to the long-festering issue of the abduction of Japanese citizens by North Korea.

Kishida also announced that Japan will be revising its national security strategy and other key defense documents as it is resolved to substantially beef up its defense capabilities. At the same time he mentioned that Tokyo will consider acquiring the “capability to attack enemy bases,” a promise which Biden welcomed.

The two leaders further reaffirmed that they would work closely to deter a Russian attack on Ukraine.

Prior to the bilateral summit, the two governments issued a joint statement on the Treaty on the Non-Proliferation of Nuclear Weapons (NPT) and the two leaders reaffirmed that they would strive to bring about “a world without nuclear weapons.”

The new economic version of the “two-plus-two” arrangement calls for discussions involving on the Japanese side Foreign Minister Yoshimasa Hayashi and Economy, Trade and Industry Minister Koichi Hagiuda and on the US side Secretary of State Antony Blinken and Commerce Secretary Gina Raimondo.

The participants are expected to discuss cooperation regarding the Indo-Pacific region in fields such as infrastructure development and technology sharing as a counterweight to China’s ambitious “One Belt, One Road” economic bloc concept.

During the meeting, Kishida also called for the US to return to the Comprehensive and Progressive Agreement for Transpacific Partnership (CP-TPP)—a trade grouping that China has applied to join.


Reality Check on the Role of Nuclear Deterrence

On January 21 the governments of Japan and the United States issued a Joint Statement on the Treaty on Non-Proliferation of Nuclear Weapons, which emphasized their commitment to cooperate in working for the non-proliferation of nuclear weapons and nuclear disarmament.

A “world without nuclear weapons” has long been a major theme for Kishida, who is a native of the atomic-bombed city of Hiroshima.

Biden has also expressed his desire to see the role of nuclear weapons in defense policy reduced. But there is an inherent danger that the combined aspirations of the two men in this regard might destabilize Japan’s strategic environment.

Addressing the regular session of the Upper House of the Diet on January 21, Prime Minister Kishida said with great earnestness, “Tonight during my virtual conversation with Mr. Biden, I confirmed our mutual commitment to working together toward ‘a world without nuclear weapons.’”

Even though he is known for his willingness to change his mind on issues, as was evidenced by his change in policies to deal with COVID-19, he has remained fixed in his views on the nuclear issue for many years. Kishida is said to have looked over the joint statement before the Foreign Ministry and US Department of State released it.

Furthermore, the Biden Administration is apparently getting ready to announce a Nuclear Posture Review (NPR). In an article published in the spring of 2020, Biden wrote that “the sole purpose of the US nuclear arsenal should be deterring—and if necessary, retaliating against—a nuclear attack.”

Political observers will closely monitor how the president’s views are reflected in the NPR.

When Biden was serving as vice president under former president Barack Obama, that administration considered adopting a policy of “no first use” for nuclear weapons. But it abandoned that idea in the face of blowback from the US military and allied governments.

Biden’s “sole purpose” thesis appears to represent a revival of that thinking. Indeed, when the Biden Administration was launched, some Japanese officials warned, “Left wingers from the Obama Administration are certain to be influential.”

If the US is not prepared to respond with nuclear weapons should an ally be attacked with conventional weapons, biochemical weapons or other weapons of mass destruction, that would surely tempt China or North Korea to launch an attack.

At the same time, we have a leader of the Japanese government who has adopted a stance that might be viewed as excessively idealistic. As of now, it looks like the Kishida Administration will follow in the footsteps of past administrations in terms of harboring doubts about a policy of “no first use of nuclear weapons.”

Nevertheless, the prime minister’s enthusiasm for the abolition of nuclear weapons is alive and well. Kishida is appointing a special advisor to the prime minister on nuclear disarmament. During his January 17th policy speech, Kishida also announced the establishment of an “international group of eminent persons for a world free of nuclear weapons.”

Although there is no direct link between Kishida’s long-term goal of abolishing nuclear weapons and the nuclear strategy of the US government, it cannot be denied that the “idealists” group within the Biden Administration may draw encouragement from the prime minister’s stance.

It is said that Kishida’s “realism diplomacy for a new era” was his own idea. But especially in regards to issues connected with nuclear weapons, we have to question the prime minister’s sense of reality.

(Read the articles on which this is story based in Japanese at this link .)