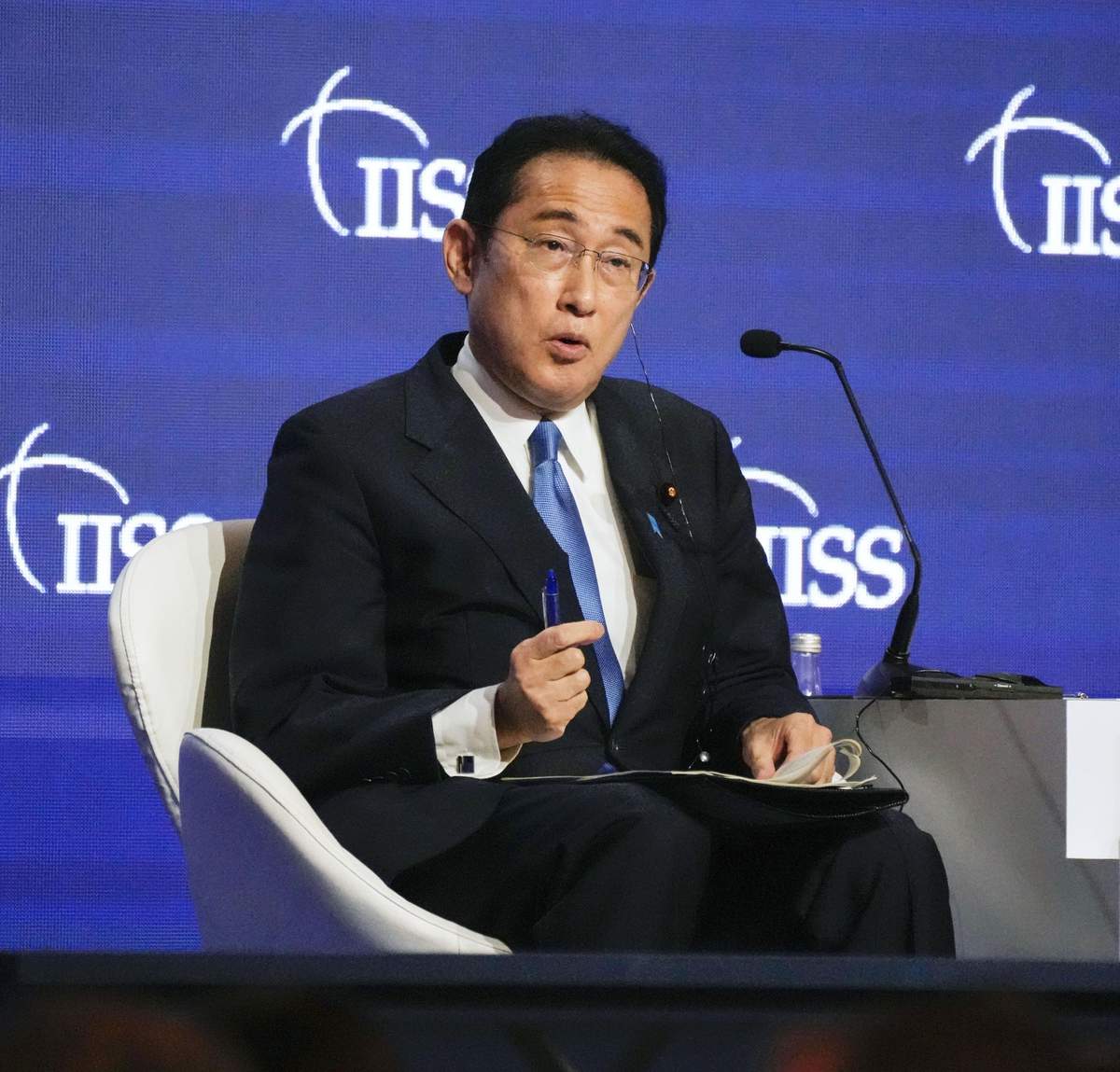 Prime Minister Fumio Kishida responds to questions after his keynote speech at the Shangri-La Dialogue in Singapore on June 10. (Kyodo)

A lot happens at the Shangri-La Dialogue, the annual gathering in Singapore of defense officials, experts, and hangers-on.

One of the highlights of the 2022 event — even more than China’s defense minister reciting his list of complaints to United States Secretary of Defense Lloyd Austin — was Japanese Prime Minister Fumio Kishida’s speech.

Sometimes it’s useful to wait a bit and digest what you heard before commenting on what it meant. A week has passed, so here goes:

Japan is certainly being far more active in asserting itself ー and I suppose taking a leadership role ー in Indo-Pacific affairs than it has done before in the modern era.

Prime Minister Kishida’s appearance in Singapore and his speech were significant in their own right. But, most of all, he addressed security matters and indicated that Japan was going to play its part in ensuring a “free and open Indo-Pacific.”

Of course, that expression means ensuring the region is free of Chinese intimidation and domination. He didn’t use quite those words, but his meaning was clear enough.

In the past, you’ll recall, until Prime Minister Shinzo Abe showed up in 2012, Japan’s regional role was mostly economic and commercial, and ODA ー overseas development assistance. It purposely shied away from a security role, even verbally.

Remember the fierce political opposition in Japan to the idea of the Japan Self-Defense Force (JSDF) doing anything outside Japan, or even dealing with foreign militaries in any serious way? Prime Minister Abe started the shift…and now Kishida is keeping the momentum going.

What Does It Actually Mean?

It means you will see the JSDF (particularly the Japanese Navy, but the other Japanese services to a degree as well) conducting operations, exercises, and other engagements throughout the region more than anytime in the last 75 years. Of course, the JSDF is small and its resources are so limited that it’s not as if it’s going to blanket the region.

Prime Minister Kishida also announced the Japan Maritime Self-Defense Force (JMSDF ー Japan’s Navy) will be sending a small task force (led by the amphibious ship, JS Izumo) throughout the Pacific and Southeast Asia to conduct exercises and engagements. A couple of destroyers and a submarine will also be going along.

This would not have been thought possible, say, five years ago. Now it’s considered normal. And you’ll note almost nobody in Japan is complaining. Nor is anyone in the region, except the People’s Republic of China. But the Chinese communists complain about everything, so that’s to be expected.

Also, Japan announced that it would be providing a couple billion dollars worth of security assistance materials to certain Asia-Pacific countries over the next few years. This too is noteworthy. Let’s hope Tokyo has a good plan worked out.

And, finally, the Quad has announced it will be starting a maritime surveillance scheme.  The Quad nations will be using commercial satellite imagery to help regional nations see what ships are in their territorial waters and exclusive economic zones. This is particularly directed against so-called dark shipping that operates without tracking devices. But it also applies to all ships that violate a nation’s maritime boundaries — even with transponders working.

Of course, most of the dark shipping ー besides smugglers ー is the Chinese fishing fleet that operates with impunity and vacuums up the sea life anywhere it finds it. Beijing won’t like the Quad initiative.

It is also useful in tracking China’s maritime militia that bullies other nations’ fishermen, their coast guards, and maritime law enforcement ー as has often happened to the Philippines and Vietnam. Beijing won’t like that either.

So this is a good, practical initiative ー assuming it is conscientiously undertaken. Time will tell.

This all appears to have been coordinated with the Americans (and the other Quad members) both at the military and civilian levels. It’s good to see Japan showing this initiative. To some extent, Tokyo recognizes that it can no longer rely on the Americans to take care of things.

What about the mention of Japan obtaining a long-range strike capability?

Japan realizes that if it is going to be taken seriously, it has to have the capability to hit back (or even hit first) at any country that attacks it or is about to do so.

Currently, Japan has no real capability to strike an enemy ー and missiles are an effective way to do it.

China and North Korea routinely threaten Japan ー even with nuclear attack.  One hardly blames Japan for wanting the weapons that allow it to better defend itself.  And sometimes it’s good to be able to launch your own missiles rather than just try to defend against and swat away incoming missiles.

Long enough to reach into North Korea and also into China. You want to be taken seriously.

Will this capability have any effect on China’s influence efforts in Southeast Asia and the Pacific Islands?

No. Having a strike capability ー and Japan still isn’t quite sure what that means ー doesn’t have any real effect on China’s influence in ASEAN or the Pacific Islands. But a more capable and a bigger and better-equipped and organized JSDF will be a useful piece of the puzzle if Japan wants to influence on its own behalf.

Also, being better able to operate with the American forces will be important. There is lots of room for improvement ー despite the 60-plus-year alliance.

The PRC will complain that Japan is returning to the militarism of the 1930s. That is nonsense.  Japan isn’t capable of threatening anyone ー and it doesn’t want to.

Indeed, it has been one of the most responsible nations on the planet over the last 75-plus years. It is the Chinese communists who are now trying to act like the 1930s Japanese and to set up a Chinese version of the Greater East Asia Co-Prosperity Sphere.

Japan has an important role to play in the region ー to include a military role ー and it’s good to see the Japanese being more active. Tokyo does need to figure out exactly what it needs to do, especially defense-wise, and I’m worried that debate will go on and on. Somebody needs to tell them what to do. The Americans never do, unfortunately, being afraid to come across as overbearing.

But many Japanese ー even officials and politicians ー would welcome the gaiatsu (foreign pressure) and the guidance.

That’s sometimes the only way change happens in Japan. Or at least change that is faster than glacial. I suppose a crisis also forces change too….but in this case the crisis would be a Chinese attack on Taiwan or Japan (or both) and by then it is too late.