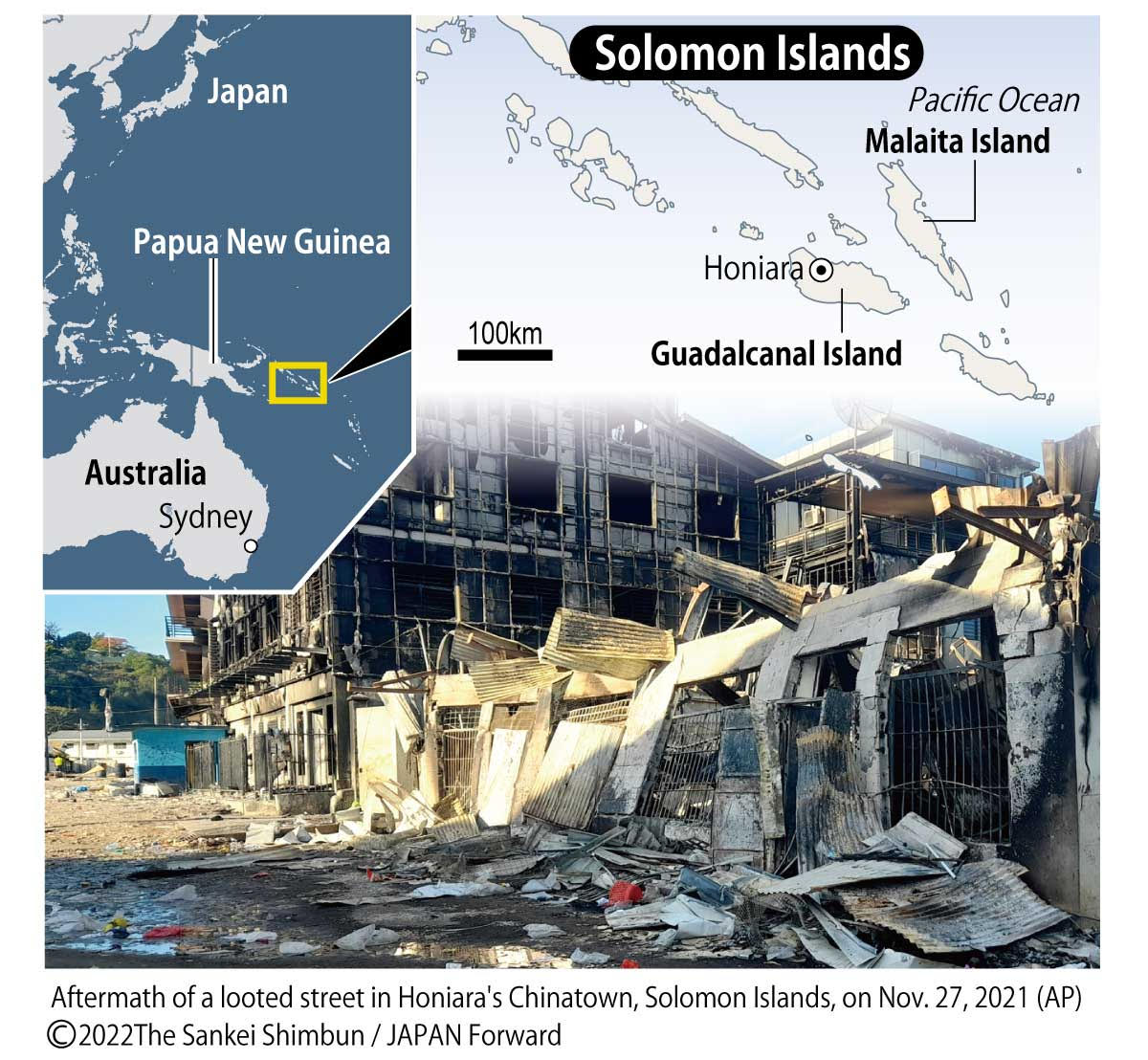 © 2022 The Sankei Shimbun and JAPAN Forward

The South Pacific island of Guadalcanal is a strategic point on the sea lanes of communication (marine shipping routes) between the United States and Australia. During the Second World War, the Imperial Japanese Army built an airbase on the island to divide the Allied forces of the United States and Australia. The island became the scene of fierce battles, where more than 20,000 troops from both sides were killed.

Eighty years later, as China continues its maritime expansion, it is driving a wedge into this part of the South Pacific, shaking the region again.

China Wedging Into the Solomon Islands

The source of the shock is a security pact signed by China and the Solomon Islands in the capital city of Honiara on the island of Guadalcanal. The two countries are not disclosing the agreement.

In March, a document believed to be a copy of the draft Solomons-China agreement was leaked on social networking sites. The leaked document revealed shocking content to neighboring countries.

The pact can be read as if the island nation were ceding its sovereignty by recognizing China’s authority.

Australia is probably the most shocked by this Chinese diplomatic surprise attack. The British Commonwealth nation has long considered the Pacific Island nations to be in its backyard. Located northeast of Australia, the Solomons island chain, like Australia, is part of the Commonwealth.

On paper, both have Queen Elizabeth II as their head of state. Moreover, Australia has provided significant aid to the Solomon Islands to support its national management as a regional ally of their mutual former sovereign, the United Kingdom.

However, the Chinese media have called Australia the “watchdog.” It had signed a security agreement with the island nation before China, and has often taken responsibility for maintaining order in the country, which does not have an army. In the new agreement, the Solomon Islands appear to be trying to give the Chinese more authority than its Australian counterpart.

The Diplomat, an American media specializing in foreign affairs, calls the security agreement a game-changing development for the South Pacific region. It also surmises that the actual signed agreement is “very close to the leaked draft.”

Both China and the Solomon Islands insist that Beijing will not establish a permanent military base there. However, the Australian Strategic Policy Institute (ASPI) thinks otherwise. It warns that China could slowly establish a military presence in the Pacific islands, if the Solomon Islands’ parliament approves the security agreement with China and ratifies the deal.

Australia has decided to introduce nuclear submarines through the 2021 AUKUS security framework which includes the United States and United Kingdom. Plans are to build a nuclear submarine base on Australia’s east coast.

China may seek to monitor US, British, and Australian nuclear submarines through a military base it would establish in the Solomon Islands, ASPI warns. The area is considered Australia’s gateway.

Izumi Kobayashi is an expert on the region. He is director of the Society for Pacific Island Studies and professor in the International Studies Department at Osaka Gakuin University. He points out that the conventional wisdom of the US and Australian would not have expected the signing of the security pact between China and the Solomon Islands.

This is “something that would not have happened,” he says, attributing the cause to blunders by Western nations, adding:

Australia and the South Pacific island nations can be thought of as a ‘parent-child’ relationship. Those island nations have already been independent sovereigns, but they are increasingly frustrated with Australia, which, with an authoritarian attitude, has treated them like children. They have wanted to be free from Australian control and to seek out more options for assistance beyond Australia. This kind of ambition lies behind the current circumstances.

There is the hubris of Australia. The problems are multifaceted. Various factions among regions of the Solomon archipelago are playing games by fostering competition among powerful foreign countries interested in offering them assistance.

Moreover, the ethnic conflicts in the Solomon Islands also played a role. They allowed China to take advantage of the local divisions.

The Solomon Islands, a nation of nearly 1,000 islands and atolls, gained independence from the UK in 1978. Its current population is about 700,000. However, in Kobayashi’s words, “There was no need for these islands to be united for common destiny as a nation.” This artificial binding is the root cause of the current ethnic conflicts.

As the nation’s capital was established in Honiara on the Guadalcanal Island, many residents on Solomon province of Malaita, which is about 113 km or 70 miles away from the Guadalcanal, moved to Guadalcanal. The Malaitans, who are known to be energetic and industrious, ended up holding many vital positions in the nation’s political and economic world. Conflicts between these transferred Malaitans and the native Guadalcanalese have become acute.

This ethnic conflict has spawned a politically charged environment, where supporting China or Taiwan has been the dividing issue since both nations became active in diplomacy in the South Pacific.

A long-standing diplomatic relationship between Malaita and Taiwan has meant that Taiwan-sponsored projects have tended to occur on the Island. In turn, this has strengthened their ties.

A significant policy change occurred in April 2019 when Manasseh Sogavare was elected Prime Minister of the Solomon Islands for the fourth time. In September of that year, he distanced the Solomons from Taiwan and established diplomatic relations with China.

In November 2021, unrest erupted once again in Honiara. Pro-Taiwan demonstrators who were upset with the sudden pendulum swing toward China demanded the resignation of the Sogavare government and called on it to restrengthen its ties with Taiwan. The demonstrators turned violent and destroyed shops in the city’s Chinatown.

How will the struggle for supremacy in the South Pacific between the US and China unfold in the future? In April 2022, the United States’ Biden administration sent National Security Council (NSC) Indo-Pacific coordinator Kurt Campbell and his team to the Solomon Islands.

Campbell warned Prime Minister Sogavare that the US would take “countermeasures” if Chinese troops were stationed there. It is possible that he also cautioned Solomon’s National Parliament not to approve the security agreement.

The United States has been planning to reopen its embassy in the Solomon Islands, which it closed in 1993. According to Professor Kobayashi, from the time of the Donald Trump administration, there has been a movement in Washington not to leave matters regarding the Pacific region to Australia (in anticipation of China’s expansion). He predicts, “Barring effects from Russia’s invasion of Ukraine, leadership in the South Pacific is set to shift from Australia to the US.”

On the other hand, the online version of the Chinese Communist Party publication Global Times criticized the US response to the security agreement between China and the Solomon Islands, calling it “far more hysterical than anything coming out of the Kremlin regarding Kiev.”

The Chinese CCP media outlet argues that Washington is aiming to push its own strategy in the Indo-Pacific to contain China’s territorial expansion into the South Pacific regions, South China Sea and Taiwan.

It could be said that, instead, it is Beijing’s sense of crisis over the US containment of China that prompted its offensive in the South Pacific.