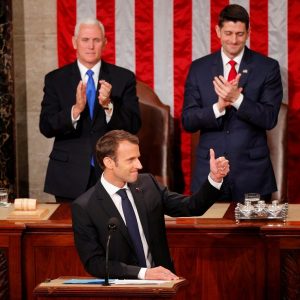 Valerie Niquet, visiting fellow at the Japan Institute of International Affairs in Tokyo and senior Asia expert at the Foundation for Strategic Research in France, sat down with Sankei Shimbun Paris bureau chief Mina Mitsui in April.

They discussed the nuclear crisis on the Korean Peninsula and the other international issues affecting the security situation in Asia. Niquet emphasized the dangers in France’s current diplomatic approach towards Asia under President Emmanuel Macron, who is just finishing his first year in office.

Below are excerpts from the interview, conducted by Mina Mitsui for JAPAN Forward.

What is the position of France on the nuclear crisis on the Korean Peninsula?

France supports the current positive evolutions but is also one of the European countries that was in favor of the policy of maximum pressure promoted by the United States and Japan. For France, the nuclearization of North Korea is a global threat that concerns us directly.

Paris is following this issue with even more attention since France is a nuclear power. Based on the nuclear capacity of North Korea and long-range North Korean missiles, France considers that Europe is also potentially under the threat of North Korean strikes. North Korea is therefore integrated into France’s deterrence strategy.

Can the North Korea nuclear problem have an influence on the Iranian denuclearization issue?

Paris considers the nuclear agreement with Tehran basically as something positive, perhaps with some adjustments and a rigorous verification regime. The risk to Washington if this agreement were unilaterally negated would be a loss of confidence in the reliability of the international commitments of the United States. It is this element that could weigh on the resolution of the North Korean question. It could give Pyongyang the impression that any signed agreement that leads to a full, verifiable denuclearization could still be called into question later by the United States.

President Macron has made efforts to build personal relationships with President Donald Trump. Do you think these efforts will bear fruit in the diplomacy between the two countries?

President Macron’s position in Europe is facilitated by the withdrawal of Great Britain under Brexit. The French President aspires to play a leading role in the European Union. Developing links with the largest powers, such as the United States, can strengthen his influence and prestige.

Do you find there are differences between President Macron and François Holland, his predecessor, in the field of Asian diplomacy, especially with China and India?

President Macron’s policy seems to be generally in line with that of François Hollande, although with a different, more demonstrative expressiveness. Former President Hollande and his defense minister Jean-Yves Le Drian (currently the foreign minister) had the merit of expanding the interests of France in Asia to other partners, including Australia, Vietnam, Southeast Asia, East Asia, and India.

The planned visit of Prime Minister Abe to Paris in July 2018 was organized under former President Hollande’s presidency. Emmanuel Macron seems less interested in the complexity of strategies in Asia, including the role of China and the importance of other partners. For example, he took care not to “offend” China by declaring publicly that he would not receive the Dalai Lama without prior consultation with Beijing.

If he goes to India, it is also because important contracts are in negotiation. When he was in Washington he mentioned the positive role of the United States on the North Korean issue, and then went on to mention that of China, even though China has been very much in the back seat on the recent evolutions.

During his stay in Beijing in January, President Macron announced his wish to visit China every year, while at the same time he continues to delay his anticipated visit to Japan this year. Is President Macron interested only in engagement with powerful countries such as China and the United States?

The danger for President Macron is indeed to attach importance only to the “great powers” that give him the opportunity to make important announcements, particularly in terms of contracts. He seems to be tempted to go back to a more traditional Gaullist posture on Asia, slightly unbalanced in favor of China, whose positive role he might overestimate. This policy is not well suited to the contemporary strategic situation in the region.

The Japanese-French relationship is also important; Paris and Tokyo share important values and economic interests. France should better understand the importance of the role that Japan can play in Asia and beyond.

Japan could become an important partner for France in terms of maritime cooperation as well as on other continents, such as in Africa. Paris also needs to understand the urgency of the strategic challenges—and the constraints—that Japan faces in Asia.

Valérie Niquet earned her PhD in political science at the Sorbonne in Paris. She is a senior visiting fellow at the JIIA Japan Information Center in Tokyo and research master in the politics of defense, geostrategy, crises and conflicts, and the Asia-Pacific at the Foundation for Strategic Research in Paris. Her work focuses on international relations and geostrategic, defense, and security issues, and the Asia/Pacific region. Among her recent publications, La puissance chinoise en 100 questions (in French) was published in 2017. She teaches a course on Sino-Japanese Relations in Perspective at Keio University.