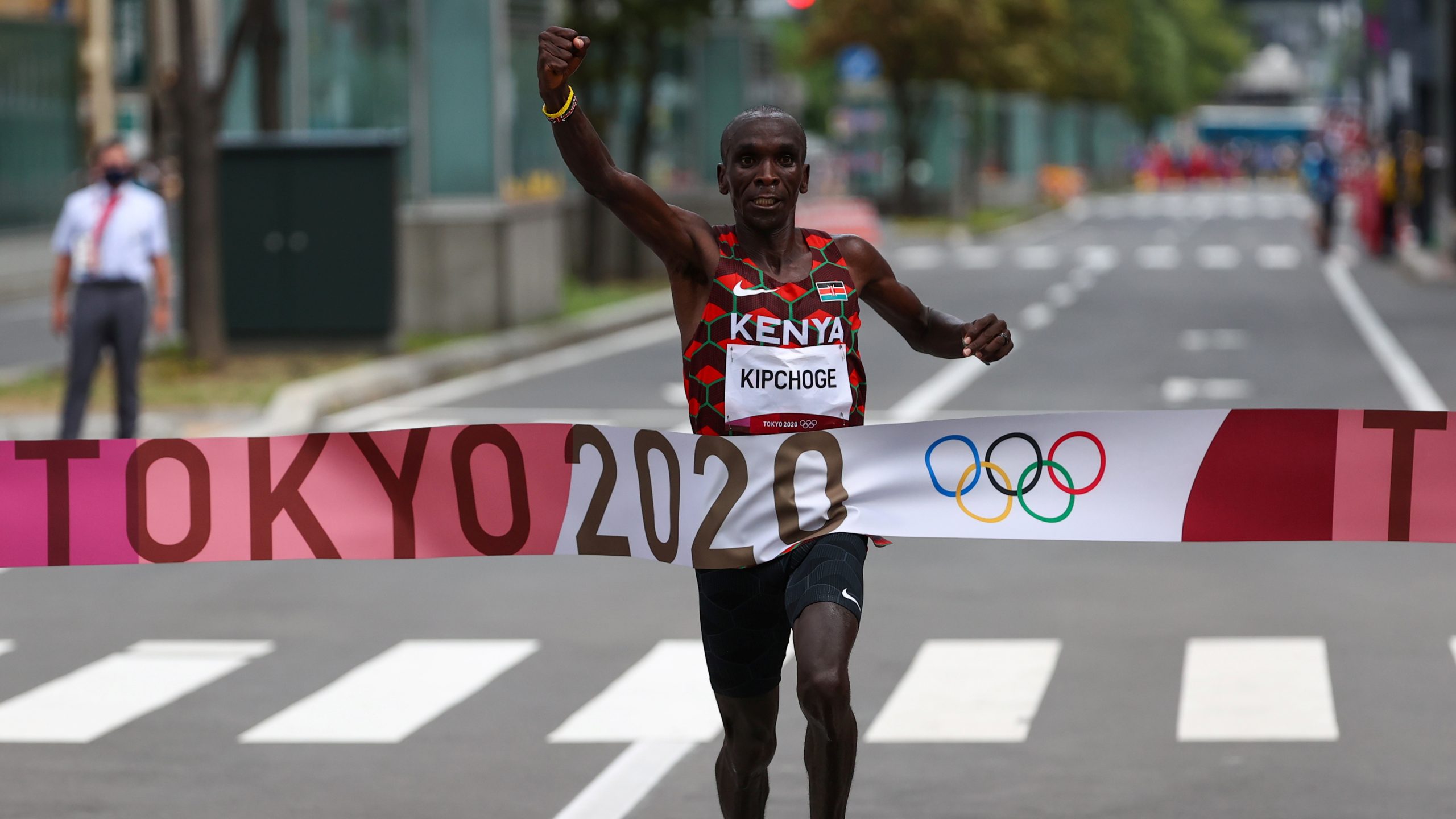 Kenya's Eliud Kipchoge crosses the finish line to win gold in the men's marathon at the Tokyo Olympics in Sapporo on August 8. (Kim Hong-Ji/REUTERS)

World-record holder Eliud Kipchoge of Kenya solidified his place as one of the greatest marathon athletes in the history of the sport on Sunday, August 8, when he defended his Olympic title to win the gold medal at the Tokyo Games.

The race was moved to Sapporo in hopes that it would be cooler than Tokyo and it was 26 degrees Celsius when the event started at 7 a.m.

Kipchoge was in the lead, or close to it, from the very start. He pulled away from the pack at the 30-km mark and crossed the finish line with a time of 2 hours, 8 minutes and 38 seconds.

“I am happy to defend my title and to show the next generation, if you respect the sport and be disciplined you can accomplish your assignment,” Kipchoge was quoted as saying by the BBC.

So dominant was Kipchoge that when he made his final run through the tree-lined streets of the Hokkaido University campus there wasn’t another runner in sight.

When he crossed the finish line he waved and smiled at the large crowd that had assembled, looking as though he could run another 10 kilometers.

With the gold medal decided, the focus shifted to the race for the silver and bronze and it provided one of the most exciting moments of the day.

Kenya’s Lawrence Cherono appeared set to complete a 1-2 finish for the African nation.

But Abdi Nageeye of the Netherlands surged past Cherono with about 20 yards remaining and then waved on his training partner Bashir Abdi of Belgium, who also passed Cherono just before the finish line to claim the bronze.

Nageeye was a full 1 minute 20 seconds behind Kipchoge while Abdi was 1:22 off the winning time.

Japan’s Suguru Osako pushed hard for a medal over the final five kilometers after falling back after the 30-km mark. He fought his way back to a solid sixth place with a time of 2:10:41 behind Spain’s Ayad Lamdassem.

Shortly after the race, Osako confirmed what he had said in the buildup to Sunday’s race, that he would retire.

A total of 30 runners, including medal hopes Shura Kitata of Ethiopia and Kenya’s Amos Kipruto, did not finish the race.