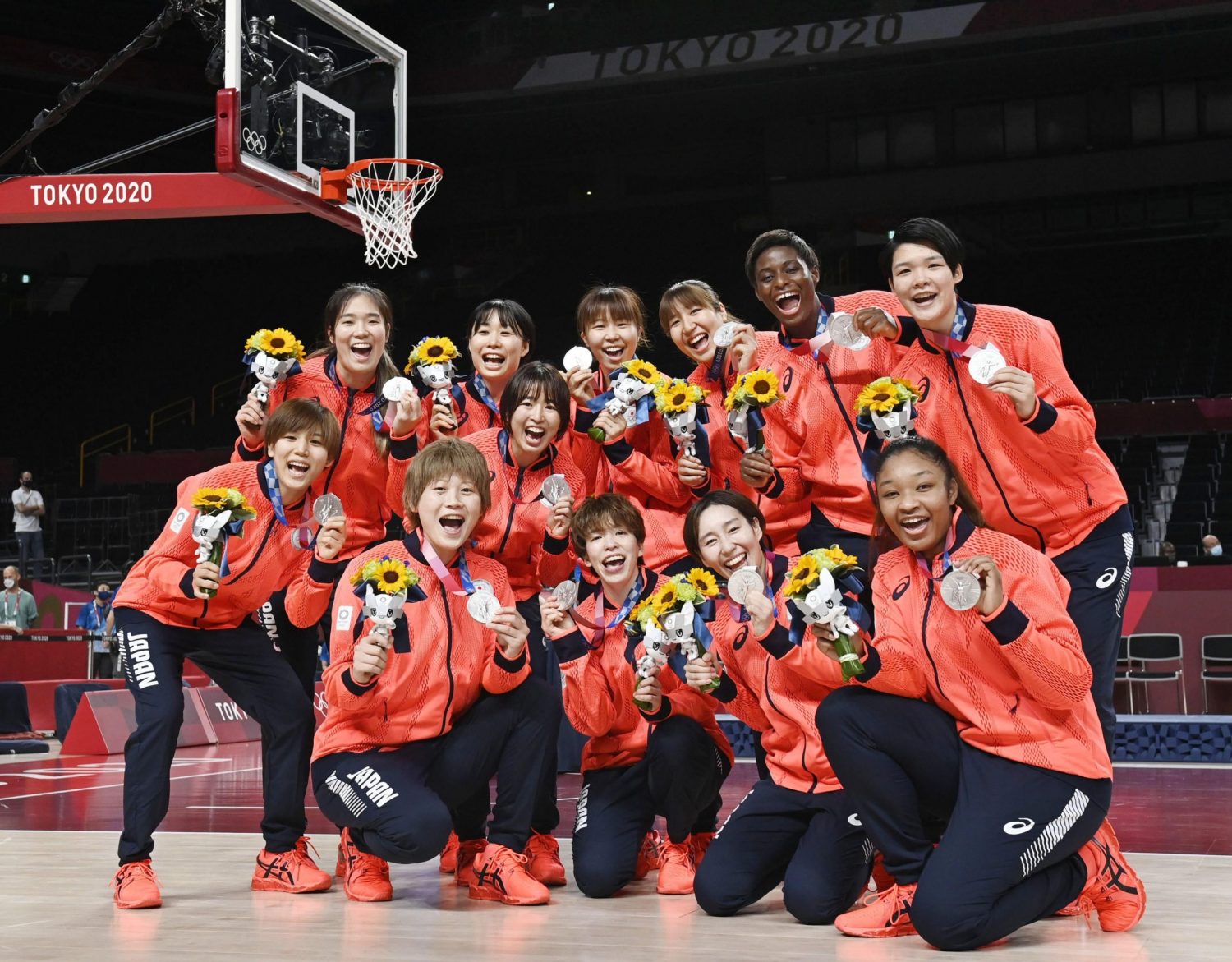 The Japan women's basketball team's players pose with their silver medals after the Olympic gold-medal game against the United States at Saitama Super Arena on August 8.

With a collective sense of purpose and single-minded determination, the Japan women’s national basketball team made history at the Tokyo Olympics.

And with pulse-rising victories over Belgium (in the quarterfinals) and France (semifinals), the team captured the hearts of the nation and attracted lots of media attention, much of it highlighting the Olympic record-breaking passing skills of point guard Rui Machida, who handed out 18 assists against France.

There was no miracle storybook finish, however, as the United States rolled past Japan 90-75, winning its seventh consecutive gold medal in the event on Sunday, August 8 at Saitama Super Arena.

The Japan women’s squad received an Olympic basketball medal for the first time, something the men’s national team is also striving to achieve.

“While it was definitely frustrating to lose today, I was really happy to be playing for a gold medal,” Machida was quoted as saying by Kyodo News. “The United States managed to take us out of our game, but playing on this stage for the first time and winning a medal was an incredible experience.”

The Akatsuki Five’s previous best finishes were fifth place (out of six team) at the 1976 Montreal Games and seventh at the 1996 Atlanta Olympics, the same summer that Team USA began its astonishing gold-medal run. (Current U.S. women’s coach Dawn Staley starred for the team in Georgia that summer.)

Team USA, the world’s No. 1-ranked team, jumped out to an 18-5 lead in the first quarter and never trailed. And for the second time in this tournament, Staley’s club defeated Japan. The first win (86-69) was on July 30 in a provisional round game.

World No. 10 Japan, however, showed the same courage and cohesiveness over the next several minutes, pulling within 20-14 on a Nako Motohashi 3-pointer late in the first quarter.

The lead swelled to 23-14 by the end of the first quarter, and the Americans, who enjoyed a considerable height advantage, put their stamp on the game with effective shooting (54% from the field) and dominating defense, holding Japan to 36% shooting.

The most telling stat for the entire game was blocked shots: Team USA 12, Japan 0.

“Japan’s hard to guard,” American superstar Brittney Griner told reporters after the game. “They can shoot it anywhere on the court. They’re a tough guard, they’re a really good team. I’m just glad we’ve got this gold.”

Moments later, there was more excitement for Japan’s fans, when Naho Miyoshi sank a 3-pointer to cut the lead to 38-32 with 4:04 remaining before halftime.

Then the U.S. heated up on offense in the closing minutes of the half, stretching its lead to 14 points before Himawari Akaho made a 3-pointer on Japan’s last possession of the half. That trimmed the lead to 50-39.

The Americans led by as many as 25 points (taking its largest lead, 84-59, with 5:51 remaining) in the second half, and Japan’s rapid-fire 3-point shooting did not produce the desired results.

Japan coach Tom Hovasse, who stepped into the program’s top coaching position in 2017 after several years as a national team assistant, expressed gratitude for his players’ hard work after the game.

“I’m really grateful to the players for their hard work for a long time,” Hovasse was quoted as saying by Sports Nippon.

Then he reflected on the upward trajectory of the national team that led to a silver medal.

“I wonder if Japanese basketball has entered a new era,” Hovasse said, according to Sports Nippon. “I think we’ll get even more results in the future. It’s a start.”

Team USA defenders kept strong pressure on Japan’s perimeter shooters and the tourney runner-up team made 8 of 31 in the final, with Nako Motohashi leading the way with 4 of 5 from beyond the 3-point arc.

What’s more, five-time Olympians Sue Bird and Diana Taurasi, who are likely nearing the end of their stellar WNBA careers, made notable contributions, too. Bird, 40, chipped in with seven points, while Taurasi, 39, had seven points, six rebounds and eight assists.

For Taurasi, another gold medal was a thrilling achievement.

“What can you say?” Taurasi told reporters later. “It’s 20 years of sacrifice, of putting everything aside and just wanting to win. It’s never easy playing on this team [with] the pressure, but this group found a way to win and I’m just happy this group got to enjoy it.”

U.S. Dominates in Second Half

After halftime, Team USA’s superior talent dictated the outcome of the game, but not without a down-to-the final-second fight from every Japanese starter and substitute who stepped onto the floor for the biggest game of their lives.

The final 20 minutes displayed Japan’s growth over the past few years and the immense pride that permeates throughout the national team, even against incredible odds.

After Griner made the final basket of the third quarter, the U.S. took a 75-56 lead into the fourth quarter.

Even when Japan faced a 25-point deficit late in the game, the team’s players stayed aggressive on both ends of the floor.

Backup point guard Saori Miyazaki’s fastbreak layup, initiated by speed and hustle, and the subsequent free throw with 90 seconds remaining made it 91-70 and drew cheers and claps from her teammates.

Miyazaki also scored the final basket of the game with 8 seconds left.

Both teams congratulated one another and exchanged greetings after the game, with the two American-born coaches engaging in a brief, friendly conversation.

“I’m glad to get a medal,” Motohashi told TV Asahi after the game.

Takada said, “I really enjoyed it.”

Indeed, Takada’s words summed up the collective thoughts of the host nation’s basketball fans who took delight in this unexpected joyride during the Olympic tournament.