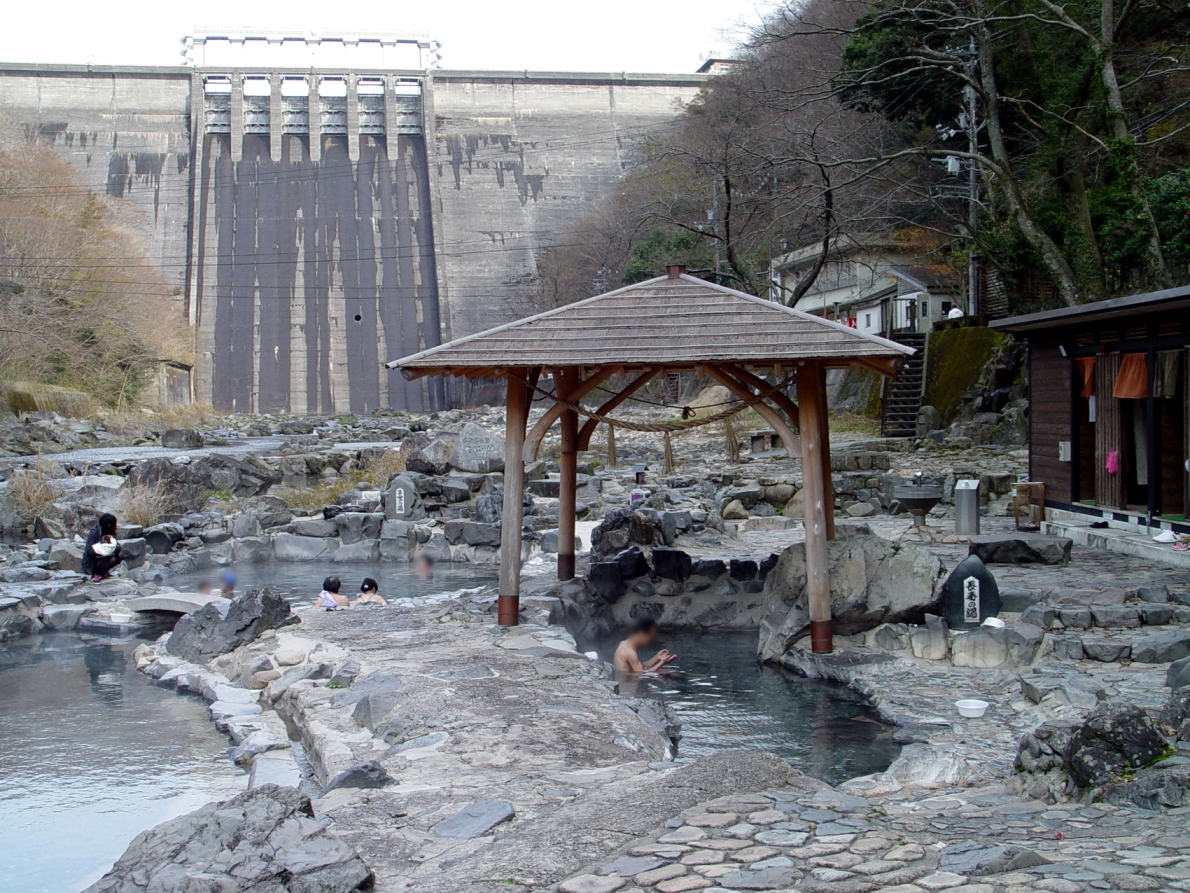 In the Yubara Hot Spring village near Maniwa City, northern Okayama Prefecture, operators of the mixed-gender outdoor hot spring Sunayu are considering providing special bathing suits for men. It’s a countermeasure against guests who ignore the rule of covering one’s body with a towel when bathing.

There is also a proposal for the strategic placement of monitoring staff to prevent the unwanted sight of full-body nakedness.

Sunayu is located directly below Yubara Dam. The hot spring is called Sunayu (sand spring) because, along with the spring water, sand spews out from the riverbed.

It is a public open-air hot spring, maintained regularly by the general incorporated Yubara Sightseeing Association, comprised of staff from the local area and city.

At Sunayu, visitors can soak in the hot spring and enjoy the view of the dam any time of the day, free of charge. The website boasts that the hot spring was chosen as “the Yokozuna of the West” for its high-quality water by a travel author in his Japan Open-air Hot Spring rankings.

Sunayu has been a popular destination as a mixed-gender outdoor hot spring for many years. In consideration of its wide variety of visitors, a rule was established in 2014 requiring those using the bath to cover their lower body with a towel or swimsuit. Recently, though, there has been a rise in complaints about bathers who breach etiquette by not covering their lower body.

However, using an ordinary bath towel to cover one’s body can be inconvenient. Towels can become heavy and cling to the body when they absorb water. As a solution, Yubara Tourism Association collaborated with Wacoal (Kyoto) to design and introduce special bathing suits for women in June 2014. These polyester bathing suits are water repellent and can be purchased or rented at nearby inns.

The introduction of men’s bathing suits was also considered at the time. However, the proposal was put on hold due to the relative ease of using hand towels to cover men’s bodies.

Still, some customers didn’t follow the rules. The issue became of greater concern with a surge of foreign visitors coming to Yubara Hot Spring Village. “Foreigners often dislike seeing nakedness or being seen naked,” said Hiroaki Ikeda, head of the association, who stressed the need to improve bathing manners.

In November 2016, the association called for improvements. It began by trying to address the problem by putting signs in nearby parking lots, along roads, and in changing rooms, saying, “Please Cover your Lower Body.”

The association started considering men’s bathing suits because they were requested by some male visitors. At the same time, it was believed such measures would serve as an indication of the local community’s determination to prevent naked bathing. Other ideas have also been proposed, including the free distribution of disposable underwear and staff placed strategically at the entrance to Sunayu.

Signs to cover the lower body are aimed primarily towards men, but some women are also breaking the rules.

He recounted that some visitors who came with their children left without getting near the hot spring baths because the sight of naked people made them feel uncomfortable.

“There are differing views on strictly enforcing the prohibition of naked bathing, but the locals want children to enjoy the hot spring safely and without worry,” explained Ikeda.

The association has gathered opinions on the ideal mixed-gender bathing conditions and expects to begin implementing new measures before the end of 2019.