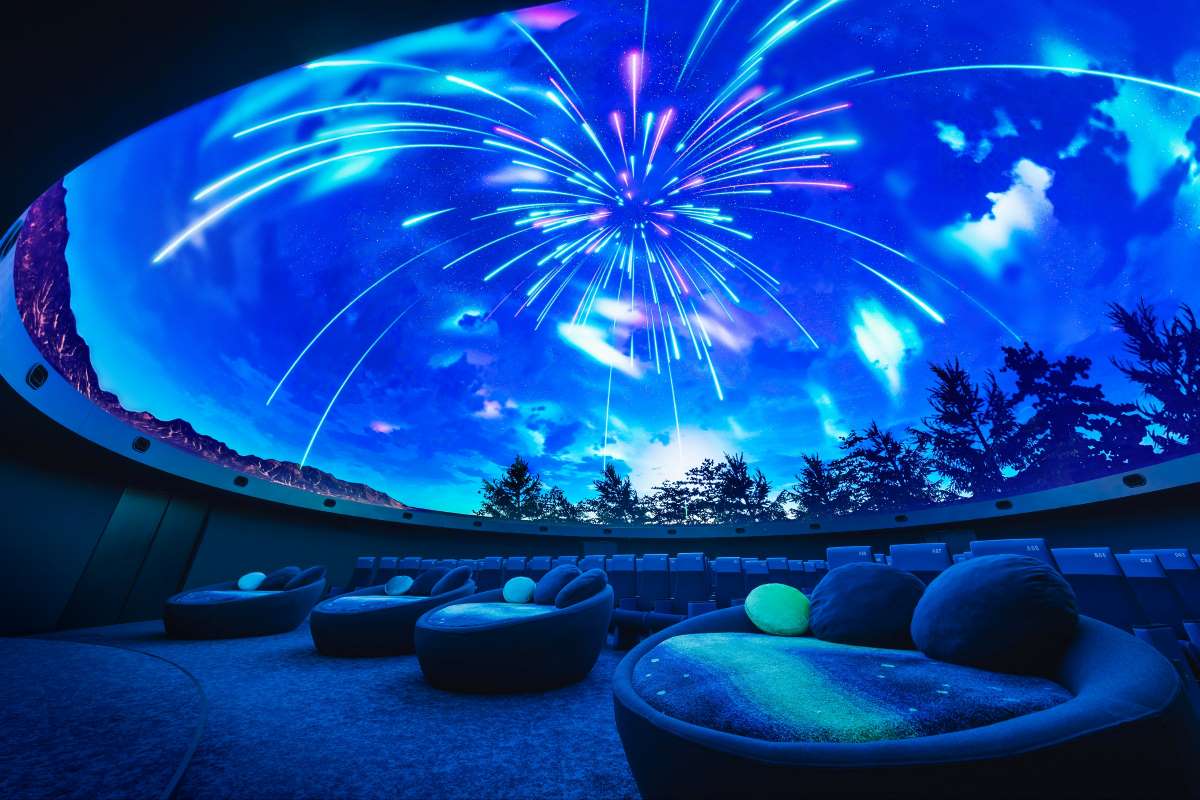 The Konica Minolta Planetarium Manten (Nagoya), directly managed by the company, is equipped with the latest equipment to showcase the beauty of the starry images. It is designed to provide healing and relaxation for adults. (Photo provided by Konica Minolta.)

Read part 1: Next Generation Planetariums: Specialists Serving Up the Stars

Planetariums in Japan have been open to the public mainly with educational purposes in mind. Now, however, they are developing entertainment-centered new services, and embracing themes such as healing spots for adults.

With the COVID-19 pandemic, demand has grown for such services as the portable mobile planetarium. Meanwhile, the next generation of planetariums continues to evolve.

The light of the lantern glows as one lays down on the lawn and looks up at the starry sky. Couples sit close together on the fluffy sofas.

This is the atmosphere visitors encounter when they enter the facility operated by Konica Minolta Planetarium (Tokyo). Although the company is a manufacturer of planetarium equipment, they also have started to operate planetariums themselves, and a total of five buildings with different themes have been opened in Tokyo, Nagoya, and Yokohama.

“I wanted to change the image of planetariums as a learning facility for children, so I aimed to differentiate them from science museums,” explains Yuki Miyagawa of the company’s sales management division about their intentions.

The main theme is the screening of original video works about stars and space that combine computer graphics (CG) and live-action films. In addition, the works feature popular actors and storylines.

There are facilities where it is possible to bring in food and drinks from a cafe, and there have been live concerts of both classical music and popular artists with the stars in the background. They are drawing audiences that planetariums haven’t seen much of so far.

“Maybe because of the COVID-19 pandemic, works that allow people to travel to places known for their starry skies, such as Uyuni Salt Flats in Bolivia, and elsewhere in South America and New Zealand were popular,” says Miyagawa.

They are open at night and are easy to stop by on the way home from work. “I think it has a role to play to allow people who are not interested in the stars to come experience them.”

Foldable and inflatable mobile planetariums, which are about 4 to 7 meters in diameter, use projectors inside their domes to reproduce the starry night. They are also spreading.

These mobile planetariums are generally good for about 20 to 60 people, and they’re popular because they are easy to enjoy indoors.

According to the Japan Planetarium Association (JPA), about 14,000 people experienced the mobile planetarium through 527 projections in 2010. In 2014, the numbers nearly tripled to 43,505 people and 1359 projections.

The performance of machines and software has improved, making it possible to provide the same content as traditional planetarium facilities. Japan has a long history with planetariums, and there is a large number of people who can provide commentary, which are also factors in the widespread popularity.

Some planetarium facilities operate these mobile planetariums. At the same time, there are also companies that specialize in this format. Kansai Mobile Planetarium is one such business.

According to Takaaki Ozeki (69), a former curator of the Himeji Science Museum who is currently working at the Kansai Mobile Planetarium, there have been changes due to the COVID-19 pandemic.

“In the past, mobile planetarium events were often held at commercial facilities such as department stores and large supermarkets. But recently the number of requests from schools for those with special needs, and kindergartens, has increased. Because we cannot go out [due to the pandemic], bringing the planetariums to the schools is convenient,” he says. There is a possibility that this format will continue in the future.

Planetariums take on various forms and formats. In recent years, the number of screenings of films about the skies has increased.

Looking at the lineups, one can find diverse works ranging from those for children featuring popular anime characters, to artistic films that comment on art about the starry sky, such as the paintings by Van Gogh. There are also scientific films that introduce the celestial bodies or are about the activities of the asteroid explorer Hayabusa, which succeeded in landing on the asteroid Itokawa (2005).

These well-produced works attractively introduce the world of the skies without demanding much effort from the viewer.

Among them, the Nagoya City Science Museum distinguishes itself with the curator’s live commentary. It is well-known in the industry, and ranks at the top of the list of facilities with the highest number of visitors nationwide. According to JPA, this museum and the Osaka Science Museum ranked first and second in 2019, before the COVID-19 pandemic.

All of these are facilities in large cities where it is easy to attract customers. And the Nagoya City Science Museum has one of the largest domes in the world, which makes it very appealing.

Other features that the facilities have in common are the substantial numbers of specialists who are familiar with astronomy, and teaching about the latest research in an easy-to-understand manner.

Katsuhiro Mouri, a specialist at the Nagoya City Science Museum, says, “Our primary purpose is not only to attract customers, but also to continue to improve the content for many years.”

At the Osaka Science Museum, specialist Yoshiya Watanabe says, “The idea that only children can learn is a big loss to society. I want people to feel the joy of learning and studying even when they are 90 or 100 years old.”

Planetariums have changed their services with the times. The enthusiasm of the people who support them remains at the root of their popularity.

The year 2023 marks 100 years since the birth of the planetariums, and it seems they are likely to continue evolving in their second century.