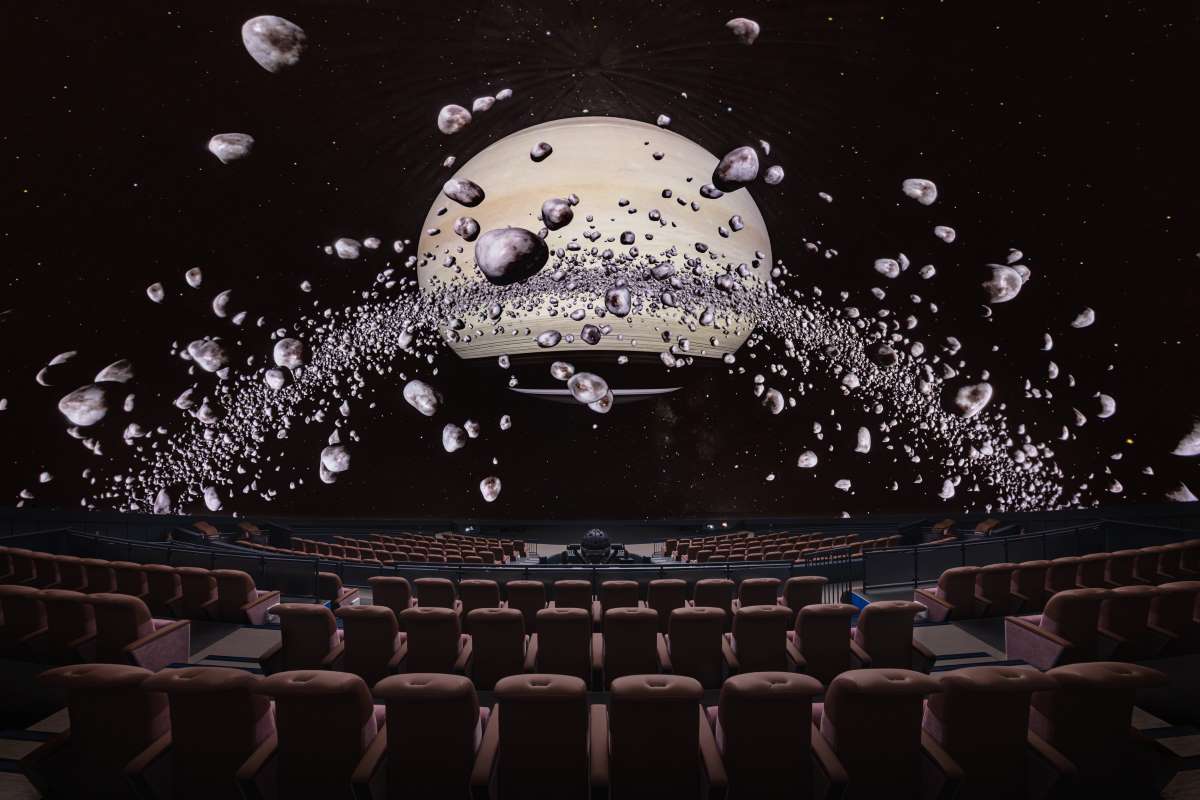 With its now-completed renewal, the Osaka Science Museum planetarium has made it possible to experience the feeling of "space travel"(provided by the museum).

In fact, Japan is also the second biggest country for planetariums in the world. Even amidst the COVID-19 pandemic, there has been much thought placed into facilities and new services.

Let’s take a look at the world of planetariums that face the new century.

As I laid back in a brand new seat and gazed up at the ceiling, countless stars emerged from the darkness. The screen moves and we plunge into space. Venus is right in front of us.

“Can you tell it’s covered in clouds?” The narrator explains. After that, we pass through the ring of Saturn, and the realistic images continue along with live commentary.

This is the planetarium of the Osaka Science Museum, in Osaka’s Kita Ward. Its predecessor, the Osaka Municipal Electrical Science Museum, was a historic facility that installed Japan’s first planetarium in 1937, 85 years ago. This spring, it was extensively renovated using the concept of “a planetarium that rows us into space.”

A 6K image with a resolution four times higher than the old museum’s version is projected onto a huge dome with a diameter of 26.5 meters. Space travel that uses simulation software is the highlight.

It’s possible to create programs based on one’s choice of which planet to visit. You can even decide how to approach and orbit the visited planet.

The number of seats has been reduced by about 50, given new considerations for preventing the spread of infection and other safety. Meanwhile, each seat has been expanded to 130 cm in length and 55 cm in width, comparable to business class in airplanes.

“With a limited budget, we cut down on the wasteful things and spent money on the necessities,” said curator Yoshiya Watanabe. “Only we, who know the planetarium well, can tell what’s necessary,” the curator added with confidence. He has been involved in the planetarium for over 30 years.

Japan’s first planetarium, which was at the Osaka Municipal Electrical Science Museum, was made in Germany. It projected about 9,000 stars as well as the planets in the solar system.

The Electrical Science Museum was opened by the City Electricity Bureau to commemorate the 10th anniversary of the electricity supply business. Originally, the plan was to have amusement facilities such as a beauty salon, a public dining room, and a skating rink.

Responding with a different idea, researchers at Kyoto University took the lead in encouraging the city’s electrical bureau to build a planetarium, saying that it was “necessary for astronomical education in Japan.” The director decided to install it during construction, and the rest is history.

“A student was sent to study not only the planetarium’s machinery, but also its production and usage,” said Mr. Watanabe. There are currently more than 1,500 planetariums in the world, but at that time, there were only about 20 planetariums in total in Germany, where they were invented, and the United States. And this planetarium was the first in Asia.

In this way, a planetarium with a dome with a diameter of 18 meters was constructed on the roof. The cost was ￥460,000 JPY ($3,500 USD), which was a huge investment at the time, equivalent to the construction cost of two or three elementary schools.

Astronomical experts were mobilized from all over Japan for the first facility in the country. The building was damaged by air raids during the war, but the planetarium miraculously survived. And the projector was in use for more than 50 years until 1989, when the museum became the Municipal Science Museum. It is currently on display there.

Why are there so many planetariums?

According to the Japan Planetarium Association (JPA), there are about 300 planetariums currently in operation in the country. This is second only to the United States.

Why are there so many?

JPA data shows that the majority of planetariums were constructed from 1970 to the first half of the 1990s. And of the 455 built (including ones that have since closed), 65% were built during this period.

It is said that planetariums spread when elementary and middle school science teachers wished for them to be built in their own town. In addition to supporting domestic planetarium makers, it was also a time when facilities for children were flourishing, and it was easy to gain the support of citizens. In fact, over 90% are public.

Recently, in addition to optical projectors, digital projectors have become widespread, and it has become possible to project images with various patterns. The shape of the domes, the symbol of the facility, are mostly horizontal or inclined. The seating arrangements include concentric circles that face the center, or a one-way style like a movie theater. A number of facilities also change their formats when renovating.

Sleeping at the Planetarium

It is not only the hardware that is being upgraded; the programming is, too.

A special project on Labor Thanksgiving Day (November 23) was proposed by Akashi Municipal Astronomical Science Museum (Hyogo Prefecture) for spectators to sleep in the planetarium. It is a program that invites a good night’s sleep, by allowing participants to bring in pillows, pajamas, and scented aromas, and fall asleep while watching the starry sky to background music.

Other planetariums have been called to hold similar events, and they are now being held at multiple facilities. In 2020, 48 facilities participated across the country, and 3,365 people enjoyed sleeping in the planetariums.

In addition, elaborate events are being held in various places to encourage their widespread use. There are programs such as “planetariums for 0 year-olds,” meant for babies, and “planetariums with subtitles” for the hearing impaired.

Indeed, planetariums are constantly evolving with their entertainment value.