North Korea and Warmbeir's Death: Japan Should Take Its Cue From Angry America 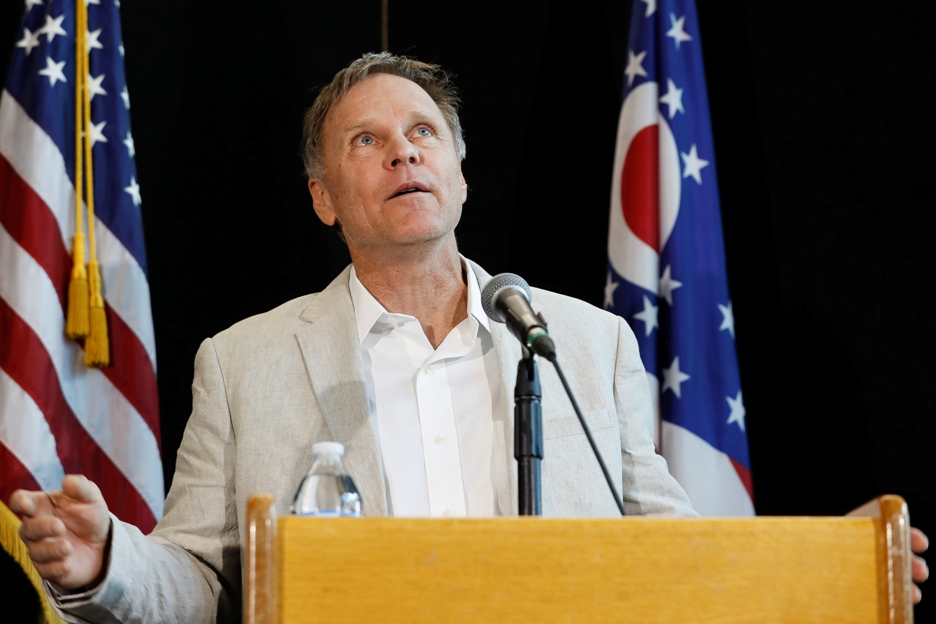 Fred Warmbier, father of Otto Warmbier, a University of Virginia undergraduate student who was imprisoned in North Korea in March 2016, speaks during a news conference at Wyoming High School in Cincinnati in June 15, 2017. (AP Photo)

The tragic death of a young American in June caused by North Korea’s unspeakably cruel treatment has further hardened the Trump Administration’s attitude toward the rogue country. It brought renewed pressure for a full investigation into the fate of another American whom it suspects may have been abducted by North Korean agents 13 years ago.

This turn of events is anticipated to infuse new purpose into Japan’s own efforts to rescue its citizens who were kidnapped by Pyongyang.
The 22-year-old American college student, Otto Warmbier, died of extensive brain damage on June 19 in a hospital in Ohio, a week after being sent back to the United States by North Korea. 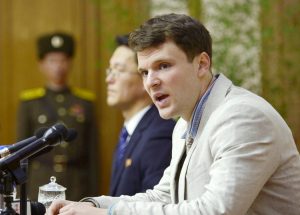 Mr. Warmbier was arrested by North Korean officials for allegedly stealing a political poster in his hotel room at the end of a tour for sight-seeing and study in North Korea. Following a mock trial, where he was not allowed any representation, he was sentenced to 15 years of hard labor in a North Korean prison camp. He was then cut off from any international contact and denied international treaty-guaranteed consular visits to check on his welfare until North Korean authorities agreed to send him home at the back-channel urging of the Trump Administration. Only then was it learned that Mr. Warmbier was in a coma and had been for some time before the North Korean decision to release him.

North Korea claimed that Mr. Warmbier had contracted botulism, a kind of food poisoning which, it says, caused him to go into a coma. However, medical examiners at the Ohio hospital did not find any evidence of botulism. Considering the nature of the injuries they found, the real cause for his brain damage was most likely acts of brutality carried out during his captivity in North Korea.

This sad development triggered widespread anger and condemnation in the United States against North Korea, both on government and public levels. President Trump, for one, stated, “The United States condemns the brutality of the North Korean regime as we mourn its latest victim.”

Secretary of State Rex Tillerson said the US holds North Korea accountable for Warmbier’s “unjust imprisonment,” and demands that the country release three other Americans it is holding prisoner for alleged crimes against the state. The US government has accused North Korea of using such detainees as political pawns. 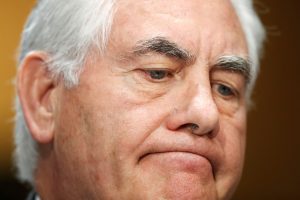 In the US Congress, senior Republican Senator John McCain said that “Otto Warmbier, an American citizen, was murdered by the Kim Jong-un regime.”

The Arizona senator further stated that “the United States of America cannot and should not tolerate the murder of its citizens by hostile powers.” Equally harsh remarks were made by many of his Democratic colleagues.

All of the US media reported on this tragedy, stressing the inhuman nature of the Kim regime. Mr. Warmbier’s parents made a particularly moving public statement, expressing sorrow over the death of their beloved son and condemning North Korea, striking a deep chord in the hearts of many Americans.

One consequence of this tragic development appears to be a significant shift in the overall US policy toward North Korea. The Trump administration from the outset forcefully denounced North Korea’s nuclear weapons development and missile adventures. After the Warmbier tragedy, it finally condemned North Korea’s oppression of human rights and began paying serious attention to the broader issue of Pyongyang’s human right abuses.

Mr. Warmbier’s death generated heightened public concern over North Korea’s unjust and prolonged detention of three other Americans, and also brought renewed attention to the case of another young American, David Sneddon, who is suspected of having been abducted by North Korean agents. In August 2004, Mr. Sneddon, then 24 years old, disappeared while traveling in China’s Yunnan Province. North Korean agents were actively operating in the area at the time, capturing the refugees from the North and their suspected sympathizers.

Later, Japanese regional experts investigating the cases of Japanese abduction victims obtained local information that five North Korean agents had been observed detaining a man matching Mr. Sneddon’s description and taking him away. More recently, a South Korean organization reported that defectors had said Mr. Sneddon was in Pyongyang, teaching English to North Korean officials there. The US State Department, however, would not open an official investigation, citing the lack of definitive, concrete evidence as the reason.

A resolution urging the US government to thoroughly investigate the Sneddon case was introduced in both houses of Congress in the final year of the Obama administration. The House of Representatives passed the resolution in September 2016, and while it was approved by the relevant Senate committee, it failed to make it to a vote in Senate before the end of the 2016 Congressional session.

Prompted by the Warmbier tragedy, a week after his death, two prominent Republican members of Congress sent a letter to President Trump on June 26. Senator Michael Lee and Representative Chris Stewart, both from Mr. Sneddon’s home state of Utah, drew special attention to the case of David Sneddon, and urged the Trump administration to carry out a full investigation.

These developments are bound to reverberate loudly in the Japanese appeal for a resolution of the cases of Japan’s own citizens abducted by North Korea.

First, if the Trump administration moves forward with a vigorous investigation into the Sneddon case, it is likely to lead to a joint US-Japan effort, possibly including other allies, to tackle North Korean state-sponsored human right abuses, particularly the abduction and detention of foreign nationals. Japanese cooperation has been evident through the sharing of information and intelligence in the Sneddon case. Japanese legislative leaders, such as Keiji Furuya, a member of the Lower House of the Diet and former State Minister in charge of the Abduction Issue, exchange information with their American counterparts, including Congressman Chris Stewart and Senator Mike Lee of Utah. They share information on the history and patterns of North Korea’s international abductions.

Secondly, the tragic death of Mr. Warmbier has prompted the families of Japanese abductees and their supporting organizations to extend renewed cooperation to the American side to fight North Korean humanitarian crimes together. The Families of Victims of North Korean Abduction (AVFKN), the National Association for the Rescue of Japanese Kidnapped by North Korea (NARKN), and the Japanese Diet’s Parliamentary League for the Early Repatriation of Japanese Citizens Kidnapped by North Korea, issued a joint public statement on June 28. The joint statement expresses condolences to Mr. Warmbier’s bereaved family, condemns North Korea’s inhumane treatment of the victim, and reviews similarities between Mr. Warmbier’s case and those of Japanese abduction victims. In both cases, North Korea’s allegations regarding the health condition or death of the victims has been demonstrated to be entirely untrustworthy.

Thirdly, the Warmbier case has independently aroused American interest in the Japanese abduction cases. For example, The Wall Street Journal, in its June 16 major article headlined “North Korea Sent Otto Warmbier Home in a Coma. Others Never Made It Back at All,” introduces the tragedy of unresolved Japanese abduction cases featuring Ms. Megumi Yokota. The article draws parallels between the Warmbier case and the Yokota case. In both cases, untrue medical explanations and fake evidence were given by the North Korean government, non-existent “botulism” in the Warmbier case and the fake cremated remains or “ashes” in the Yokota case.

OUR RELATED STORY: Warmbier is this generation’s Megumi

The death of 22-year-old Otto Warmbier is a tragedy with lasting consequences. It has sparked a new determination to use international cooperation not just to acknowledge but also to finally bring an end to North Korea’s human rights abuses. We can only hope that the 40-year-long national pain Japan has suffered, and the pain of the families of victims from more than a dozen other countries, will also soon end with the homecoming at last of all abduction victims. 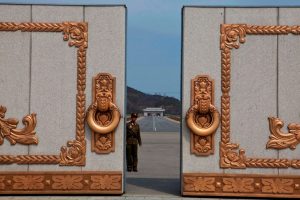 Yoshihisa Komori is Sankei Shimbun’s Associate Correspondent in Washington, DC and a professor at Reitaku University. He is also a Special Advisor to JAPAN Forward. Mr. Komori began his career as a reporter with the Mainichi Shimbun and served as its Saigon bureau chief and Washington correpondent. Subsequently he joined the Sankei Shimbun, for which he served as bureau chief in London, Washington, and Beijing. He is a recipient of the Japan Newspaper Publishers and Editors Association Award, the Japan National Press Club Award for International Reporting, and the U.P.I. Vaughn Prize for International Reporting.

Mr. Komori is also the author of more than forty books. His past academic experience includes an affiliation with Carnegie Endowment for International Peace as a Senior Associate and Akita International University as a visiting professor.