‘Press Freedom in Contemporary Japan’: A Lazy Look At the State of Japanese Media

The protesters of “conspiracy law” march at the center of Kumamoto city on June 21, 2017. Japan enjoys the Freedom of Speech. Media in Japan can report whatever they think it is important. 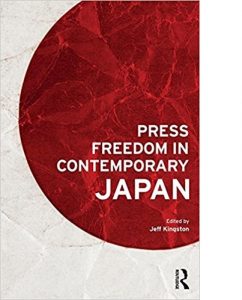 This book is not about the real state of press freedom in Japan but about the imagined lack of freedom to gather and report news, based on the allegation that these have been limited by the Abe regime. It is not a comprehensive treatment of the press, let alone the news media, in Japan.

The most remarkable feature of this book is the chapter “Abe and press oppression: Guilty, not guilty or not proven?” by Michael Thomas Cucek. It essentially debunks the claims made by the other authors, and especially those made by the editor of the volume Jeff Kingston.

Kingston cites the annual World Press Freedom Index issued by Reporters Without Borders (RWB) to claim that “between 2012–2016, during Prime Minister Shinzo Abe’s tenure, Japan plunged 50 places to 72nd out of 180 nations in the global ranking of media freedom.”

According to Kingston, behind this downgrading is the “passage of a “special state secrets” legislation in 2013 and a series of media muzzling initiatives, orchestrated campaigns of harassment, and the ousting of prominent television news anchors and commentators critical of Mr. Abe.”

Cucek points out, however, that the RWB index for Japan had swung wildly with respect to Japan, and the steep decline in ranking for the country came during the Democratic Party of Japan regime, not under Abe and the Liberal Democratic Party and was due to the management of news pertaining to the Fukushima meltdowns, not the factors cited by Kingston.


The other “evidence” that is cited Kingston and several of the other authors for the claim of a major decline in “press freedom” under the Abe regime includes:

There is no evidence presented anywhere in this book that the role of these press clubs has changed notably under the Abe regime from that prevailing in the postwar period. Weekly magazines, scarcely mentioned in this volume, regularly hound politicians and officials out of office based on investigations done by reporters who are not members of these clubs.

Criticism of the Asahi Shinbun for its decades-late admission that it had published a number of articles about the “comfort women” based on the claims of a serial liar is an issue of “press freedom” only if this concept is extended to include the “freedom” to publish bogus stories.

None of the “news anchors and commentators” allegedly harassed and ousted for anti-Abe views were reporters or journalists. As such they either presented reports prepared by others or commented on such reports.  Their “ouster” does not in and of itself mean a change in the content of the news that is presented or the issues that are investigated.

Only one has claimed pressure but he has failed to produce the proof  of “bashing,” which he claimed happened he had experienced prior to throwing a tantrum on live television in which he held up a card that said, “I am not Abe.”

Hiroko Kuniya has given no support to the speculation that her contract to host the Close-up Gendai current affairs program on public broadcaster NHK was not renewed because she had dared to ask Chief Cabinet Secretary Yoshihide Suga questions about the Abe regime’s reinterpretation of the Constitution. She has not claimed political pressure in subsequent interviews or in an autobiographical account of her 23 years hosting the program.

Michael Cucek and David McNeill both note that age and ratings were against her and that there had been speculation for some years that NHK wanted to dump her and revamp the program. More important, Kuniya does not describe herself as a journalist. Her own term is “caster” (キャスター) or “newscaster.” She was never a journalist out looking for stories.

The regular NHK news staff in Tokyo, and on occasion in regional centers, actually produced the content. Thus, there is  no basis for leaping to the conclusion that without her the “quality journalism” that the program represented has been lost.

The program was “renewed” and moved to a different time slot. Because the “renewed” Close-up Gendai was being broadcast well before this book was published, it should have included a comparison of the two versions. Transcripts and recordings are readily available for both versions. None of the contributors to the book did this. There is no evidence that they even considered the possibility.

The chapter by Larry Repeta repeatedly asserts a chilling effect because of Japanese law because of the penalties the courts can levy against defendants. No reader, unless he or she is a lawyer with specialized knowledge in this area, will be able to judge whether libel and defamation laws in Japan are singularly favorable to plaintiffs and that the judgements against defendants are singularly harsh.

Britain would have been the obvious comparison because it is known both for its press freedom and the ease with which defamation suits are brought and the large judgements that are awarded.

The chapter “Japan’s designated secrets law” by Arthur Stockwin also lacks comparison. It is essentially half a summary of an article by Larry Repeta that is not part of this volume and half a summary of comments by Sota Kimura, a Japanese expert on security law and a critic of Shinzo Abe.

Kimura, in fact, does not see the law as a threat, and notes that it did not originate with the Abe regime. This does not stop Stockwin from concluding that it “creates serious obstacles to investigative journalism.”

Rather than repeating the readily available views of Repeta, Stockwin should have introduced the highly contentious debate on security legislation in the UK to say nothing of the demands the UK government made on The Guardian for publishing Snowden material.

At least half the material in this book has only the most tangential relation to the nominal subject, including all articles in  Part V (“PR, public diplomacy and manipulating opinion”). Here, Kingston appears to be using this book to give himself and like-minded contributors a venue for the anti-Abe opinion pieces of the type he regularly publishes in the Japan Times and elsewhere.

Cutting the gratuitous anti-Abe cruft and undocumented assertions would have provided space for serious comparisons that would let readers understand what is happening—or not happening—in Japan. Ultimately, only the article by Michael Cucek warrants an unequivocal “must read” recommendation.