The escalating war of words between United States President Trump and Kim Jong-un, the hereditary dictator of North Korea, is making a dangerous situation worse. We cannot afford to dismiss it as a schoolboy “Yah-Boo” quarrel. There is a real danger that an incident involving a ship or an aircraft could lead to retaliation in which hostilities spread. If restraint  were not shown by all involved, a world nuclear conflagration could be ignited. 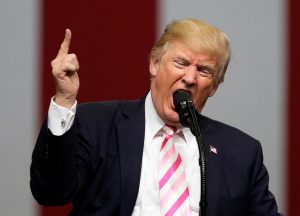 Kim Jong-un is determined that North Korea, which has put great efforts into developing nuclear and missile capabilities, should develop thermonuclear devices capable of being delivered by intercontinental ballistic missiles at targets in North America. Having noted the fate of Saddam Hussein in Iraq and Mohammed Gadhafi in Libya after giving up on the development of nuclear weapons, he sees such development as necessary to ensure his personal survival and that of his regime. He is apparently indifferent to the suffering which his misuse of resources inflicts on his own people and is adamant that he will not be forced by economic sanctions to give up on his nuclear ambitions.

The Americans and President Trump in particular are determined that North Korea should not become another nuclear power, not least because of the hostility displayed by North Korea to America, Japan, and South Korea and the fear that Kim Jong-un could precipitate a nuclear conflict.

Diplomatic negotiations involving China, Russia, Japan, and South Korea have been tried without success, and the Americans have declared that the time for talking is over. President Trump even publicly rebuked his Secretary of State for trying to keep open an indirect diplomatic channel to the North Korean regime.

In recent months, in the light of nuclear and missile tests, the emphasis has been on ramping up economic sanctions. These too have not yet been successful. The Chinese, who have the only land border with North Korea, have stepped up pressure on the North Koreans but are unwilling to take the ultimate step of cutting off oil supplies to North Korea. They fear that, if as a result the North Korean regime were to implode, there would be a flood of North Koreans into China and chaos in the peninsula, which could lead to China having a land frontier with a capitalist Korea in alliance with the United States, some of whose forces would be on their border.

President Trump has not ruled out a military solution. An attack on North Korean nuclear and missile facilities backed by US naval power could inflict serious damage on North Korean capabilities, although it is doubtful whether all facilities, some of which are buried deep in the mountains, could be destroyed before the North Koreans could launch counter-attacks. These would consist at the least of a North Korean bombardment of Seoul, which is close to the border with North Korea, and would inflict vast casualties and damage.

Assuming that North Korea has nuclear devices ready and hidden, one or more of these devices might be used to attack an American target, such as Guam, or a target in South Korea or Japan. A military solution is a nightmare scenario. Unless it had been pre-authorized by the United Nations Security Council it would also be contrary to international law.

If talks are ruled out as useless, economic sanctions won’t work, and a military solution too horrible to contemplate, does the world have to accept the existence of a new nuclear armed state and rely on the doctrine of mutually assured destruction? This doctrine declares any state which uses nuclear weapons first faces annihilation. MAD has so far been effective because world leaders of the known nuclear armed states (the US, the United Kingdom, France, Russia, China, India, and Pakistan) have shown that however ambitious, egotistical, and irrational leaders of some of these states may from time to time  be, self preservation comes first.

To accept that the only alternative to a war, which could become a world conflict with devastating consequences, would be to accept the existence of another nuclear power sets a precedent for other states with nuclear capabilities to develop atomic weapons and declare themselves nuclear states.

One such aspirant is Iran, which poses a threat to the existence of Israel and the possibility of achieving any peace settlement in the Middle East. Many believe that Israel already has access to nuclear weapons. There are other states with the capacity to develop nuclear weapons, and their leaders may feel that the only response to nuclear proliferation is to develop such weapons for themselves. This is an appalling prospect and every effort must be made to avoid it.

It is not yet, however, certain that economic sanctions, if ramped up, might in the end at least bring Kim Jong-un to agree to take part in a meaningful set of new negotiations. If talks were eventually to be held there would need to be carrots on offer as well as sticks in the background.

Deciding on the carrots to offer will be difficult. Could they include guarantees on force levels and armaments in the peninsula? Should economic incentives be proposed to relieve poverty in North Korea? Could the North Koreans be induced to have more contacts with the outside world which could make the country less inward-looking? Optimistic perhaps. Any new talks with North Korea would be frustrating and test the patience of all involved, but they should not be ruled out. “Better,” as they say, “jaw-jaw than war-war.”

Nor should we yet conclude that economic sanctions are doomed to failure. The latest set of sanctions approved by the UN Security Council may be more effective than we think. It may also be that, after the Chinese Communist Party Congress, President Xi will be willing to do more to make them effective. American pressure on President Xi—for example, through threats of a trade war could—however, be counterproductive unless handled with a sensitivity not so far shown by President Trump.

Japan does not have much, if any, leverage with the Chinese, but Prime Minister Shinzo Abe claims a close relationship with President Trump. He should continue to use this to reaffirm the US commitment to Japan’s security and to restrain President Trump from unnecessary and provocative statements and actions.

Japan faces difficult issues over North Korea. North Korean kidnapping of Japanese young people off its shores decades ago has understandably not been forgotten and contacts with North Korea have been problematic at best.

Should Japan try to intercept and destroy North Korean missiles flying over Japanese territory? Would such interception be lawful? For the present, at least the Japanese government and its forces would be wise to exercise patience and extreme restraint.