Now there's a Japan-US Taiwan Contingency Plan, but Will Tokyo Be Ready? 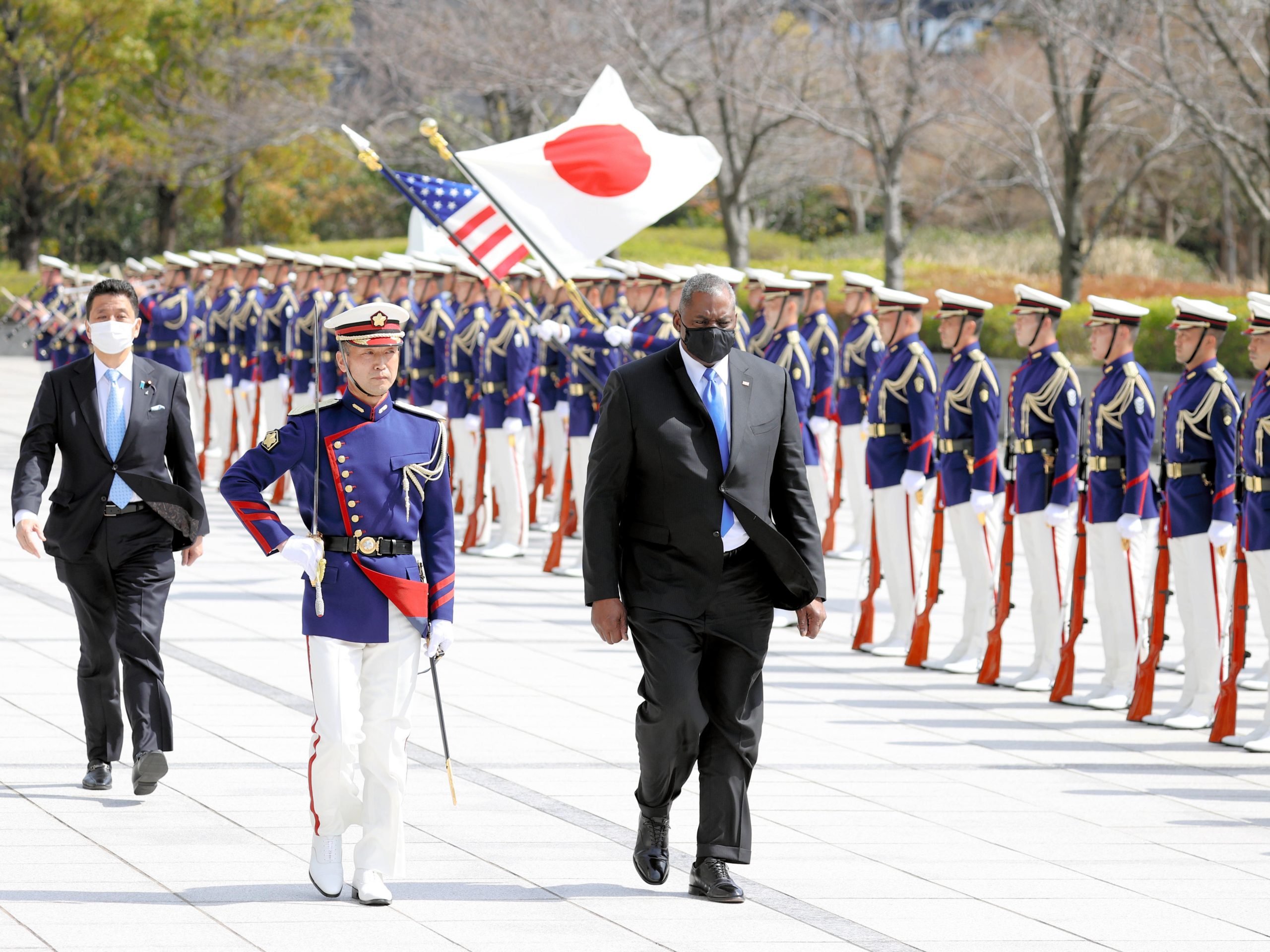 US Secretary of Defense Lloyd Austin in the foreground, Japanese Defense Minister Nobuo Kishi in the background.

The Kyodo News reported the other day that the US and Japanese militaries have written a draft plan for a ‘Taiwan contingency’ – and may soon draw up an “official” plan. The uninitiated might think the Americans and the Japanese are finally going to buckle down and develop a real joint operational plan to handle a Taiwan contingency.

However, after spending a few decades observing the trajectory of Japan’s defensive capabilities, it’s easy to become a glass half-empty kind of guy. And a closer look at the plan – something that should have been in place years ago – doesn’t exactly inspire excitement.

According to the report, the plan would be set in motion once the Japanese government declares the situation around Taiwan to be serious enough to “undermine the peace and security of Japan.”

Once that happens, US Marines are allowed to set up an “attack base” somewhere along the Nansei Shoto – also known as the Ryukyu Islands chain, which includes the island of Okinawa – that stretches from Kyushu almost to Taiwan. This would be a first as the Marines are barely allowed to operate on Okinawa – even in peacetime.

Japan’s role? According to the news story, the Japanese will provide logistical support – including ammunition and fuel. If so, Japan will need to start buying HIMARS missiles of the sort the Marines use. One suspects the JSDF hasn’t received that order yet.

So, Tokyo permits the Marines sally forth to do battle with the Chinese threatening Taiwan ー when the Japanese decide it is time. And Japan apparently doesn’t have to join the fighting.

Almost inadvertently, the Kyodo report raises fundamental questions about the impediments to what actually needs to be done for Japan and the US to defend Taiwan, each other, and themselves.

For example, sending out a US Marine missile battery or two isn’t a contingency plan for dealing with a Chinese move against Taiwan.

Rather, a proper operational plan requires melding the full resources and capabilities of US forces and the Japan Self-Defense Force ー not just sending out the Marines. And even a detailed plan is still just a plan. If forces don’t train and exercise for the plan – they might as well not bother.

The US side is well aware of this. Whether the Japanese side is, is another question.

Additionally, one imagines that if and when serious planning takes place, the US and the Japanese militaries may come at the problem from two completely different directions.

Whereas the Americans are interested in stopping the Chinese invasion of Taiwan ー and that means killing PLA troops ー the Japanese may be more concerned with defense of the Nansei Shoto and Japanese territory ー and avoiding as much harm to anyone as possible.

And other reasons not to hold one’s breath about the plan having real world effects anytime soon is the Japanese still need to study revising laws to permit the Marines to deploy. And then they will have to actually pass the laws.

And Tokyo also needs to study and pass laws and/or regulations that lay out when an event involving Taiwan threatens Japan’s “peace and security” enough to let the aforementioned laws kick in.

And don’t forget the debating that will take place over all this – slowed by lobbies of all sorts.

Such things do not move quickly in Japan at the best of times.

One fears the Taiwan matter may be resolved one way or another before Japan has the legal structures in place that allow an operational plan to be implemented.

And if the Chinese don’t cooperate and patiently wait for Tokyo to get things in order before making their move, the US and Japanese response will be haphazard and ad hoc. Not exactly a winning approach.

One retired Marine who is well aware of how things work in Japan noted on reading the Kyodo report:

“Imagine the hand wringing that will ensue just to provide (the Marines with) some battle space, some fuel, and moral support.”

Another former Marine who worked closely with the Japanese military for many years noted:

“This plan seems a good start, but it falls far short of the operational command structure required for the US and Japan to properly fight together in a Taiwan or other contingency.”

What is he talking about?

The Japan-US Defense Guidelines were revised in 2015 and allow Japan and the United States to do whatever is necessary to establish genuine operational linkages – for both planning and peacetime and wartime operations.

Specifically, the Guidelines call for an “alliance coordination mechanism” (ACM) but don’t actually say what one is. One fairly thinks an ACM is at least a building with people in it who do alliance coordinating.

But six years after the Defense Guidelines revision (and 60 years after the Japan-US defense treaty was signed), is there a standing, permanently staffed joint headquarters in Japan where the JSDF and US forces handle the defense of Japan – to include a potential Taiwan contingency?

Now that would be news – and maybe even more momentous than drafting a plan full of caveats.

In fairness, ten years ago nobody in Tokyo would have dared to talk about an operational plan for Taiwan – or hardly even one for Japan. But overall US-Japan defense preparations are still nowhere near where they need to be – other than between the two navies.

One suspects that the Kyodo News story is part of a messaging effort by some part of the Japanese government rather than a sign of a serious desire to improve urgently needed bilateral operational capabilities.  Such is the Japanese approach to things. The pro-forma over the substantial.

Tokyo is sort of saying….”I’ve got this really big friend who’ll hurt you if you come after me (or my neighbor).” There is, of course, no reason Japan can’t send away for the Charles Atlas bodybuilding course.

There are Japanese who understand this. They won’t mind if the Americans point this out.

Grant Newsham is a retired U.S. Marine and a former diplomat and business executive who spent many years in Asia. He is a senior fellow with the Center for Security Policy. Find other articles and insights by Mr. Newsham on JAPAN Forward at this link.