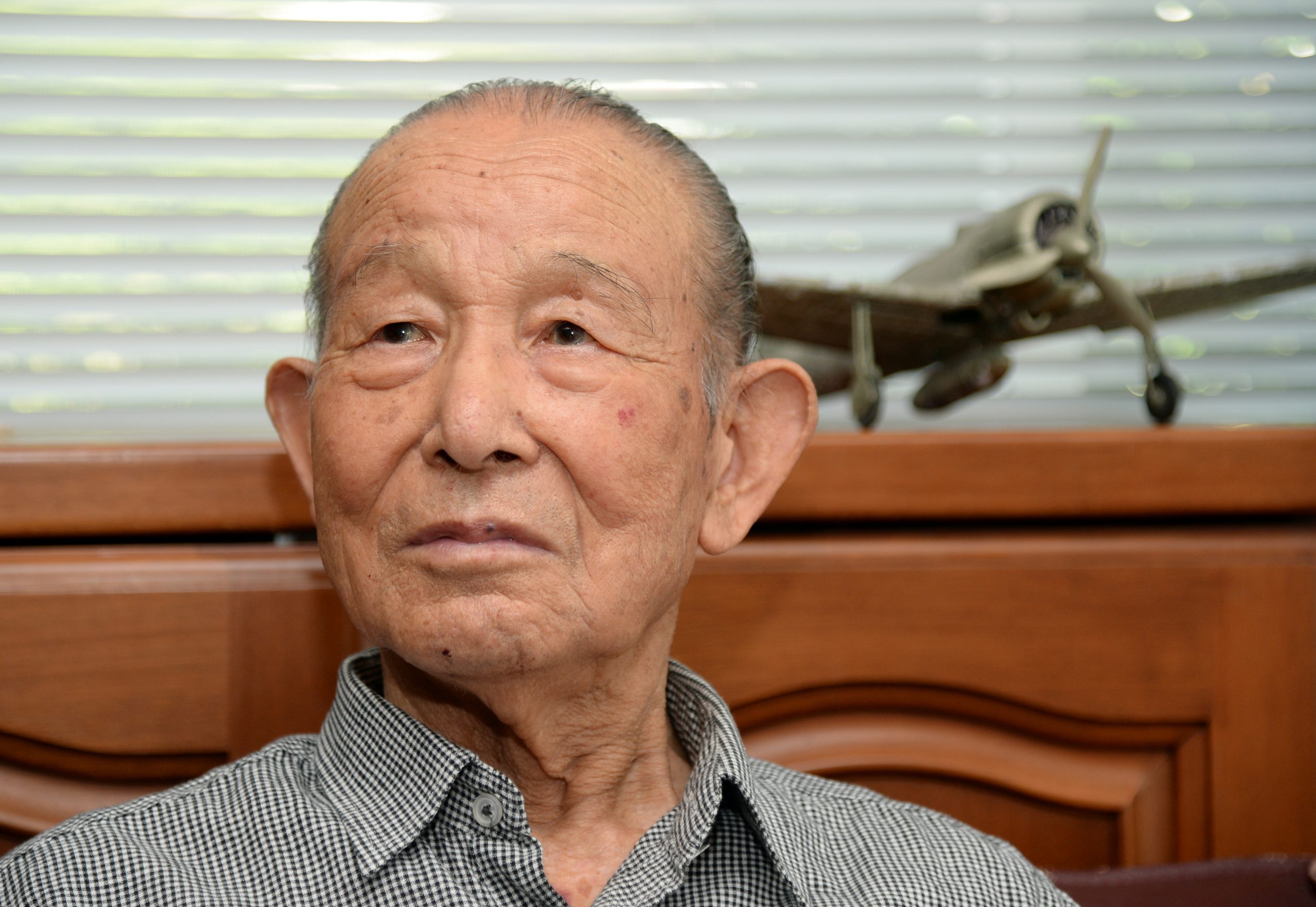 Former Naval Air Corps ensign Minoru Honda, who encountered the atomic bombing of Hiroshima as he flew past the city, died on October 3, 2021, at the age of 98.

We met at his home in Otsu city, Shiga prefecture when I interviewed him for a story on the 70th anniversary of the war, and that was the beginning of our relationship. May he rest in peace.

Honda trained to become a Naval Air Corps fighter pilot and earned many accolades for his skilled flying. He made his name in the WWII  battle of Rabaul (New Britain Island, Papua New Guinea) in 1943-44, after which he was known as the “ace of aces”.

He confronted the American B-29 Superfortresses In the battle for defense of the Japanese mainland, while flying upside down, and 70 years later he vividly explained what it was like in an interview, moving his hand like he was  holding the control stick, as if it was just a few hours ago.

It is little known that he was the only known Japanese pilot in the sky at the time of the Hiroshima bombing.

A Birds Eye View of the Bombing of Hiroshima

At 7:45 am on August 6, 1945, 22-year-old ensign of the 343rd Naval Air “Tsurugi” Corps, Minoru Honda climbed into his brand new Shiden Kai fighter plane at Kawanishi Aircraft Company in Himeji City, Hyogo Prefecture, and took off for the Omura Imperial Naval Base in Nagasaki Prefecture.

He was flying at 5,000 meters, with the blue sky stretched out ahead and the cityscape of Hiroshima City with its national treasure, Hiroshima Castle, below. It was at that moment that the Shiden Kai was blown away by a powerful force and he lost control.

While desperately working to stabilize the aircraft, he was shocked to see the scene below.

“There’s no city!” Honda recounted. The entire city of Hiroshima had disappeared. There were only 6 tilted utility poles, and all the rest was debris. There was no flame or smoke.

Eventually, he said, white smoke rose at the center of the city, which had turned red and black. The smoke rose rapidly into a huge mushroom cloud.

“Did the armory explode?” Honda asked himself.

After arriving at Omura Air Base, he immediately reported what he had witnessed to the headquarters, but the officers there had no information, either.

In reality, it was an atomic bomb.

The B-29 bomber Enola Gay had dropped Little Boy, a uranium-type atomic bomb, from an altitude of 9,600 meters above Hiroshima, and then turned sharply to escape. At 8:15 A.M. Little Boy detonated about 600 meters above the city with a flash and heat waves, followed by a supersonic blast.

What Honda had seen was the city of Hiroshima, which had burned to the ground and become hell on earth as a result of the blast.

Two days later on August 8, Honda learned that a new U.S. military bomb had been dropped on Hiroshima. The following day, the same tragedy struck Nagasaki City, 15 kilometers southwest of Omura Air Base, across Omura Bay.

At 11:02 A.M. on August 9,1945, another B-29 bomber called Bockscar dropped Fat Man, this one a plutonium-type atomic bomb, into Nagasaki City. The original target was Kokura, now known as Kitakyushu City, but due to poor visibility the target was changed to Nagasaki.

As in Hiroshima, no air-raid warning was issued. And no information about an approaching enemy aircraft was given to Omura Air Base.

Honda was having an early lunch when suddenly the dining tent shook violently, and the army base was in an uproar. He was promptly given orders.

All of the hospitals in Nagasaki had been destroyed in the attack. Honda and 20 others headed out to bring the wounded to the Omura Naval Hospital in freight cars, as ordered.

When a freight car arrived and the door opened, there were dozens of people lying on the floor, but they were hairless and naked with their skin burned black. It was impossible to tell who was a man or a woman as their facial features had been destroyed, and difficult to see if they were even breathing.

Determined to take them to the hospital anyway, Honda said, “I lifted the arms of one to put him on the stretcher, but the flesh slipped away, leaving only the bare bone.”

Honda had flown the Zero fighter in various battles in Indonesia, Truk Atoll (currently Chuuk Lagoon), and Rabaul since the start of the war against the United States in 1941.

In the Battle of Guadalcanal, he made a sortie shortly after appendix surgery, and even continued fighting while holding down the intestines sticking out of his stomach.

After he was assigned to the elite Tsurugi unit in the mainland defense, he took on the B-29 bombers that made the skies black with their large formations and managed to shoot down several. He also lost many comrades at that time.

Despite being such a battle-hardened soldier, Honda was overwhelmed by the atomic bombs. “What kind of hell is this,” he commented.

Colonel Minoru Genda, the commander of the Tsurugi unit, told Honda, “If I get any information about the new bomb, next time I will stop it, even if it takes ramming into it. Will you sortie with me then?”

“It would be my honor,” replied Honda. But the opportunity never came. It was August 15, and the war ended.

After the war, Honda worked for the Japan Air Self-Defense Force and Mitsubishi Industries, and continued flying as a test pilot.

“Even now, at the age of 92 (at the time of the interview), I still remember the tragedy of Hiroshima and Nagasaki. And I will never stop regretting not having the chance to sortie towards that nuke-equipped bomber.” Honda said.

“I’m really sorry for the people of Nagasaki, even though we (the Tsurugi mainland defense unit) were so close, we were unable to save them” he continued in tears.

“A war should be a battle between militaries. That’s why dropping atomic bombs above the cities was not war, because it was aimed at civilians.”