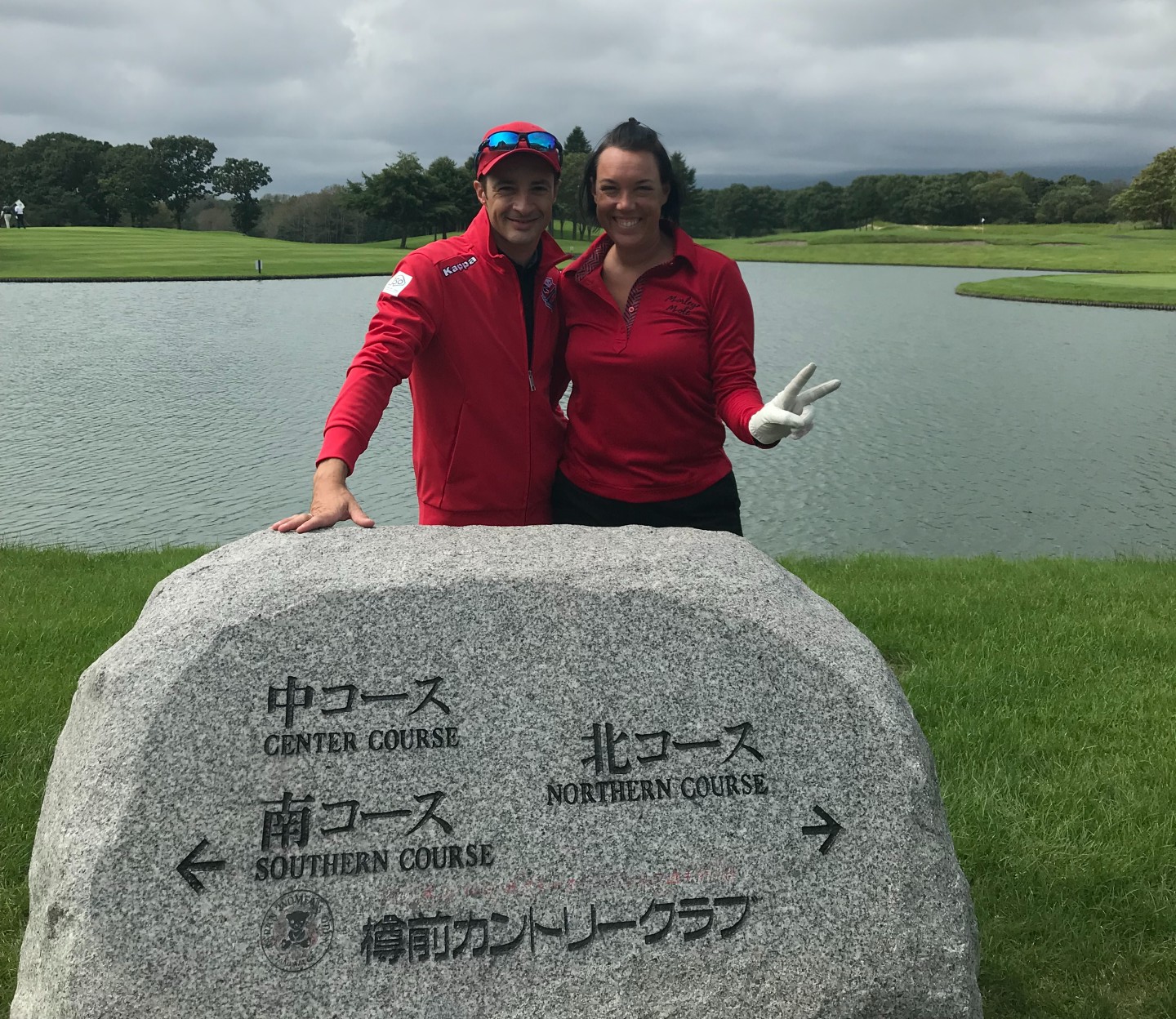 Christophe Lemaire, one of the world's greatest active jockeys, enjoys the thrill of competition. He's an ultra-competitive guy. It's in his blood.

But away from the day-to-day grind of riding horses, Lemaire also enjoys a slower-paced leisurely pursuit like many of his fellow jockeys.

Golf is one of Lemaire's chief interests when he's not working.

In a recent interview with the affable French jockey, the pastime that triggers joy and frustration, curse words and friendly wagers, among other actions, the subject of his love of golf provided an interesting contrast to his insightful thoughts on his successful career on the track.

He strives to hit the links once a week, often doing so in Kyoto, where he resides.

While on the course, the pressure of his job is he furthest thing from his mind.

"The sakura starts to bloom, so it's very nice and makes you refreshed," he said of playing golf during a certain stretch of days in the spring.

"I'm still an average player," he told JAPAN Forward, "but when I play with my wife [Barbara], we count the points [the 18-hole scores], but there's no big competition. It's just to enjoy and hit the ball."

Lemaire enjoys a different vibe on the golf course when he's competing with his racing colleagues.

"When I play with the fellow jockeys, it's more competition," said Lemaire, who rode Cafe Pharoah to victory in the February Stakes, the first Grade I race of the 2021 Japan Racing Association season on February 21 at Tokyo Racecourse.

What's a normal score for the 41-year-old for one round of golf?

He laughed when mentioning he normally shoots between 95 and 100.

"Ninety-five is a very good day for me," he blurted out before I peppered him with more questions.

Busy establishing himself as a premier jockey throughout the early years of the 21st century, Lemaire didn't play golf. Other activities consumed his free time.

But that changed when he moved to Japan to race on a full-time basis six years ago.

For Lemaire, golf became an important activity connected to his chosen profession.

"Compared to the other jockeys, I was very late," he said, "because these guys in Japan they start to play at 18, 19. But in France I had no time to play golf and I was not very into playing golf. But here in Japan, it's kind of a social link to play golf. You play with the owners, with the trainers, with the jockeys, and during the week you have more time to practice and to improve..."

Upon his arrival in Japan for full-time racing, Lemaire was invited to play golf every week.

"I was very, very bad and a low-class player," confessed the jockey who rode Almond Eye throughout her storybook career. "So I couldn't stand to keep this level, so I really got involved in golf and took some lessons and I went to the practice many times, and now I'm getting better."

As he makes gradual improvement in golf, Lemaire has a target in the back of his mind: consistently shooting a round in the 80s.

He realizes, though, that patience is important. Big improvement is something he doesn't expect to happen overnight.

He's played numerous times at golf courses in the Sapporo area in the summer months when the Japan Racing Association holds a number of events in Hokkaido Prefecture to escape the heat in Honshu and elsewhere.

"We have plenty of time to play golf, and the owners in Sapporo and Hokkaido like to invite jockeys and we play golf with them," Lemaire noted.

Throughout the year, he frequently plays at Funayama Golf Course, which is 15 minutes by car from his home in downtown Kyoto.

And how did Lemaire describe his home golf course?

"It's stuck in the middle of the mountains with beautiful Kyoto views, and you are in full nature,” he commented. “It's really good."

Even during his favorite pro soccer team's down years earlier this century, Lemaire remained a loyal Paris Saint-Germain fan.

For the Ligue 1 club with a rich history of success, the years 2000-10 were not defined by glorious results that thrilled its supporters and sparked euphoria.

Instead, Lemaire endured what he described as "quite bad times."

"It was quite tough to be a Parisian supporter," he added with a good-natured chuckle. "But since Qatar [ownership] got involved with the club [in 2011] and could get good players and have good results, it's easier [to root for the team]."

As a kid, Lemaire’s father, Patrice, who also worked as a jockey, introduced him to many pro soccer players, including friends who played for PSG.

Fernandez, an avid horse racing fan, was “good friends with my father when he was young, and we kept in touch because we used to see him at the racecourses in Paris, and even here in Japan sometimes I call him or he calls me, so Paris Saint-Germain was always my favorite team, even as a kid.”

Not surprisingly, Lemaire is eager to follow the team's results in the ongoing Champions League. (PSG reached the quarterfinals, facing Bayern Munich at the time of this writing.)

In addition to his lifelong passion for PSG, Lemaire also maintains a keen interest in hip-hop music, especially old-school rap jams from the 1990s. Ice Cube, Notorious B.I.G., Cypress Hill and Snoop Dogg are among his favorite artists. French rap groups NTM and IAM also occupy positions at the top of the list.

Do hip-hop tunes help Lemaire get "fired up" before work?

"Yes," he confirmed before adding, "I can say that I was the one who brought the music into the jockey room in France and in Japan as well."

One day, Lemaire carried speakers into the jockey room in Japan. He now keeps them for use next to his locker.

Music is an essential part of his pre-race routine.

"For me, no music, no life," he declared. "It's kind of a motivation. I need to hear some music."

Though not a disc jockey or master of ceremonies by trade, Lemaire knows his jockey-room sounds could be a distraction to other jockeys, so he doesn't blast the music at high decibels on his stereo.

"Of course I don't play it loud, like crazy, like a disco," Lemaire stated. "I got some respect for my teammates, and, for sure, they don't like the same music I like, so I don't want to disturb them or annoy them."

Disturbances or annoyances on the racetrack are, of course, a completely different thing. Great jockeys often frustrate their foes.

And Christophe Lemaire is a brilliant rider. Through Sunday, April 11, Lemaire is No. 1 among JRA jockeys in wins (57) this season. He's ridden in 236 races to date.

Editor's note: An upcoming column will explore Christophe Lemaire's approach to racing and showcase insights about his distinguished career, including thoughts on now-retired legend Almond Eye's great combination of power and speed.