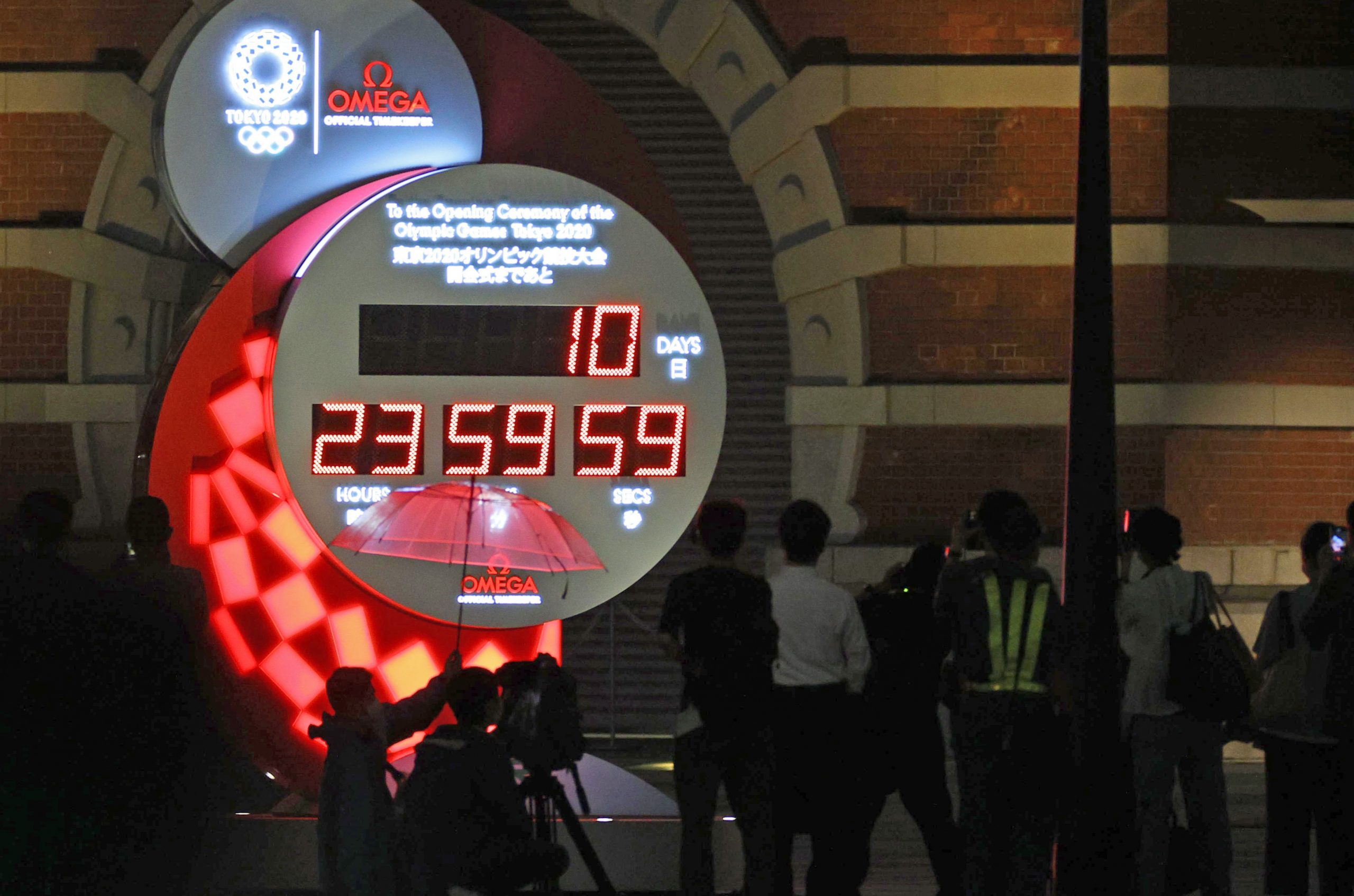 The start of the Tokyo Olympics is just days away.

Almost nothing has gone according to the original plan for the Tokyo Olympics.

And it reminds me of an old adage: “Man plans and God laughs.”

It’s been more than 2,800 days since September 7, 2013, when International Olympic Committee members voted to award the 2020 Summer Olympics to Tokyo. Celebrations took place in Buenos Aires, where the votes were tallied, and throughout Japan.

There was a general sense of excitement here, with the opportunity to build off the legacy of the 1964 Tokyo Olympics (new venues, new infrastructure, a national revitalization) and create a new legacy.

In theory, both ambitious goals were definitely possible. Now, I’m not so sure.

But the finish line is within clear sight: There are just a few days (seven to be precise) until the first Olympic events start.

The Tokyo 2020 bid committee’s original plan has been altered so many times ー both subtle changes and wholesale overhauls ー that it’s nearly unrecognizable. A compact plan for the locations of venues changed radically. (In reality, it should’ve just been called the Japan Olympics, with events scheduled more than 600 miles, or about 830 km away, in Sapporo.)

After Masato Mizuno, the CEO of Tokyo 2020 bid committee, stepped out of the spotlight and retired after the successful bid, leadership of the Tokyo 2020 Organizing Committee that followed its predecessor has appeared a meandering mess at times ー like too many chefs in the kitchen, the recipe lacks distinction. The original National Stadium design was scrapped, a new Olympic logo was needed. (Mizuno had detectable gravitas during his leadership stint that hasn’t been effectively replaced.)

And that was before the global COVID-19 pandemic began impacting every aspect of our lives.

The Tokyo Games get underway on Wednesday, July 21, two days before the Opening Ceremony at the New National Stadium. I think a lot of people are tired of hearing about the approaching date, while others are happy for any distraction from the comprehensive news 24/7 about the pandemic, COVID-19 statistics, the latest state of emergency, and Japan’s vaccination efforts.

The global spectacle, sans fans in the stands, kicks off with a trio of opening round women’s softball matches (Australia vs. Japan, Italy vs. United States and Mexico vs. Canada) at Fukushima Azuma Baseball Stadium and six women’s soccer matches (Great Britain vs. Chile, Japan vs. Canada, China vs. Brazil, Zambia vs. Netherlands, Sweden vs. United States and Australia vs. New Zealand) in Hokkaido, Miyagi and Tokyo prefectures.

Two days later, the acoustics and visual backdrop at the New National Stadium will be nothing like artistic directors and others involved in planning for the Opening Ceremony would face at any other time. In other words, unique challenges to create something that looks and sounds appealing. What’s more, what is the fine line between subdued festivities and a spirited start that they should strive for?

Does the world really want to celebrate in a big, bold way right now?

Will the Olympics be a good distraction from the nonstop news coverage of the pandemic, especially regarding the action in the 33 sports in the 339 events at 42 competition venues?

But sports events are usually communal gatherings, so this era’s Olympics will be defined a lot by how people consume live events in their homes, in social media threads, to and from work on their smartphones, or whenever they can squeeze in a few minutes to tune in to events ranging from karate and sailing to baseball and badminton.

From well-known sporting heroes such as all-time great gymnasts Simone Biles and Kohei Uchimura and baseball standouts Masahiro Tanaka and Yoshinobu Yamamoto to relative unknowns, the human drama will be compelling and unpredictable. There’s something special about the pursuit of excellence that stretches to all corners of the globe.

After all, every gold medal should be recognized as a big deal.

Every Olympian should be celebrated, too.

“This time, we have had a good opportunity to think deeply about what these Olympics are for and for whom,” Eiko Konno, a resident of Ofunato, Iwate Prefecture, was quoted as saying. “I want the Games to be held for the sake of the athletes.”

Will the Games Feel Normal?

But what will this summer’s celebrations look and feel like?

In Japan, alcohol sales at restaurants and bars are being cut off at 8 p.m. in the nation’s capital due to the latest state of emergency, the fourth one for those keeping track, and liquor often accompanies celebrations in pubs and eateries. Nighttime social gatherings in the Tokyo metropolitan region will be severely reduced because of the SOE.

You don’t need beer, wine and cocktails to celebrate or socialize, of course, but spirits accompany hanging out with friends and loved ones in normal times.

How normal can the delayed Tokyo Olympics be?

No one can really say for sure.

Yeah, somewhat. But the interactivity of social media and the internet is also fueled by on-the-scene accounts of the fan experience. The same is true for music concerts and movies, helping spread the word that people saw something cool, amazing … the best-ever (fill in the blank), etc. and the person sitting in the row in front of them felt exactly the same way.

Tokyo 2020 organizers and JOC and IOC officials certainly want to capitalize on the ability to harness the power of sport and online communities to help people feel they are a part of something big, something special, something, ahem, a once-in-a-lifetime experience.

The Olympic app, launched just a few weeks ago, is a useful tool to connect fans and enable them to interact, share their excitement about competitions, upset victories and world records. But a letdown factor will emerge, too.

Countless people are disappointed by the fact that they won’t be traveling to Japan to see the Summer Olympics after Tokyo 2020 organizers barred overseas spectators from attending events. There is also regret in Tohoku, which had planned for years to show the world how much recovery has taken place since the March 2011 disasters. Now with overseas visitors not having a chance to attend Olympics events in Miyagi and Fukushima prefectures, the disappointment is immeasurable, many local residents will tell you.

After all, the message of the Tokyo 2020 bid (the “Recovery and Reconstruction Games”) was predicated, and emotionally tied to, a mission of recovery for Honshu island’s northern prefectures.

On the bright side, U.S. First Lady Jill Biden will attend the Opening Ceremony. But President Joe Biden will not be there.

“We’re well aware of the careful preparations, including the public health measures necessary to protect athletes, staff, and spectators, that the government and international committee has undertaken, which is why, as we said, we support the Games moving forward,” White House press secretary Jen Psaki said on July 13.

“You have managed to make Tokyo the best-ever prepared city for the Olympic Games,” Bach was quoted as saying by The Associated Press. “This is even more remarkable under the difficult circumstances we all have to face.”

The world’s opinion is divided, including many people strongly opposed. But the world will be monitoring the Olympics every step of the way, from now until the Closing Ceremony and beyond (and let’s not forget the Paralympics, starting on August 24), to see if and how COVID-19 is traced to Japan from travelers returning to their home countries. It will likely be a remarkably difficult PR campaign to convince people that Bach is correct.

For these Olympics to be a success, Tokyo will, in fact, need to be the best-ever prepared city.

And that would truly be something to celebrate.