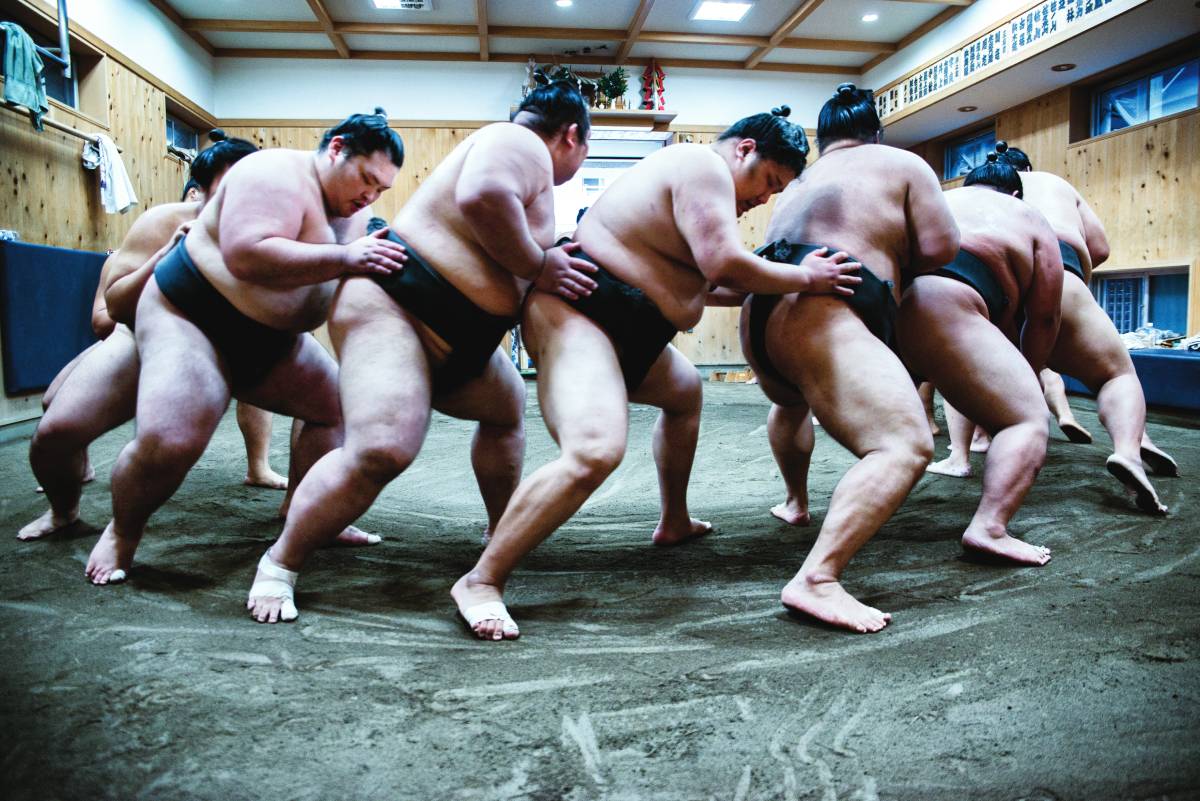 Rikishi at Tokyo's Kise beya go through a final drill to wrap up training. (Lord K2)

In multiple ways, professional sumo is unlike any other sports in contemporary times.

The schedule ― six grand sumo tournaments, each of which is held for 15 consecutive days, every other month ― is unique. Think about that for a moment. Professional soccer and basketball players, for instance, never have 15 straight days of games.

In addition, Japan is the one nation where sumo is contested as a professional activity year after year. In the birthplace of sumo, the sport's rich traditions are frequently on display in popular culture and mass media. But news coverage of present-day sumo wrestlers plus symbols and rituals of the ancient sport are less likely to be seen elsewhere.

Fortunately, photographer Lord K2 (aka David Sharabani) has filled a void by capturing the essence of the sport in his new bilingual coffee-table size photography book, Sumo (Ammonite Press, 2022).

It was an ambitious undertaking, one that highlights the ferocious action in the dohyo, intense training sessions at sumo stables and normal daily activities. For example, a snapshot from behind of a sumo wrestler waiting at a McDonald's counter for his order.

"What I was most interested in was delving into the lives of the wrestlers behind the scenes," Lord K2 says in a video book trailer.


Sumo: A Book of Compelling Photos

In vivid, striking images, Lord K2 gives more than a quick glimpse of the world of sumo. He pulls back the curtain, letting us see what happens beyond the daily tournament matches among sumo's top stars, such as Hakuho, the Mongolian-born legend who retired in 2021 with an all-time record of 45 Emperor's Cups.

And yes, it's nice to see Hakuho in a few of the pictures. There's Hakuho returning to his dressing room after winning a match on one page, followed by a relaxed Hakuho sitting and having his portrait taken on the next page.

Sumo is divided into 10 thematic sections ― chapters, if you will.

I really like the structure of the book, with each one-word section hammering home the point of one aspect of a sumo wrestler's life. Elegant simplicity might be the best way to describe it.

Noting where the Tradition section starts, I point this out because it's effective, in my view, to showcase this aspect of sumo after prefacing it with several other themes first.

The book's introduction spans 19 paragraphs on four pages. It's concise, but packed with vital information.

"Within the Japanese establishment exists a great sense of pride that during the last millennium very little about the sport has changed," reads one key passage from the introduction. "As Japan has surged forward into modernity, this corner of culture has remained anchored to ancient tradition. Sumo is an entity in which history, culture, pride and athleticism combine."


Showcasing a Life of Discipline

Obedience, which covers 10 pages, has a one-sentence explanation in both English and Japanese on the first page, followed by one picture apiece on each of the remaining pages.

"New recruits have to endure a life of discipline, obedience and hardships in order to progress and gain the acceptance of their seniors," reads the introduction to Obedience.

Lord K2 is passionate about his subject matter and dedicated to his craft. These are characteristics that shine through in this project, which he shot images for from 2015-17. He attended grand sumo tournaments, which was absolute must. Perhaps more importantly, he also gained access to document behind-the-scenes activities, such as the daily lives of sumo wrestlers at various stables.

As a result, in dozens of images he captures the daily rhythm of rikishi as they exercise, train, compete and even relax.

Nearly 100 photos appear in the book and less than 20 of them are from inside the big arenas during grand sumo tournaments. (Tokyo hosts three tourneys a year, with Nagoya, Osaka and Fukuoka handling one apiece.)


Therefore, the emphasis of Sumo's content is what happens at a training stable (beya) for aspiring and up-and-coming wrestlers and established grapplers.

Scratches and scars and blood and bruises appear on a number of the photos, giving an authentic presentation of what transpires in training sessions.

What else? Wrestlers' steely-eyed determination and other revealing facial reactions, including agony, enrich the overall presentation of what's usually the inner sanctum of sumo for the general public.


An Eye for Details

Lord K2's eye for details captured ring-entering ceremonies, salt-tossing (to purify the dohyo) before a match and, in 2016, Kyokutenho's danpatsu-shiki, also known as an official retirement ceremony, at Tokyo's Ryogoku Kokugikan. Kyokutenho humbly bows as he stands before a packed house and in front of six awe-struck boys who appear to be about 5 years old.

After glancing at this photo several times, I thought something Lord K2 said in the press release underscored a sumo wrestler's sense of duty, which also reminded me of the Kyokutenho picture.

"Those who dedicated themselves to the sport give not not only their body but their lives," the photographer declared. "They give themselves as a relic, an offering to the past masters and gods."


A Compelling Variety of Photos

There are 90 days in a calendar year (nearly 25% of time) when grand sumo tournament matches are scheduled.

The bulk of the book's images, however, are not focused on action from the six grand sumo tournaments. Instead, what happens the rest of the time supplies the foundation of Lord K2's project.

This collection of over 95 photos is sequenced rhythmically and poetically to give an insight into not only the drama and excitement of the tournaments, but also the dedication of the wrestlers and the sacrifices they make in order to have a chance to compete at the highest level.

Oh yes, there's light-hearted moments captured in the photographs, too.

Exhibit A: Near the book's midway point is a photo of Okinoumi Ayumi, often referred to simply as Okinoumi, who retired during the 2023 New Year Basho, standing on a skateboard as two fellow wrestlers look on with amusement outside of Hakkaku stable in Tokyo's Sumida Ward.


What's more, near the end of the book is a picture of a smiling rikishi holding a baby. The stark contrast in size between the gentle giant and the infant makes for a classic portrait.

"This book is a visual exploration of a world that most know very little about," Lord K2 says in the trailer.

To Learn More: Check the publisher's website, the author's online page, or any online bookseller.