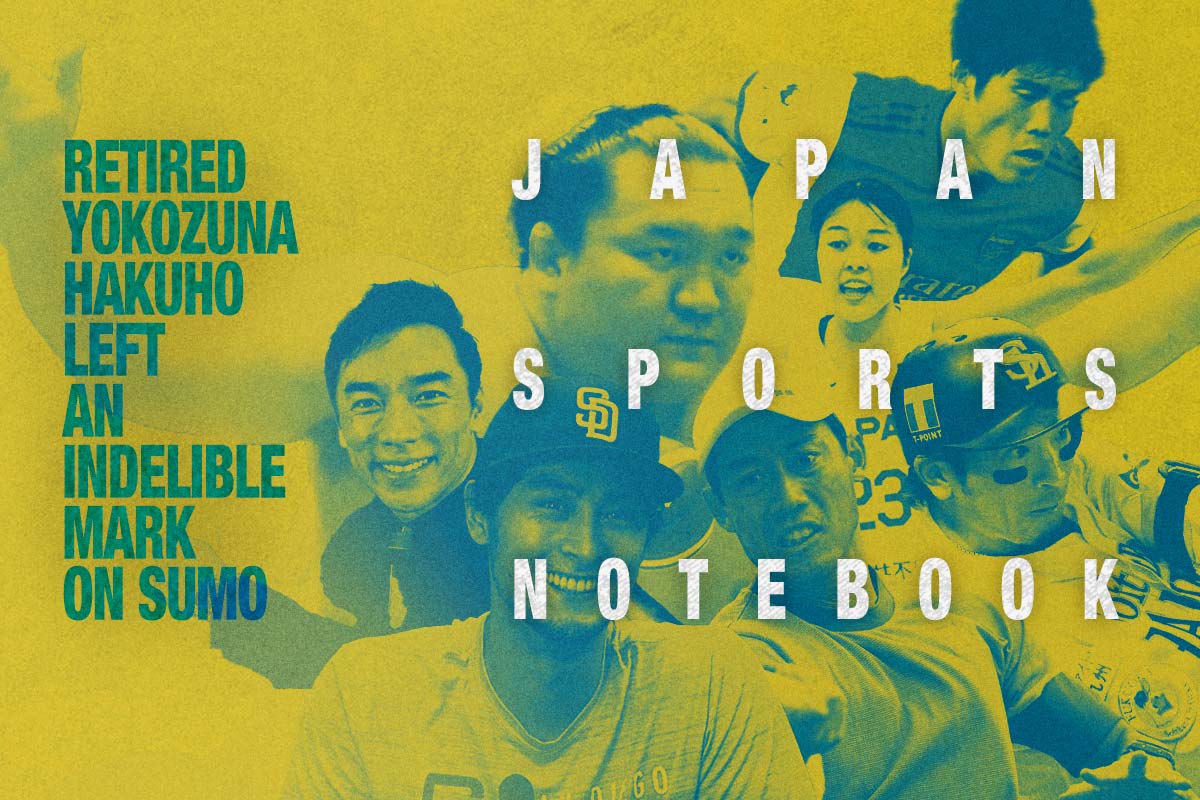 More than four years after moving into the No. 1 spot on the all-time wins list, yokozuna Hakuho authored one final glorious run.

The legend's 15-0 performance at the July Grand Sumo Tournament in Nagoya produced his last statistical record ー and with it a fitting conclusion to the Mongolian-born great's career.

The big news on Monday, September 27, a day after Terunofuji triumphed at the Autumn Grand Sumo Tournament, was the announcement that Hakuho was retiring. Three days later, the Japan Sumo Association's board of directors officially rubber-stamped Hakuho's request, setting the stage for the next chapter of his career in Japan's ancient sport.

Hakuho, who surpassed ex-ozeki Kaio on the all-time wins list when he recorded his 1,048th win in Nagoya on July 21, 2017, was unable to participate in the Autumn Basho due to two members of his stable contracting the coronavirus.

Hakuho, 36, will become a sumo elder, working at Miyagino stable and sharing the knowledge he's accumulated over the years in training and tournaments. According to the sport's traditional customs, upon retirement as a yokozuna his ring name was also retired. The JSA has approved his sumo elder name, Magaki.

Although he was scheduled to compete in September, Hakuho's decision to retire had already been made, and now he is “relieved,” he acknowledged at a news conference on Friday, October 1 at Ryogoku Kokugikan, where a big chunk of his record 1,187 victories took place.

"I made the decision on the 10th day of the Nagoya meet [in July]," Hakuho told a news conference.

"My target then was double-digit wins," Hakuho said in comments aired on public broadcaster NHK. "Once I got the 10th win, I told my stablemaster and all the others in the stable that I'm retiring after this meet."

Knee surgeries this March and in August of last year forced Hakuho to be sidelined from competition. And despite his perfect showing in July, he hadn't participated in a full 15-day meet over the previous six tourneys, missing four meets in their entirety and pulling out of two others before they wrapped up.

Injuries and the physical wear and tear of the sport took their toll on the Mongolian, whose given name is Monkhbatyn Davaajargal.

A perfect showing in July signaled to Hakuho that the time to transition to the next chapter of his sumo life should begin sooner rather than later.

The fact that newly promoted yokozuna Terunofuji has emerged as a success story, winning three Emperor's Cups this year, helped Hakuho make the decision to retire this year.

"I felt I could leave the rest to him," Hakuho was quoted as saying by Kyodo News. "I had two surgeries in about half a year and the doctor told me everything has been done, and it will be an artificial joint next time I hurt my right knee."

As an ozeki, Hakuho won his first career title in May 2006 at Ryogoku Kokugikan. Fifteen years and two months later, he won his record-extending 45th title.

Indeed, his sustained excellence, including a record 84 tournaments as a yokozuna, awed observers.

"It's an astonishing feat to have kept going as a yokozuna for 14, 15 years," former yokozuna Kitanofuji told NHK. "When Hakuho joined the stable he was thin, but built himself into a large heavyweight. He put in many times the effort of other rikishi, and this is something that should not be overlooked. He is a role model for all other rikishi."

Fellow Mongolian and former komusubi Kyokushuzan remains in awe of all that Hakuho accomplished as a sumo wrestler.

"Hakuho has maintained a glorious record for so long, I have nothing but respect for his hard work," Kyokushuzan told NHK.

Looking back on his career, Hakuho said Miyagino deserves credit for playing an instrumental role in all that he achieved.

"My stablemaster was really kind and his presence alone made me train [energetically], as I wanted to hear good words from him," Hakuho told the news conference. "That got me to become a sumo wrestler, to win promotion to ozeki and then yokozuna."

Following in the footsteps of Hakuho as a naturalized Japanese citizen, Ichinojo, 28, can become a stablemaster in the future.

In the Autumn Basho, Ichinojo had an 8-7 record

Forward Rui Hachimura, who's entering his third season in the NBA, was granted permission by the Washington Wizards to miss the start of preseason training camp due to undisclosed personal matters.

The Wizards, who opened training camp on Tuesday, September 28, made the announcement on social media two days earlier.

Washington, led by first-year head coach Wes Unseld Jr., plays its preseason opener on October 5 against the Houston Rockets. Its season opener is on October 20 against Yuta Watanabe and the Toronto Raptors.

"It's unfortunate he's not here, he's not with us," Unseld told reporters.

"But it also gives some other guys the opportunity to get on the floor and show us what they've got."

The Japan women's national team, coming off a silver-medal finish at the Tokyo Olympics, advanced to the FIBA Women's Asia Cup in Amman, Jordan.

Japan meets China in the final on Sunday, October 3.

Under new coach Toru Onzuka, who succeeded Tom Hovasse as bench boss, Japan entered the tourney with a shot at a fifth consecutive title in the event. Hovasse is now leading the Japan men's squad after previous coach Julio Lamas' departure following the Tokyo Olympics.

Well-traveled bench boss Tom Wisman, who guided the Tochigi Brex (now known as the Utsunomiya Brex) to a championship in the B. League's inaugural 2016-17 season, has returned to the sideline.

Wisman filled a coaching vacancy for the Gunma Crane Thunders, last season's B. League second-division champions, after Fujitaka Hiraoka left the club and took over as the Niigata Albirex BB's new coach.

A former Japan national team head coach, Wisman guided Gunma to a 75-69 overtime victory over the Brex in their first game in the top flight, aka B1, on Friday, October 1.

Matsuda's two-run shot in the third inning of the Hawks' 9-0 victory over the visiting Saitama Seibu Lions at PayPay Dome, made him the 44th player in NPB history to reach the milestone.

"I'm really happy to have been here for 16 years," Matsuda was quoted as saying by Nikkan Sports. "I think it's still a passing point, so I'd like to increase it one by one. I'd like to hit the 301st [home run] for the team's victory."

In celebration of homer No. 300, Matsuda treated teammates and staff to 300 slices of pizza in the team's clubhouse the next day.

Defender Takehiro Tomiyasu joined Arsenal in August on a long-term deal after suiting up for Italian Serie A club Bologna.

The 22-year-old’s energy and aggressive play on defense has paid immediate dividends for the Premier League club.

In his third match with Arsenal, the Tokyo Olympian excelled in a 3-1 North London derby victory over Tottenham on Sunday, September 26.

Former Arsenal captain Tony Adams took notice of Tomiyasu’s stellar performance, which earned him the Man of the Match recognition.

“I loved Tomiyasu, I thought his positioning today was excellent,” Adams told Sky Sports before weighing in on Arsenal’s overall play.

He continued: “They were exceptional all over the pitch. I like the shape today and they won every single header.”

Tomiyasu, who began his pro career with Avispa Fukuoka in 2015, leads Arsenal defenders in aerial duels won (14), one telltale sign of his stellar play since joining the club.  And since making his debut against Norwich City on September 11, Tomiyasu is No. 1 among Premier League defenders in duels won through Friday, October 1.

Takakura's stint in charge began in 2016. Her position ended after Japan's quarterfinal exit at the Tokyo Olympics.

Ikeda led Japan to the 2018 Under-20 Women's World Cup title. He also served as caretaker manager of the J. League's Avispa Fukuoka in 2012.

In his new coaching role, Ikeda, who turns 51 on October 4, begins preparing Nadeshiko Japan for the 2022 Women's Asian Cup, which begins in January, in India.

Two Clubs Setting the Pace in WE League

In the WE League's inaugural season, a pair of teams are the lone unbeaten squads after a month of competition.

There are 11 squads in Japan's first women's professional soccer circuit, and there are scheduled byes for teams throughout the season.

RELATED: SOCCER | WE League Ushers in New Era for the Sport in Japan

Keiji Suzuki was handed the Japan men's national team coaching reins to fill the vacancy following Kosei Inoue's departure at the end of the month, it was announced on September 27.

The All Japan Judo Federation selected the 41-year-old Suzuki to lead the team into the future after a successful end to Inoue's tenure at the Tokyo Olympics, where the host nation won gold medals in five of seven men's weight classes.

Looking ahead, Suzuki, the over-100 kg gold medalist at the 2004 Athens Games, said preparation will be a major component of his role as coach.

"I'll thoroughly research what judoka need to do to realize their dreams and put them into practice," Suzuki said, according to Kyodo News.

"I won't mold them into shapes, and will instead make use of their characters ... and enable them to fully display the skills they have."

RELATED: Kosei Inoue: After Tokyo 2020, Judo and Sports Will Remain My Contributions to the World

Kei Nishikori is sidelined with a lower back injury after pulling out of the San Diego Open on September 28.

Nishikori was scheduled to face Britain's Andy Murray in the first round on the same day.

The Shimane native reached the third round of the U.S. Open earlier in the month, falling to world No. 1 Novak Djokovic.

IndyCar driver Takuma Sato started in 16th place in the Grand Prix of Long Beach, the final race of the 2021 season. The two-time Indy 500 champion finished in ninth place for a solid result to conclude the campaign on Sunday, September 26.

Sato placed 11th overall in the 43-driver IndyCar standings this season. He had one top-five finish and placed eight times in the top 10, earning 324 points along the way.

The deadline to submit a bid to host the 2025 World Athletics Championships was Friday, October 1, and the Japan Association of Athletics Federations submitted the necessary paperwork before the deadline, according to published reports.

The New National Stadium in Tokyo, also called Olympic Stadium, is a state-of-the-art facility that has an influential admirer in World Athletics President Sebastian Coe.

On August 8, the final day of the Tokyo Olympics, Coe expressed his desire for a major athletics met to be held at the venue in the near future. And unlike during the Olympics when spectators were barred from nearly all events, Coe's remarks pointed to a showcase event in Japan's capital with a packed stadium.)

World Athletics has scheduled a March vote to determine the host of the 2025 worlds.

“When we’re talking about the team, cohesiveness is something that may help us out, moving forward. When we’re in a funk, when we’re not able to win games and we’re struggling, those are the times we need to come together and be cohesive and move forward.”

ーYu Darvish, a pitcher for the San Diego Padres, after the team's seventh straight defeat on September 28.

“It's a thrill to challenge the best in Europe. It feels like I have the Japanese flag behind me. I feel as if I am representing Japan at the Olympics!"

Jim Armstrong contributed to this article.