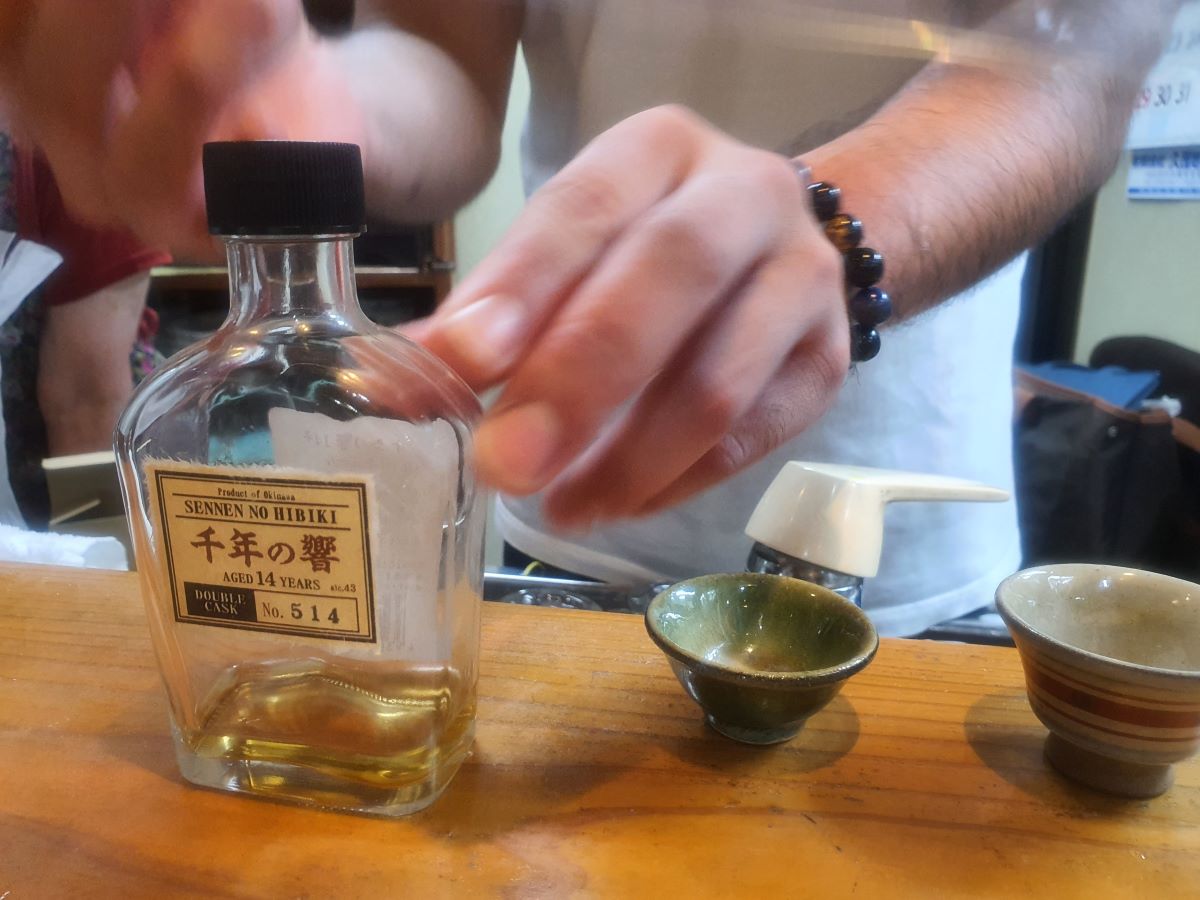 Habushu, a variety of Awamori made with a dead snake coiled at the bottom of the bottle. (Photo by Agnes Tandler)

Behind the counter sitting on wooden shelves are countless jars and over 800 bottles of Awamori. One of them has a dead snake coiled up in the bottom of the bottle. It is “Habushu“, the famous Okinawan snake wine.

Opinions about the alcoholic snake drink tend to differ. “It’s not very delicious,” warns Hiro, a high school teacher from Naha. When he was a child, Hiro was bitten by one of the island’s poisonous snakes and had to be taken to hospital for treatment. He survived, but has since been stuck with the nickname “Habu.”

The fate of the pit viper who bit him is less clear. Did it end up in a bottle of Awamori? “Possibly,” Hiro says and laughs.

While the dead snake looks on, Koji Higa puts a huge glass container of Awamori with mint, bitter gourd and lemon on the table. It’s an easy going, refreshing sangria type drink. The 36-year old, who runs Awamori Soko, a bar in the center of Naha, is passionate about the local spirit.

“We need to drink Awamori to be happy”, he explains. When he is off duty, Higa wears a LA Dodgers ’47 baseball cap that has nothing to do with baseball: “LA stands for Love Awamori,” he says cheekily and points to his black cap. “And 47 stands for the number of Awamori distilleries in Okinawa.”

Awamori is part of Okinawa’s unique culture. 50 years after the island reverted back from United States rule to being part of Japan, the drink has not lost any of its popularity on Japan’s southernmost main island. But people like Higa hope for more.

Okinawa’s local spirit counts as the oldest distilled alcoholic drink in Japan. It is served in tiny ceramic cups. “We like to sit close together, that is why the cups are small,” explains Hiro. And there is doubt about this.

At the Awamori bar people are already raising their tiny Awamori cups like old friends reunited after a long absence. While the rest of Japan sticks to kampai (“empty the glass”) Okinawans prefer their own cheers: “Karee,” which means “I wish you lots of happiness” in Okinawan dialect.

The tiny cups make it easy to lose track of the amount of free flowing Awamori drinks. Worse, the cups are poured from a special decanter called karakara, making it even more difficult to keep tabs on the overall Awamori consumption.

“Karakara is the sound the carafe makes when it gets empty,” Hiro remarks. “The vessel calls out to be refilled.”

Traditionally, Awamori is consumed like whisky ー straight, on the rocks or mixed with hot or cold water. But Awamori is a highly versatile drink.

Like whisky, Awamori can be stored long-term and aged to perfection with complex mellow flavors. It is traditionally stored in clay pots, a process that Okinawans call “letting it sleep,” which allows the spirit to mature, becoming richer, softer and sweeter in the process.

Unlike its younger cousin Shochu, another Japanese spirit, Awamori is only distilled once. Shochu can be made from a variety of base ingredients like rice, sweet potatoes, barley, sugar cane, buckwheat or even carrots. So it needs to be distilled twice to clean out impurities. Awamori, however, is strictly rice based.


Careful What You Wish For

Because Awamori is distilled, it is a lot stronger than sake, Japanese rice wine. As a fermented beverage, sake has a lower alcohol content of around 13 to 16 percent. In contrast, Awamori’s alcohol content ranges between 25 and 43 percent.

Some types like Hanazake from Yonaguni Island reach 60 percent and are even flammable. The name Hanazake derives from the way the potency of Awamori was measured in the old days, by pouring it into a glass from a certain height. When the alcohol content was high, it produced the largest amount of bubbles. The strongest spirit came to be called Hanazake, because the bubbles look like flowers in full bloom.

At Zuisen distillery located near the historic Shuri castle in Naha, distilling is in progress in large heated tanks and the air is filled with the scent of Awamori.

The factory has been producing Awamori for more than 135 years. Named after a spring near the castle’s Zuisen gate, it specializes in Awamori aged for three years and longer. “Some people believed that Awamori would not survive once Okinawa was returned to Japan,”  explains Takeshi Sakumoto from the distillery. “But it is our tradition.”

Awamori´s roots can be traced to the island’s long trading history with China, India, Thailand and other parts of Asia at the time when Okinawa was the independent kingdom of Ryukyu.

Long grain Thai rice is soaked in water and sprinkled with black koji mold. The mixture is then fermented with water and yeast, before undergoing a single distillation to finish the process. Black koji mold (Aspergillus awamori) is indigenous to Okinawa and essential in the Awamori making process.

The mold starts to break down the starches in the rice and creates sugars and a large amount of citric acid for fermentation. The citric acid also helps to keep bacteria at bay during fermentation, which is a plus in Okinawa’s hot and humid climate.

Okinawa gets an average of 1,817 millimeters of rainfall a year, a lot more than other parts of Japan.

Although the technique for creating Awamori has not changed, distilleries are trying out new ways to enjoy Okinawa’s signature spirit. Smoother, sweeter varieties have emerged that are easy to drink. Distillers blend different Awamori types and add flavors such as caramel and dried fruits to create new aromas.

“Awamori has long been regarded as a drink that gets you drunk,” says bar owner Higa. With the new range of varieties, Higa has started to pair Awamori drinks with Okinawan cuisine. He serves not only Goya Champuru, a stir fried dish with bitter gourd, pork and bonito flakes, but also other local specialities, like tofu made from peanuts, or Minudaru ー steamed pork loin with a paste of black sesame, Awamori and Okinawan brown sugar.

The Okinawan spirit has survived and found a new lease of life.