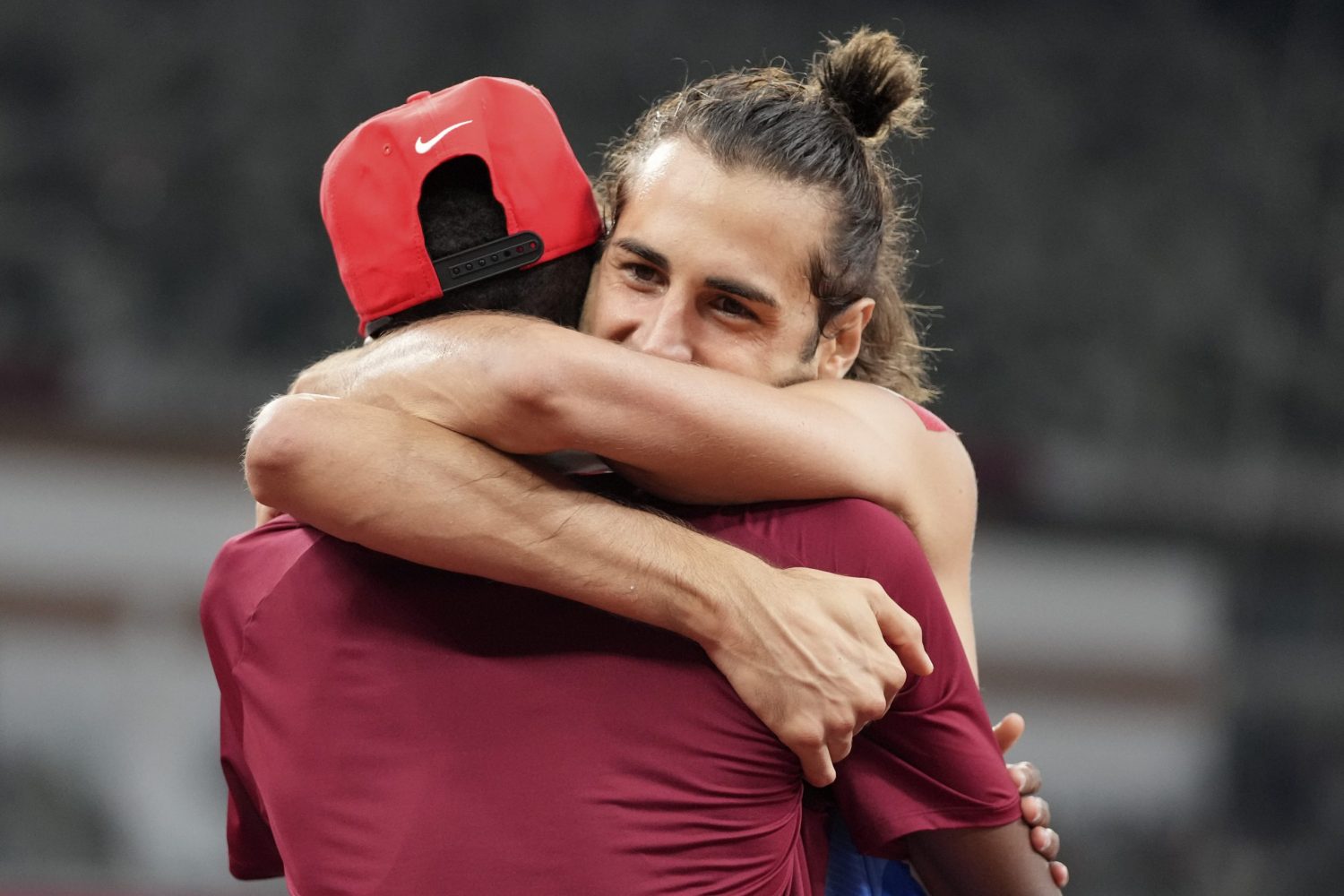 With the Olympics, we are used to seeing the mantra: there can be only one person at the top.

Yet in a spectacle of sportsmanship and friendship, things went a little differently in the men’s high jump final on Sunday, August 1.

Tamberi and Barshim reached the final stage of the competition, after nearly two hours, with equal performance. Both had achieved every jump up to the best of 2.37 meters. Then, three times each, they both failed to clear 2.39 meters.

With the impending men’s 100-meter final set to start, the official asked the two athletes what they would like to do. “Can we have two golds?” Barshim asked him.

The two athletes reached an agreement, the official gave his blessing and the rest is history. This is the first time two athletes share the podium in athletics since the 1912 Stockholm Olympics.

“I can’t believe this! I have passed through infinite difficulties, but I made it here. I have won the Olympics, I will never sleep again,” said Tamberi, completely beside himself with joy after the competition.

The 29-year-old Tamberi is the only Italian to have won the European championships indoor (2016) and outdoor (2019). The son of Marco Tamberi, who was a finalist in the high jump in Moscow in 1980, he has been chasing the Olympic dream since London 2012, when didn’t get past the qualifying round.

Barshim, 30, is one of the world’s best high jumpers. Silver medalist in Rio de Janeiro in 2016 and bronze medalist in London in 2012, his 2.43-meter leap in 2014 set the Asian record and was the second-highest jump of all time.

After meeting at a competition in 2010, the two international athletes bonded in a spirit of competition and understanding.

“Me and Barshim have been through the same injury, I would have shared the medal only with him,” revealed Tamberi following the final.

In fact, for both high fliers the road to Tokyo hasn’t been easy. Tamberi tore an ankle ligament in a competition in Monaco in 2016, just weeks away from the Rio de Janeiro Olympics, where he had been one of the favorites. Barshim was among those who supported him at the time, even when the Italian came back to compete but was failing to achieve his pre-injury results.

Then the roles reversed in 2018, when Barshim also tore a ligament in his ankle while attempting to break the world record with a 2.46 jump in Hungary.

Fast forward five years, and with an extra year to prepare, both athletes are in Tokyo, in a competition which has turned into a double win and a double celebration.

“I have been through a lot. It’s been five years that I have been waiting, with injuries and a lot of setbacks. But we are here today sharing this moment and all the sacrifices. It’s really worth it now at this moment,” said Barshim.

As Barshim hugged his coach, Tamberi collapsed in a cry on the track, holding the leg cast he wore after his surgery in 2016. In sharp black marker writing on the cast reads: “My Road to Tokyo 2020, 2021.”

Just 10 minutes later, fellow Italian Lamont Marcell Jacobs went on to become the fastest man in the world in the 100-meter final, the first time Italy has ever grabbed the title in the Olympics.

After the winning sprint, Jacobs talked about how he was inspired by the feat of his friend and colleague Tamberi. “I had nothing to lose, and when I saw Gimbo (Tamberi) winning gold a couple of minutes earlier, I was so pumped. I thought ‘Why can’t I do that too?’ And so I ran. I ran as fast as I could.”

Tamberi and Barshim showed us sports at its best. And with it, the power it has to inspire.