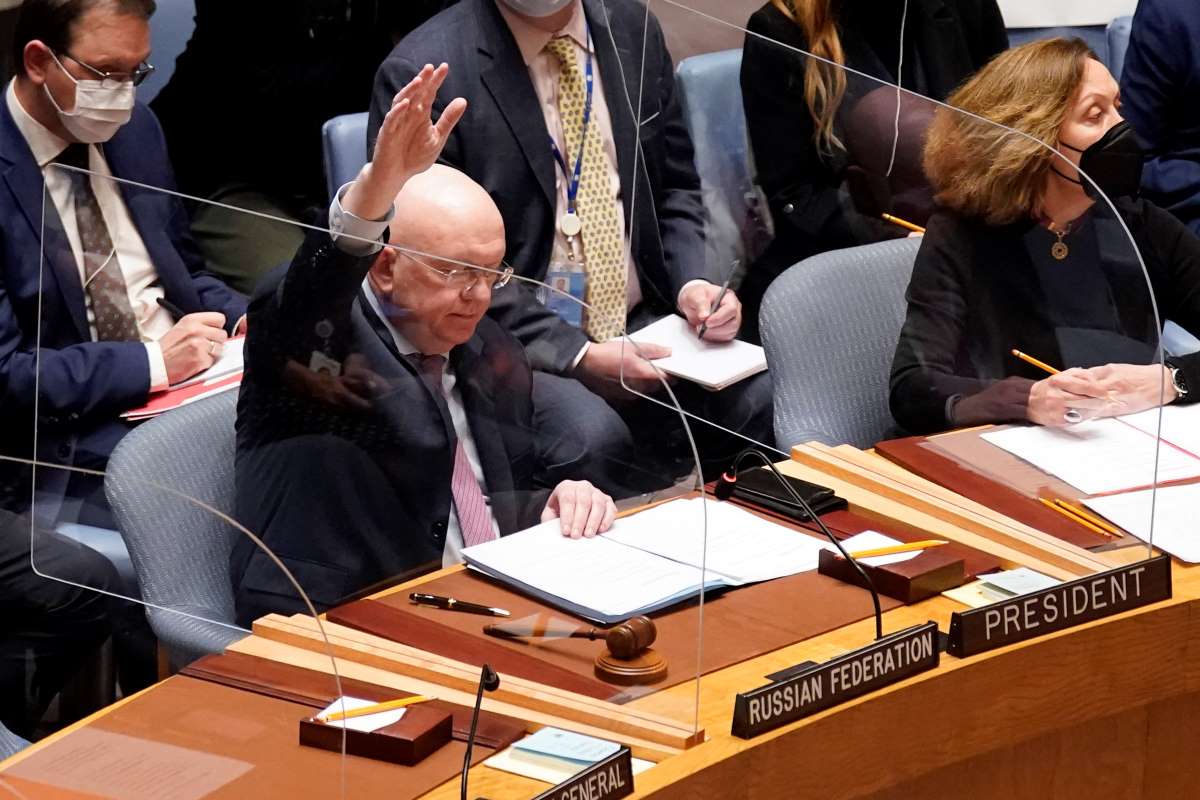 Russia's U.N. Ambassador Russia Vasily Nebenzya casts the lone dissenting vote in the United Nations Security Council, Friday, Feb. 25, 2022. Proposals to change the council's structure or rein in the use of vetoes have sputtered for years. But this time, a new approach appears to be gaining some traction. (AP Photo/Seth Wenig, File)

A step is about to be taken toward reforming the United Nations Security Council (UNSC), a body whose powerlessness has been blatantly exposed in Russia’s invasion of Ukraine.

A resolution will soon be adopted by the United Nations General Assembly aimed at the five permanent members of the Security Council: the United States, Britain, France, Russia, and China. It will require any UNSC member who invokes their veto right to report to the General Assembly in a plenary session and account for their position.

It is especially significant that the United States, one of the five UNSC members with veto privileges, is among the co-sponsors of the draft. This can be taken as a manifestation of Washington’s intention to see more restrained use of veto powers.

Japan also has joined the list of co-sponsoring nations. This country should step into the lead to ensure the resolution connects to the broader push for drastic reforms of the United Nations.

On February 25, a resolution condemning Russia for invading Ukraine was brought before the Security Council, calling for the immediate withdrawal of Russian troops. It was scrapped, however, when Moscow used the power of its permanent seat on the UNSC to veto the resolution.

In March, another resolution seeking improvements in the humanitarian circumstances of Ukrainians was considered. This time, the sponsors anticipated Russia’s threat to use its veto power again. Instead of confronting the UNSC, the resolution was adopted by the United Nations General Assembly, not the Security Council.

Russian forces have destroyed a large swath of Ukrainian cities, deprived a great number of citizens of their lives, and created floods of refugees in and outside Ukraine. The Ukrainian President’s remarks must be taken seriously.

The Security Council has a major responsibility for global peace and security. It is therefore the only United Nations agency with a mandate to determine compulsory enforcement measures, such as legally binding economic sanctions.

If the Security Council is impotent, the suffering of humankind would be tremendous. The problem is not only the issue of veto rights, but also one of indispensable drastic reforms.

For years, Japan has been striving to secure a permanent seat in the Security Council in the framework of the Group of Four (G4) nations, including Germany, India, and Brazil. The five existing permanent members of the Council are the victorious powers of World War II, and the United Nations Charter has retained “former enemy state clauses” in reference to Japan, Germany, and other defeated nations.

If there is to be steady progress on UN reforms, it would be realistic to start by moving forward where possible — for example, with the proposed resolution to restrain the use of veto rights. What is important is to link these steps to broader reforms, such as expanding the number of seats for permanent members on the Security Council and abolishing the enemy state clauses.